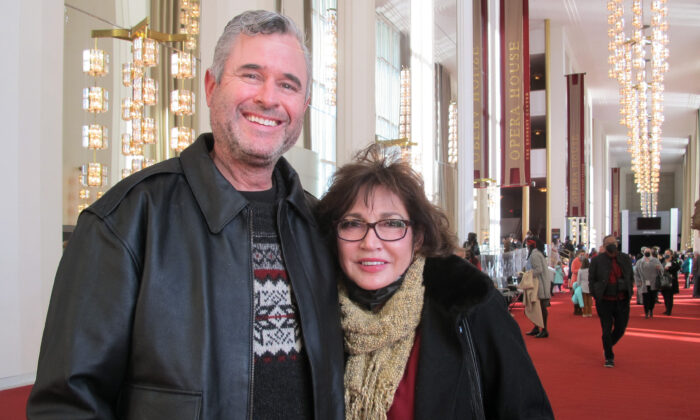 Mr. Ellis, a foreign service officer and attorney with international experience in law enforcement, has worked in Central and South America.

Shen Yun’s spiritual message touched him. “I think that spiritualism and religion also speak to people in the United States because, in this country, we do tend to be generally a very religious country and a very religious people.”

Shen Yun’s mission is to revive China’s 5,000 years of civilization—a civilization based on a deep belief in the connection between humankind and the divine—and share it with the world. The company aims to do this by utilizing ancient Chinese art forms on the stage such as classical Chinese dance, bel canto singing, and music from instruments that are unique to the nation and all capture its spirituality.

The spiritual message also touched Mrs. Ellis, a freelance interpreter. “That’s the one aspect that I really like because, due to communism, they have taken that part of the culture away from it, and seeing it really is inspiring.”

She was happy Shen Yun is giving this to the world. “I think that it is an excellent thing they’re doing to show the world how China was before communism, how much [China] had to contribute to the world with a rich culture and very, very old history that unfortunately, because of communism, we have not been able to enjoy freely.”

In fact, Mrs. Ellis’s biggest takeaway was learning how rich the culture was that Chinese people had.

The Ellises liked the positive message Shen Yun gave to its audience.

Chinese culture was presented in a “very positive way. Definitely reminds you of the history of China and the culture and just the liveliness of the people of China,” Mr. Ellis said.

He could sense “the inner beauty and energy when they dance.”

Mrs. Ellis liked how the music and movements of the dancers worked together. “I was quite amazed by the synchronicity of the music by the orchestra and the movements of the performers, all beautifully done.” She said it made her “very, very relaxed, with a sense of communion.”

Her husband noted the need for compassion in the world that the performers presented. “I think compassion is a trait that we need in the world. And it’s something that is universal. It’s something between countries that is important for us to live together here on Earth.”

He said the performance gives the audience something deeper: “The performance is more than a performance. It touches people inside and makes us think about who we are and where we come from.”