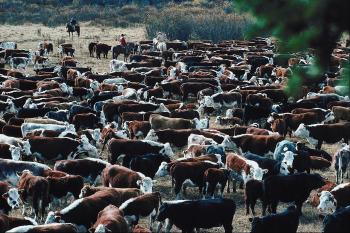 Mandatory-vaccine promoters treat American citizens as ignorant cattle, unable to understand the virtues of their plan for the United States and the world. (Photos.com)
Health

This is the second part of a three-part series. You can also read Part 1 and Part 3.

Those pushing mandatory vaccination for an ever-growing list of diseases are a mixed bag. Some are quite sincere and truly want to improve people’s health. They believe the vaccine-induced herd immunity myth and likewise believe that vaccines are basically effective and safe. These are not the evil people.

A growing number are made of those with a collectivist worldview who see themselves as a core of elite wise men and women who should tell the rest of us what we should do in all aspects of our lives.

They see us as ignorant cattle, unable to understand the virtues of their plan for the United States and the world. Like children, we must be made to take our medicine since in their view, we have no concept of the true benefit of the bad-tasting medicine we are to be fed.

I have also found that a small number of people in the regulatory agencies and public-health departments would like to speak out but are so intimidated and threatened with dismissal or destruction of their careers that they remain silent. As for the media, they are absolutely clueless.

I have found that “reporters” (we have few real journalists these days) rarely understand what they are reporting on and always trust and rely upon people in positions of official power, even if those people are unqualified to speak on the subject. Most of the time they run to the Centers for Disease Control or a medical university to seek answers.

I cannot count the number of times I have seen university department heads interviewed when it was obvious they had no clue of the subject being discussed. Few such professors will pass up an opportunity to appear on camera or be quoted in a newspaper.

One must also appreciate that reporters and editors are under an enormous economic strain, as vaccine manufacturers are major advertisers in most media outlets and for an obvious reason—they control content.

A number of excellent stories on such medical subjects are spiked every day. That means we will always be relegated to the “fringe” media as our media outlets are called. Despite the high quality of the journalism in many of the “fringe” outlets, they have a much smaller audience. Despite this, we are having an enormous effect on the debate.

This is the second part of a three-part series. You can also read Part 1 and Part 3.

Next week: Part 3, “As the Public Awakens, the Collectivists Become Desperate“

Dr. Blaylock is a board-certified neurosurgeon, author, and lecturer.