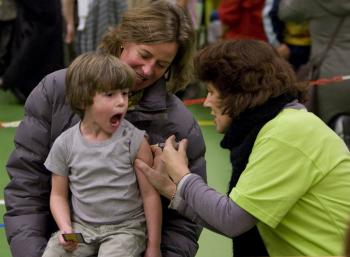 By Mimi Li
Print
Flu shots triggered seizures in young Australian children, causing more harm than benefit, according to a study released this week in the epidemiology journal Eurosurveillance.

The flu vaccine, more commonly known as Fluvax, produced about four cases of febrile seizures per 1,000 vaccinated children in Australia during the months of March and April 2010, according to the report.

Side effects from the trivalent inactivated influenza (TIV) vaccine manufactured by CSL Biotherapies prompted Western Australian officials and later the governments of Australia and New Zealand to suspend child vaccinations in April 2010 after they discovered a high hospitalization rate of young children who were vaccinated with Fluvax.

Epidemiologists determined that Fluvax’s effects were significant, since other TIVs only caused zero to 0.3 cases of febrile seizures per 1,000 children vaccinated.

However, the study reiterated that the seizures were caused by one specific drug by one manufacturer, and that it found no evidence that other flu vaccines were harmful.

“Our results therefore indicate there is no excess risk over benefit with a childhood influenza vaccination [program] in general. The problem identified in 2010 was related to a vaccine produced by a single manufacturer,” scientists said.