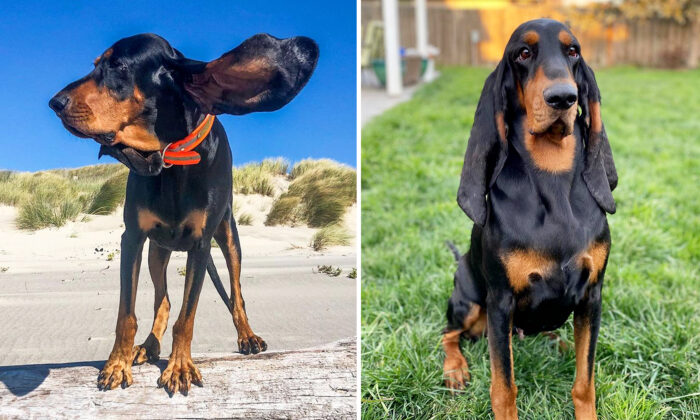 A floppy-eared black and tan coonhound from Oregon has broken the Guinness World Record for longest ears on a dog, with each one measuring 34 centimeters (13.38 inches) in length. Her proud owner claims the big-eared beauty is an “ambassador” for her breed.

“The response has generally been a resounding, ‘We knew it!'” Lou’s owner Paige Olsen, a licensed veterinary technician who lives outside of Portland, told The Epoch Times, “and really, without the prompting from our Instagram followers, we may not have even attempted the record at all.”

Bolstered by her 3-year-old dog’s following, Paige applied for the record and scheduled an “official measurement” of Lou’s ears with a licensed veterinarian and multiple witnesses, as per protocol. The measurement was taken in their hometown of Portland on July 30, 2020, and after submitting her supporting materials, Paige waited for word from Guinness World Records.

Family and friends were over the moon when the good news came through.

According to Paige, 30, while Lou is an outstanding pup, all coonhounds—typically bred for their hunting and tracking skills—should have ears that extend at least to the tip of their nose.

“Their long ears drag on the ground and stir up scents when they are tracking, out in the field,” she explained to Guinness Kids. “It makes them great at following long, very old, or ‘cold’ tracks that other breeds of dog may not pick up on.”

While Paige and Lou were unable to celebrate with the Guinness crew in person owing to Covid-19, the doting owner has reflected on their journey together, since adopting the pup at just 12 weeks old.

“I met Lou first when she was an 8-week-old puppy, but I was not intending to bring her home,” she told The Epoch Times. “Lou already had plans to live with another family, but through a series of events, she ended up with me, instead!”

Describing Lou’s personality and the bond she shares with her, Paige said: “The puppy months are not for everyone, but she never really went through a ‘naughty puppy’ phase … I love her dearly. I think we both enrich each other’s lives and bring mutual companionship.”

Paige claimed that her “goofy, fun” coonhound has become a wonderful companion whom she can take anywhere. Lou loves food—especially crunchy dill pickles—is a sucker for a soft, cuddly couch, and sleeps with Paige every night. Equally active, she also loves hiking, lure coursing, and performing tricks.

Acknowledging that not every dog breed fits every lifestyle, Paige hopes that other dog lovers will do their research before deciding which one to adopt. Ultimately, having a dog, she says, is a “wonderful thing.”

“I hope that Lou brings some kind of joy to people’s lives and encourages them to get out and do something special with their own pets, whatever that may be,” Paige said.

As for Lou receiving her special recognition, Paige said: “I’ve enjoyed Lou’s special moment of recognition, but I really can’t take any kind of credit for her award. She’s a wonderful dog and ambassador for the breed, and I’ve had a great time helping the world see how great she is!”