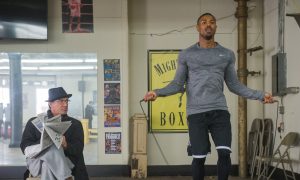 Welp, it’s another Navy SEAL movie. “Without Remorse” is a screen adaptation of Tom Clancy’s bestselling 1993 novel, and decorated Navy SEAL Senior Chief John Kelly (Michael B. Jordan of “Creed” fame) is the SEAL in question, who lives with his wife in Washington, D.C.

This is actually an origin story that shows us how John Kelly turns into John Clark, who is one of Clancy’s major characters, and who is portrayed by Willem Dafoe in “Clear and Present Danger” and Liev Schreiber in “The Sum of All Fears.”

Kelly’s about to quit naval special forces and work for a private security firm when a terrible mishap befalls him. The incident will, of course, allow action-movie fans to relish him utilizing all his very dangerous skills. What else would such a movie be about?

The film might have been a good opportunity to make a statement about global politics since it’s directed by Stefano Sollima, who previously directed 2018’s “Sicario: Day of the Soldado” (wherein the drug war on the U.S.-Mexico border escalates due to cartels trafficking terrorists across the U.S. border), and it’s co-written by Taylor Sheridan, who wrote both “Sicario” films. Which makes this the perfect team to tell a dark and dirty geopolitics and conspiracy tale, but “Without Remorse” is not that movie.

John’s pregnant wife (Lauren London) and their unborn daughter are killed in their home (John is critically injured), in an ambush that was meant to take John out. Except that he, on this particular night, was sleeping on the couch wearing headphones when the hit went down.

A team of assassins are taking out John’s entire SEAL team because, while in Aleppo, they happened to attack the Russian military (instead of the Syrian), due to being fed deviously altered intel. Why? They got used. And now here come the Russians retaliating against the United States, as was the plan by politicians who use the military as expendable pawns. John, of course, becomes determined to avenge all these deaths.

Following his rehab, and assisted by fellow SEAL Lt. Cmdr. Karen Greer (Jodie Turner-Smith), Kelly tracks down the Russian diplomat responsible for all the mayhem. What Kelly learns could have possible international repercussions, and so Secretary of Defense Thomas Clay (Guy Pearce) wants to head off further mayhem at the pass.

Clay tasks Greer and CIA analyst Robert Ritter (Jamie Bell; Henry Czerny played Ritter in “Clear and Present Danger” as the ultimate weasel) with putting a team of operators together to handle the situation. Clay wants Kelly on the op regardless of Greer’s objection that he’s too emotional; Clay feels Kelly’s revenge motivation will allow him to go beyond the call of duty to get the job done. Unfortunately, it’s pretty simple to figure out who the mysterious string-puller behind the U.S.-Russia discord is.

The family preparation scenes are scant and perfunctory, but the good news is that “Without Remorse” is all about the action, and the action set pieces will hold your attention, as will the charismatic, physical specimen Michael B. Jordan—ditto for Jodie Turner-Smith’s no-nonsense Lt. Cmdr. Greer, who war-fights with the best of them. As far as I know, female Navy lieutenant commanders exist, but there are as of yet no actual female SEALs. But movies make magic, and Turner-Smith sells the heck out of it.

What else? You get every kind of combat, every which way: guns, knives, grenades, jiu-jitsu rear naked chokes, on sea, earth, air, and land (which is what SEAL stands for). You’ve got your vehicular detonation, vehicular water coffins, Russian fighter jets blowing an American plane out of the sky, and buildings going boom. As the lyric goes, “Let the bodies hit the floor.”

One fun thing I don’t believe I seen before is Kelly’s interrogation technique of putting himself in the exact same deadly situation the bad guys are in: He torches a car and then hops in the back seat, interrogating the bad guy while the vehicle slowly blazes toward a gas-tank explosion. He drives a car off a bridge and then sits unflappably on the bottom of the river, while the car quickly fills with water, interrogating the bad guy. He’s a SEAL. He’s very comfortable in water. Fire too, apparently. Guess that makes him a SEALF.

Although it has a few fun bait-and-switch scenes, it doesn’t, as mentioned, really shed light or offer solutions on global diplomacy or the American military. But then I haven’t read Clancy’s book, and if it’s not in the book, there’s no reason for any such high-minded expectations to be in the movie.

Lastly, it sets up at least one sequel, and if they bring back Jordan, they need to bring back Turner-Smith as well—their chemistry is worth the rental price.

Mark Jackson is the senior film critic for The Epoch Times. Mark has 25 years experience as a professional New York actor, a classical theater training, a BA in philosophy, and recently narrated the Epoch Times audiobook, “How the Specter of Communism is Ruling Our World”: https://www.thespecterofcommunism.com/en/audiobook/
Rotten Tomatoes page: https://www.rottentomatoes.com/critic/mark-jackson/movies