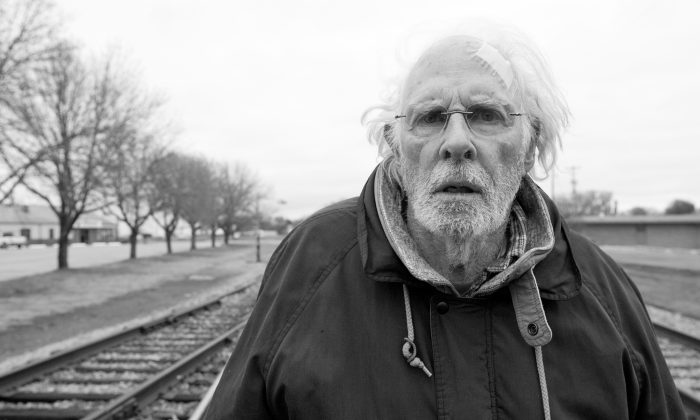 In the film “Nebraska,” Woody Grant (Bruce Dern) sets out to walk from Montana to Nebraska in order to claim what he believes is a million-dollar prize. (MMXIII Paramount Vantage, A Division of Paramount Pictures Corporation.)
Entertainment

The same director who scored big with the brilliant “Sideways” fumbles with “Nebraska.” Yes, there’s been Oscar talk regarding “Nebraska.” Forget about it. “Sideways” was a hit. “Nebraska” is a miss.

“Nebraska” is like a particularly bleak Edward Hopper painting come to life: dismal, desolate, and depressing.

Eighty-something Woody Grant (Bruce Dern) has clearly turned the corner into senility. His life has narrowed to an obsession about collecting on that type of pathetic million-dollar sweepstakes letter Americans exit the womb recognizing as a hoax. Problem is, at life’s end when we’ve lost our minds, we become suckers, and as P.T. Barnum said, “There’s a sucker born every minute.”

Woody’s folks keep catching him out wandering along roads in Billings, Montana. Where’s he going? He’s going to claim his million dollars, by golly. Yep. In Nebraska. He’s just gonna walk there.

His long-suffering, feisty wife (June Squibb, stealing every scene she’s in) has a phrase for this behavior: “You dumb cluck!!”

Son David (Will Forte) is a going-nowhere-fast stereo salesman. Having picked up his freeway-tromping dad one too many times, he decides a sweepstakes-collecting road trip with the old man is in order. Neither one has much left to lose. Isn’t that sad? But then, that’s life. The sad thing here is boring storytelling.

To Grandmother’s House They Go

But not before we get treated to a bit of stultifying back-story. And then it’s off to Nebraska. Remember Nebraska? This is a movie about Nebraska.

That’s where all Woody’s antediluvian former cronies and sneaky relatives live, who naturally (and immediately) set about trying to separate him from his, as of yet, unclaimed millions.

Underway, they stop off to see Mt. Rushmore. Woody’s underwhelmed. Woody loses his false teeth. When they find them near some railroad tracks, they both take turns pretending they’re not his. Good times.

The whole fun-filled family finally arrives in Nebraska at the home of dad’s monosyllabic brother—mom and Dave’s better-adjusted anchorman sibling having followed them. Various long-unseen relatives are parked on a couch, watching a Bears-Packers game.

Two trucker-hatted, side-burned, fast-food-bellied cousins (Devin Ratray, Kevin Kunkel) have devolved into classic arrested-development knuckle-dragging freeloaders, who immediately take to dissing David’s driving. “It took you (snicker) how long to get here?” They do community service. For committing rape.

Woody and David bond feebly, Woody’s old grease-monkey colleague Ed Pegram (Stacy Keach) tries to squeeze Woody for money, and the town welcomes its returning hero by putting Woody’s picture in the local paper. Woody gets a standing ovation at a restaurant for being a millionaire. Except that he’s not one yet. Woody might yet score a Prize Winner hat. But we won’t say for sure.

Finally we get about two minutes’ worth of real drama and tension when Woody’s nag wife defends him from the vulpine relatives. The other 113 minutes of “Nebraska” is watching grass grow, to a plaintive and melancholy score.

Will Forte looks very much like Peter Krause of “Six Feet Under,” and therefore much too intelligent to play a character with a dead-end job and a dismal romantic life.

There’s a running crescendo-deflation gag, where Woody responds to excited inquiries with (slight pause) “Huh?” All of which are meant to be comedic, but played too deadpan by Dern, they simply serve to make one cringe at the prospect of losing one’s mind.

Everything about these characters and locations is about the non-Hero’s Journey, as it were—life lived terminally inside the village compound, with no aspirations to anything other than a bit of comfort, and being drearily okay with that. It is possible to make an exciting movie about unexciting lives. But “Nebraska” is not that movie.