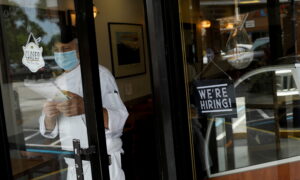 “Minari” did for the 2021 Academy Awards what the pop song “Gangnam Style” did for music in 2012; it gave notice to America that Korea can come over here and throw down an artistic gauntlet on our own turf. Not only can Korea play in our movie and music playgrounds, but it can also score big—in this case a best supporting actress Oscar.

Jacob, by trade, inspects baby chickens at a poultry farm (more like a chicken Auschwitz, replete with smoke billowing from heaps of incinerated baby roosters who are of no monetary use to human society). He determines their sex; his wife also does this.

Jacob understandably hates this job and intends to use the family’s new stretch of 50 acres to grow the kinds of vegetables that local Korean-Americans have a hard time getting their hands on.

It’s a good plan; he’s put in the research and informs Monica that if things go as planned, “In three years we can quit chicken sexing.” Monica, however, is appalled at their living conditions. They gave up a supportive Korean community and regular work in California to live in a double-wide trailer in tornado land.

She despises the wheels on it, and labels the entire situation as existing in “this hillbilly place.” One can palpably access the Edward Hopper-like loneliness of America as experienced through her foreign sensibilities.

To give Monica a helping hand, they invite her mom, Soonja (played by Korean screen legend Yuh-jung Youn who won for best supporting actress), to come live with them, in traditional Asian style. She arrives bearing gifts: deer antler broth, anchovies, gochugaru (chili peppers), and that for which the movie is named—the minari plant. Minari (“water celery”) is a leafy green vegetable that is used in Korean cooking; it’s sort of an edible weed that grows near water.

Little David initially doesn’t like grandma. She doesn’t bake cookies like a normal grandmother, and she swears too much. He’s averse to having to sleep in the same room with her because she “smells like Korea,” but she immediately captures the audience’s heart with her mixture of irreverent elder wisdom, mischief, and humor. Monica: “I’m sorry you have to see how our life is now.” Soonja: “Are you crying again? Why? Because the house has wheels? It’s fun!”

Grandson David is a chronic bed-wetter, and grandma teases him about it. She also makes terrible-tasting Korean herbal tea for his heart condition. (He has a small hole in his heart.) David flushes the tea down the toilet and then gets practical-joke revenge on grandma’s making fun of his bed-wetting: He wees in the cup instead, and when grandma’s distracted with watching professional wrestling on TV (“Somebody will get killed!”), David replaces her tea-cup with his pee-cup. He gets the intended reaction, but grandma also appreciates a good practical joke, and eventually they become fast friends.

So David’s got a heart defect, mom’s lonely, frustrated, and angry, dad is harried and put-upon, and grandma is frail. They have no choice but to bear these crosses. However, friendly neighbor Paul (Will Patton), who offers to work for Jacob, dispensing many prayers, exorcisms, blessings, and speaking in tongues—likes to bear an actual life-sized wooden cross up and down the backwoods dirt roads on Sunday. That’s his form of church.

There’s perhaps a nod to Robert Redford’s “The Milagro Beanfield War,” where the main character, Joe Mondragon, steals forbidden government water to irrigate his crops. Jacob, pooh-poohing the advice of a local water dowser about how to find water—finding that much too witchy—tells son David that Koreans will use their heads and scientific deduction to not have to pay for superstitious water divining. When the well he deduces eventually runs dry, Jacob ends up using the family trailer water to irrigate crops.

Monica tells her mom, “He thinks I don’t know.” They soon have no shower or cooking water. Speaking of water, three of the Chinese five elements theory of wood, fire, earth, metal, and water are well-represented in the film—their ability to nurture and also to destroy the plans of humans.

“Minari” is timely: The Yis’ white neighbors are quite nice. Sometimes, though, largely due to the harmless naiveté of children, the occasional ignorant comment or assumption crops up, such as: “Why’s your face so flat?” “It’s not.” “Wanna sleep over at my house?”

One cute instance is a little girl in church who approaches the Yis’ daughter, Anne, and tries to “speak her language,” asking Anne if she can let her know if she gets a word right. She speaks some gibberish of the “ching-chong” type and eventually hits on an actual Korean word. When informed of its meaning, the delighted child says, “That’s so cool!”

So basically, while Jacob and Monica fight constantly throughout the film about whether Jacob is putting the farm before the family, much of how their life ends up running its course is dictated by fate, and as mentioned, the elements have much to do with this. In a sense, the film’s characters are bystanders in their own story. The only real cultural assimilation we see is the family going to church, and hard-headed Jacob finally coming around to the rural Arkansan cultural method of locating water.

The minari plant is obviously significantly symbolic. The essence of its character is that it endures hardship well. And so this would fundamentally be a lesson about going with the flow, since nature ultimately decides things, as well as the ability to endure, forbear, and stay the course in life.

The Golden Globe Awards disqualified “Minari” from the best drama category, due to its having too much spoken Korean. But it’s kind of a tough call: Most of the cast is Korean, and yes, it’s mostly in Korean with subtitles, so it was treated as a foreign language film, yet its director, Lee Isaac Chung, is Korean-American. It was produced by American companies (and Brad Pitt), takes place in Arkansas, and basically explores the American immigrants’ problem of how to assimilate while holding on to one’s roots. In any case, I’m thankful that it won something major.

“Minari” was up for six Oscars, and won, as mentioned, best supporting actress at the 93rd Academy Awards. I recommend watching the movie, and then Yuh-jung Youn’s charming, endearing Oscar speech on YouTube.