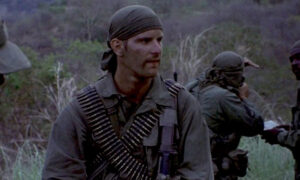 Film Review: ‘Let Him Go’: Should Have Been a Jack Reacher Movie

Neo-Western thriller “Let Him Go” features long-married Montana ranchers George and Margaret Blackledge (Kevin Costner and Diane Lane) in what at first looks to be a delicious movie night for folks of a certain age.

Heck, any age—Lane and Costner not only make a handsome couple, they project a most excellent, well-worn marriage chemistry, where, were it a century or two earlier, George would have lit out for the frontier, and Margaret, in a bonnet, would have said, “I will go with thee, George.”

Needless to say, James’s untimely death weighs heavily on George and Margaret. However, when Lorna moves on and marries the no-good, wife-beating Donnie Weboy (Will Brittain) and then suddenly vanishes, frontierswoman-like Margaret storms off in pursuit, reluctantly driven by George, who, discovering his old (loaded) service revolver already stowed under the driver’s seat, knows he’s got to go along and be the level-headed one.

Off they drive to North Dakota, home of the Weboy clan to reclaim their kin, which starts off as that aforementioned picturesque road-trip. At this point, it’s sort of like “About Schmidt,” where instead of Schmidt (Jack Nicholson) writing letters to his African stepson starting with “Deeeaaaarrr … N’dugu,” Margaret pines for Jimmy.

As they ask questions along the way, the suspense builds, because the Weboys would appear to be precognizant, hyper-aware, and immediately informed of all comings and goings within a 1,000 miles of their barren Gladstone, North Dakota homestead. Everyone they meet appears to be forwarding the info of their whereabouts. It’s mildy creepy. Even the Native lad they share a campfire with, ominously warns them to “Go easy.”

The film kicks into high gear when George and Margaret inevitably find their way to the Weboys Black Hills establishment. It’s a scary Southern-gothic type American family consisting of few big, dangerous, not-too-bright, bad hair-cut-sporting loutish sons, all easily cowed by their psychotic mom. Sort of like if Norman Bates from “Psycho” had big brothers and the dead mom had somehow come to life and was cooking bad porkchops.

Basically what you’ve got here, basically, are warring grandparents in a custody battle featuring a pistol and a hatchet. Short shrift is given to what wee Jimmy’s mom Lorna wants, although to be fair, given that she’s always sporting a new shiner, it’s kind of a moot point.

But I mean, where are the child-care workers and the attorneys settling this legally? Why all the overly dramatic brouhaha with former lawman George who seriously oughta know better? Because then it’s not a neo-Western anymore; it’s a different movie.

Normally nowadays, any movie shot out west featuring horses and craggy-featured actors is a Western, but because it’s 2021 and not 1950, it’s automatically a neo-Western. However, what remains true to the original genre here is that the man makes a major sacrifice for the women and children. The entire time, grumpy George is not a happy camper. He’d rather not go at all.

That all said, it’s still pretty good watchin’. Why? Because it’s got all that good rugged, rustic Americana stuff to look at, wide open vistas and such—good for curing pandemic quarantine cabin fever, if only for a brief spell—and because Costner, Lane, and Manville act up a storm, even though they’re undermined by bad writing and hatchet-silliness.

The only thing that seriously rankles is that this kind of story calls for Costner-heroism, and here our hero is hampered by eye-rolling, predictable, scripted, old-age-ineptness: No! Don’t hold the shotgun resting on the bad guy’s chest, with one hand, while you lean out the bedroom door for at least half a minute and whisper directions!

Personally, I’d have preferred to see “Let Him Go” as a Jack Reacher movie. It’s the perfect setting for 6’5″ former military cop-turned-drifter Reacher to hitchhike through the Badlands, catch wind of Weboy wrong-doing, show up and eat all their porkchops, and then beat the ever-livin’ heck out of all of them with his bare hands. Actually, he would probably hatchet them all into the afterlife and sweep the Dakotas clean of their ilk. I like the thought of that movie a lot.

Still, it’s worth a watch because Costner and Lane make an extremely attractive couple. They sell, splendidly, the now-fading traditional value (and hope that most of us still have) for a long-time spouse who can finish your sentences and know you better than you know yourself. Someone you can sit in silence with all day long and yet go have a first date experience, with none of the long-ago thrills faded. That never gets old.