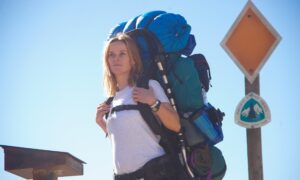 Film Review: ‘Land’: Healing Grief Through Living Off the Land

We built leaf huts, and learned how to build a fire, with bow and hand drills (in a rainstorm), how to stalk and track animals, and how to set figure-4 deadfall traps. Tom Brown, America’s master tracker, further taught various primitive fishing methods, rabbit-stick and atlatl throwing, and edible plant, bark, and mushroom identification. He also taught introduction to Native-American spirituality in the form of sweat lodges and vision quests.

But when Y2K didn’t happen, I relaxed my survival prepping and started focusing on the spiritual stuff instead. But that’s a different story for a different movie.

Robin Wright, best known as Jenny in “Forrest Gump,” Buttercup in “The Princess Bride,” and Sean Penn’s ex-wife, makes her directorial debut with “Land,” directing herself playing Edee Mathis, a woman getting away from it all by retreating to a log cabin in the remote wilderness.

To preface, this is a well-worn genre: the getting-away-from-it-all quest for solitude movie, the grandfather of which is perhaps Robert Redford in “Jeremiah Johnson” and in the more recent “All Is Lost.” There’s also Reese Witherspoon in “Wild” and Emile Hirsch in “Into the Wild.” Those constitute the chosen-solitude variation. There’s also the forced-solitude-by-happenstance variation, like Tom Hanks in “Castaway” and James Franco in “127 Hours.”

Edee packs a few cans of beans, blithely drops her cellphone in the trash, and tells the craggy realtor to come back soon and please drive her car and U-Haul trailer the heck outta here, despite his vehement protestations that one should not be up high in the Wyoming Rockies (the film was shot in Alberta) without a vehicle.

She’s got zero wilderness survival or primitive homesteading skills. She’s clearly thinking, “How hard could it be?” I started cowering inwardly, like at the beginning of a horror movie.

Out of the Frying Pan, Into the Fire

Sure enough, there’s scary animal sounds in the night, food supplies quickly dwindling, the immensely labor-intensive procuring of wood to heat the drafty cabin, and the incident of getting cornered in the rickety outhouse in severe cold, sans pants, by a bad-mood bear. Said bear then sees her cabin door standing wide open and commits major food-foraging mayhem. Edee soon realizes that her plan is not working.

Why did she have this plan in the first place? To numb severe pain: Her Chicago life came to a screeching halt after losing her son and husband. She’s grief-stricken and suicidal, so her sister (Kim Dickens) pleads that Edee not hurt herself. Edee heads for the hills anyway.

Granted, the nonstop foraging, fishing, hunting, trapping, building, prepping, planting, harvesting, repairing, and chop-wood-carry-water involved in living off the land will focus the mind—but if you don’t know what you’re doing, you’re quickly out of the frying pan and into the fire in terms of tribulations.

Suffice it to say, it’s beyond her. Although Robin Wright might have the strong features of an American frontierswoman of old, her character’s a survivalist neophyte, and we endure quite a bit of suffering with her.

Alawa suspects that Edee, who consistently refuses hospital treatment and is vehemently closed-mouthed about her affairs, might be a fugitive from the law. Miguel offers to teach Edee primitive skills if she’s up to it, to which Edee reluctantly agrees, but with the condition that Miguel tell her absolutely no news from the outside world.

There’s an immediate platonic chemistry, and as much as Edee is stubbornly fixated on remaining cut off from everything and everyone, “Land” slowly segues into a two-character piece. She values the wilderness survival lessons, but also, eventually, the camaraderie with its smidgen of warm banter. Like the fact that Miguel hilariously has a completely random and incongruous playlist of FM-lite songs in his head, and knows all the words to Tears for Fears’ “Everybody Wants to Rule the World.”

When Edee is informed that a six-foot-high tree stump is the work of beavers, she asks if there are beavers around that stand that tall on their hind feet. Miguel answers that there’s at least four feet of frozen snow on the ground when the beavers chew these big trees down.

When Edee queries, “Why did you help me?” Miguel responds, “You were in my path.” Miguel has his reasons, and we eventually learn what they are, but all I’ll say about that is—while Edee’s escaping to solitude for comfort initially only brought her more pain, Miguel’s helping her find new life helps him find peace.

“Land” is somewhat similar to the recent “Nomadland” in that both are about women who get away from it all, one on a mountaintop and the other in a van. But whereas “Nomadland” has a bleak, desolate tone, “Land”—by featuring stunning Rocky Mountain landscapes, turquoise rivers, pristine woodlands, and pink-orange sunrises and sunsets—harbors a strong center of hope. This is strengthened by plentiful and soothing birdsong, whistling elk calls, and a soundtrack very similar to the muted string, guitar, and banjo-laden folk band Horse Feathers.

It’s initially a difficult, painful journey. But ultimately Edee reaches the state that Tom Brown Jr. spoke of, which is that you want to get all your hunting, tracking, and survival techniques to be second nature so you can waste little time getting to the good stuff: the spiritual stuff.

Edee gets to the spiritual stuff. Which is letting go of her attachments to the internet, phone, computer; getting to the state of being hyperaware of the healing beauty and peace around her; and finally pinning photos of a painful past in a cabin-wall collage to be celebrated.

Looking forward to seeing more from this newly minted director.