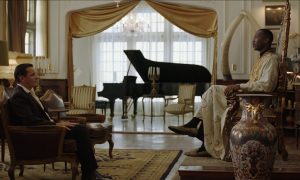 Film Review: ‘Dragged Across Concrete’: Hyperviolent Pie in the Face of Political Correctness

Officer Brett Ridgeman (Mel Gibson) and his new partner, Anthony Lurasetti (Vince Vaughn), constantly have to deal with the cop equivalent of parents not being able to spank their kids anymore. But, as has been made abundantly clear in recent years, cops get rough all the time, regardless, for many reasons. Racism might be one reason, but mostly it’s exasperation, and knowing from experience that violence gets quicker results.

But now smartphones lurk everywhere, and Brett and Anthony are videoed using excessive force on a perp. They get dragged before the boss, who happens to be Brett’s former partner (a top-notch Don Johnson), and they are suspended without pay.

Brett’s furthermore subjected to a lecture about the fact that he’s a perennial door-kicker, never wanted to ride a desk, and now he’s 60. And, how, in his line of work, if one gets “dragged across too much concrete” (the movie’s title), one has to be careful not to lose one’s ability to keep the higher, benevolent scope of law enforcement in perspective. The boss feels Brett’s dangerously close to policing purely on bile.

And indeed, Brett’s too hard-bitten for the lecture to take. While he’s not as cynical as the brutal, self-righteous cop Nick Nolte played in “Q & A,” or the worse cop Richard Gere played in “Internal Affairs,” he’s close.

Brett’s ex-cop wife (Laurie Holden) has MS, and his daughter (Jordyn Ashley Olson) is getting bullied by neighborhood teens to the point where his wife imagines them having to soon talk to a rape counselor. Brett wants to move out of the seedy city of “Bulwark” in the worst way, and now he’s suspended without pay.

One can imagine his thought process: Here I am, risking my life to save the populace from drug dealers. I do my job with one hand tied behind my back, and now I get suspended? Are you kidding me? Well alrighty then. I’m going to get a little payback.

“Payback” is the name of one of the grittiest, pulpy, noir, cop movies ever, which Mel Gibson starred in before his public fall from grace a few years back. While that movie was hip and very funny, “Dragged Across Concrete,” while even more violent, is also more realistic and therefore sadder. But Gibson also hereby reclaims his status as one of our better actors. And “Dragged” is not without humor.

Henry Johns (Tory Kittles) just got released from jail. He’d kind of like to try going straight, but discovers mom is doing bad things to pay the bills, and that’s all it takes to accept an offer from an old crime associate (Michael Jai White) to drive some bank robbers to a bank.

About a third of the way through, however, Jennifer Carpenter (Dexter’s cop sister in the HBO series “Dexter”) plays a mother trying to go back to work at said bank, after taking three months off to have a child. Juilliard-grad Carpenter single-handedly turns the tension up to 10, portraying the anguish of a mother needing to go to work and bring home the bacon, while in the throes of postpartum depression.

Which underscores director Zahler’s rather traditional take on things. He sees women as needing strong men to guard and take care of them. Also, political correctness is thrown like a pie in the audience’s collective face by officers Ridgeman and Lurasetti: “I’m not a racist. I always order a cup of dark roast on MLK day” is the mild side of it.

This is definitely not a movie for feminists and/or liberals; it’s pretty much exclusively for hard-bitten veteran law enforcement personnel living in a time when the friendly, short-sleeves and wingtips-wearing neighborhood policeman of Norman Rockwell’s era has given way to paramilitary outfits and submachine guns. And, of course, the ubiquitous first-responder graveyard humor that always accompanies seeing too much death.

Best scene: On a stakeout in the car, Vaughn loudly munches, masticates, lip-smacks, sighs, swallows, tooth-sucks, paper-crinkles, twist-and-turn-surveys each remaining morsel of a ham-and-cheese sandwich with immense, phlegmatic relish, all the while being balefully, slow-burn glared at by Gibson. Who’s incredulous. Because it goes on forever. Vaughn then blithely offers that the best part of a stakeout is the eating. Gibson replies, “A single red ant could have eaten that faster.”

Casting Mel Gibson (who got thrown out of Hollywood on his ear due to real-life racist remarks) as a racist cop who, like Nick Nolte’s aforementioned dirty cop, pines for the pre-PC days when cops weren’t hamstrung by nice-y-niceness—is a perfect and perfectly cynical showbiz ploy.

Director Zahler has Ridgeman’s ex-cop wife talk about how her former liberal stance has been obliterated by living in a crime-ridden black neighborhood.

At one point, Vaughn’s character says it all went downhill for men when men started saying “we’re pregnant” instead of “she’s pregnant.”

And the story is basically about a black ex-con and two white, probably-soon-to-be ex-cops, involved in a heist that each one hopes will give them an advantage over the bad hand they’ve been dealt in life. How are these lives alike?

Ultimately, “Dragged Across Concrete” challenges today’s PC standards, and then turns around and challenges the audience by making all involved (with the exception of the bank heist crew) more or less understandable and sympathetic.