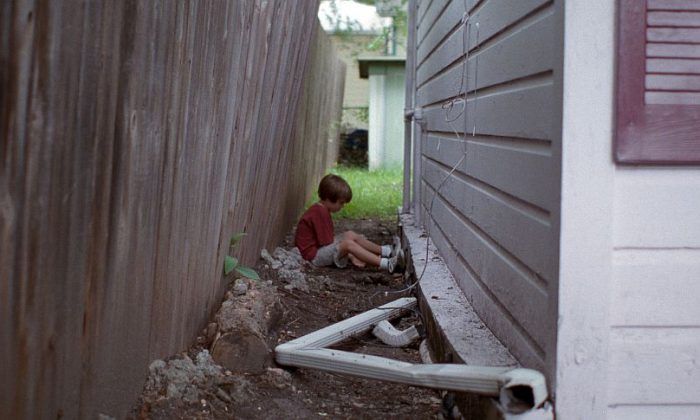 “Boyhood” is to coming-of-age movies what “Act of Valor” is to war movies. The latter used active-duty Navy SEALs to portray SEALs, and “Boyhood” uses an actual boy, filmed over a period of 12 years, coming of age.

Nobody’s done it before. Not like this. Is it interesting? Ever see someone age from 6 to 18 in three hours? It’s a game-changer. Groundbreaking, if not exactly mind-blowing.

For a few days annually, starting in 2002, Linklater shot 10 minutes of film. He cast non-actor Ellar Coltrane as young boy Mason, Ethan Hawke and Patricia Arquette as divorced parents Mason Sr. and Olivia, and his own daughter Lorelei as Mason’s older sister Samantha.

Which American teen-defining category will Mason fall into? His pouty, ever-so-slightly androgynous movie star looks (hints of Peter Dinklage and Justin Bieber in the facial features) open a few categories to him.

His walk is a little awkward as a young boy, so probably he won’t be a natural jock. Is the emerging punky-artsy category the real Ellar? Or is it Mason?

Ultimately what we get to see is a normal life captured in a unique new way. Watching someone age 12 years in three hours is slightly magical. So what does it get us, this, nearly three hours of magical normality?

What becomes quickly clear is that, while a new format and delivery system, this is classic Richard Linklater territory. It’s not so much new as it is bigger.

The film is also related to Linklater’s breakout hit, “Slacker,” as well as his cult hit “Dazed and Confused,” insofar as all three films take place in Texas. And deal with youth, high school, and college-age characters, talking in low-key ways about profound issues, reflecting Linklater’s philosophy major background and seeker’s mind.

What does this 12-year device/artifice, this gimmick—ultimately bequeath us? Could 3, 4, or 12 different well-cast actors show us Mason growing up? Sure. They could tell us the same story.

Watching Ellar grow up on screen is authentic in the sense that real SEALs—not acting but doing—are authentic. It becomes a genre unto itself. Of course, memorizing lines someone else wrote is acting. But what do we stand to gain from this particular brand of aging-authenticity?

We pay homage, in this case, to the director’s (and cast and crew’s) commitment to a new, time-devouring, paradigm-shifting attempt at evolving the art of storytelling.

Be that as it may, “Boyhood” addresses the same issues and questions Linklater’s been asking throughout his body of work, namely, “What’s the point of everything?”

In “Dazed,” a character says, “I’d like to quit thinking of the present, like right now, as some minor, insignificant preamble to something else.” In “Boyhood,” it’s “Life is a preordained slog.”

All Linklater’s films are studies in banality, ringed round and infused with a quiet call to enlightenment. He’s clearly an advocate of learning to live in the moment and cherish the present.

As Hawke expressed it at a July 8 press conference in New York, “It’s an epic about minutiae.” More specifically, as Linklater himself put it at the same press conference, “It was always going to be a portrait of growing up, and bumbling through parenting.”

And yet one senses Linklater’s ongoing awareness of paradox, namely that learning to stand still in the now might actually constitute a journey leading somewhere else. He’s just not sure what road to get on, and which color Goat to drive there in.

Perhaps, now that there’s been a “Boyhood,” next up will be a “Manhood,” and we’ll get to watch Mason’s manhood rite of passage. Maybe in the making of that film, Richard Linklater will find what he’s been looking for.