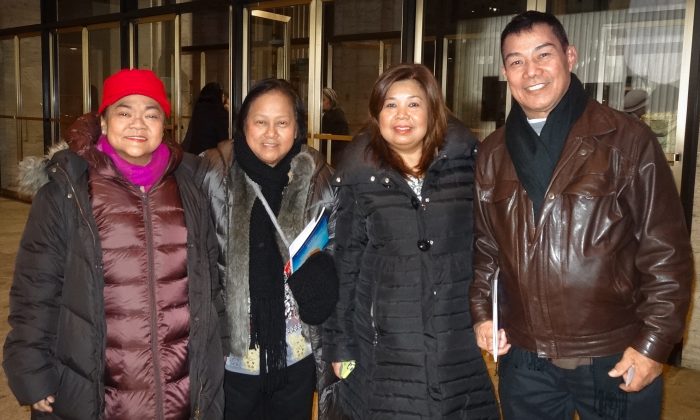 NEW YORK—Lani Misenas, a famed Filipino soprano who once performed for former Philippine President Cory Aquino, got a great Christmas present from her brother and sister-in-law.

So there she was at Lincoln Center on Friday night, part of a full house audience that saw an ancient culture come to life on stage.

“We had so much fun,” she said after the performance, which she attended with a cousin from San Francisco.

Shen Yun Performing Arts, which is based in New York, presents the 5,000 years of Chinese culture through its performances. Classical Chinese dance, along with ethnic and folk dance, are the heart of the performance, but there is so much more. The dancers wear handmade costumes, and are accompanied by a unique orchestra that combines both classical Chinese and Western instruments. And interspersed with sets of dances, award-winning vocalists take the stage.

“She is amazing … She is a classically trained singer and so I identify with her. She is wonderful,” said Ms. Misenas, adding later that she was referring to both singers.

Ms. Misenas had a decades long career that included being part of the Missouri Opera Company.

Shen Yun’s website explains how the singers are set apart from the rest.

“The primary trait that distinguishes the singers of Shen Yun is their use of bel canto technique to sing Chinese text,” it explains. “This means that the singer must, while continuing to meet the challenges inherent in bel canto technique, retain proper Chinese pronunciation and diction. Today, these singers’ ability to do this is unparalleled.”

“It was beautiful,” she said of the performance. “I really, really enjoyed it.”