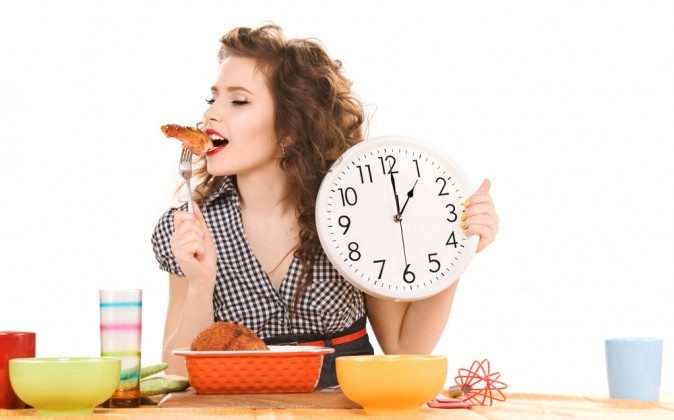 People with faster metabolisms often fare better when eating many smaller meals throughout the day as opposed to following the traditional three-meal regimen. But new research published in the journal Diabetologia suggests that eating just two large meals a day, breakfast and lunch, might be better for Type 2 diabetics as it may help improve weight loss and lower blood glucose and fasting insulin levels.

Researchers from the Diabetes Center in Prague, Czech Republic, looked at the latest science on diets for diabetics and found that, contrary to popular advice, eating a higher number of smaller meals throughout the day may not be as beneficial as previously thought. Based on the data, patients given larger meals just twice daily had less body fat, on average, and were much more likely to have stabilized blood sugar levels.

“We’ve taken the pieces of scientific evidence and put them together,” explained lead author Hana Kahleova to Medscape Medical News. “Mostly it has been recommended for people with Type 2 diabetes to eat five or six small meals a day. But in Western societies at least, it turns out that snacks are not healthy, they are high in sugar and fat. So a regiment of frequent eating hasn’t resulted in better control.”

Larger Meals Better Than Smaller Ones, Even When Calories are the Same

Among the 54 patients she evaluated, all of whom were being treated with oral Type 2 diabetes drugs, 27 were instructed to follow a restricted-calorie diet containing 500 calories less than the recommended daily amount, equaling 1,700 calories per day, dividing between six meals. The other group consumed the same amount of calories and macronutrients, but in only two meals. Both groups completed their assigned regimen over the course of 12 weeks, and then switched to the opposite regimen.

“When patients were eating a large breakfast and lunch but skipping dinner, they lost more weight on average and had less hepatic fat and lower blood glucose, fasting insulin, and fasting glucagon than those who were consuming six smaller meals,” writes Lisa Nainggolan for Medscape.com about the findings of the crossover trial. “The two regimens both contained exactly the same number of calories per day.”

When You Eat May be as Important as What You Eat

Since glucagon levels are not easily affected by diet or even drug interventions, Dr. Kahleova was surprised to see noticeable improvements simply by adjusting the timing of food consumption throughout the day. Based on these findings, she believes a new approach to treating diabetics that addresses specific meal intervals is necessary for proper care.