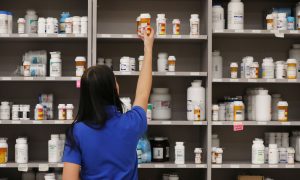 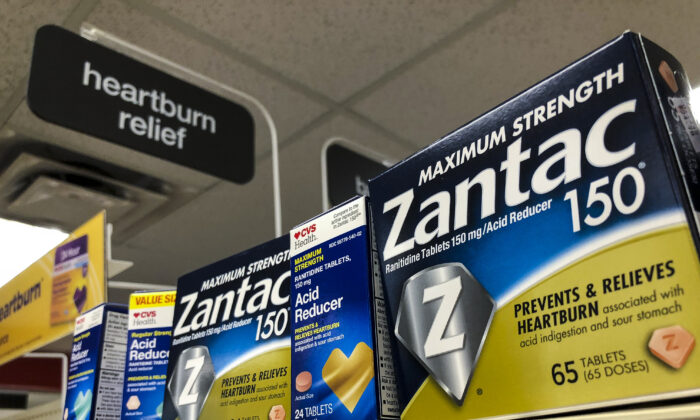 Packages of Zantac, a popular medication which decreases stomach acid production and prevents heartburn, sit on a shelf at a drugstore in New York City on Sept. 19, 2019. (Drew Angerer/Getty Images)
Health News

FDA: All Versions of Heartburn Drug Zantac Should Be Removed From Market Immediately

Zantac, a heartburn drug, should be immediately removed from the market, the Food and Drug Administration (FDA) said on Wednesday.

Manufactures should withdraw all versions of the drug because the agency has determined an impurity, N-nitrosodimethylamine (NDMA), in some of them increases over time, potentially resulting in unacceptable levels of the impurity.

“We didn’t observe unacceptable levels of NDMA in many of the samples that we tested. However, since we don’t know how or for how long the product might have been stored, we decided that it should not be available to consumers and patients unless its quality can be assured,” said Dr. Janet Woods, director of the agency’s Center for Drug Evaluation and Research, in a statement.

“The FDA will continue our efforts to ensure impurities in other drugs do not exceed acceptable limits so that patients can continue taking medicines without concern.”

NDMA is a probable carcinogen, or a substance that could cause cancer. Independent laboratory testing found the impurity in ranitidine, commonly known as Zantac, a finding that came to federal researchers’ attention last year.

Low levels of NDMA are commonly ingested through food and water but sustained higher levels could increase the risk of cancer. Early FDA testing showed low levels of NDMA in ranitidine and recent testing confirmed that the levels of the impurity increase in the drug over time, even under normal storage conditions.

The FDA sent letters to all companies that manufacture Zantac asking they withdraw the products from the market. Consumers who have the drug are being advised to stop taking it. They should throw it away and not buy more.

Other approved over-the-counter products can provide a substitute. People with Zantac subscriptions can talk to their doctor about alternatives before stopping use of Zantac.

“There are multiple drugs approved for the same or similar uses as ranitidine that do not carry the same risks from NDMA. To date, the FDA’s testing has not found NDMA in famotidine (Pepcid), cimetidine (Tagamet), esomeprazole (Nexium), lansoprazole (Prevacid) or omeprazole (Prilosec),” the FDA said in a statement.

Some stores have already suspended sales of Zantac, including Walmart, CVS, and Walgreens.