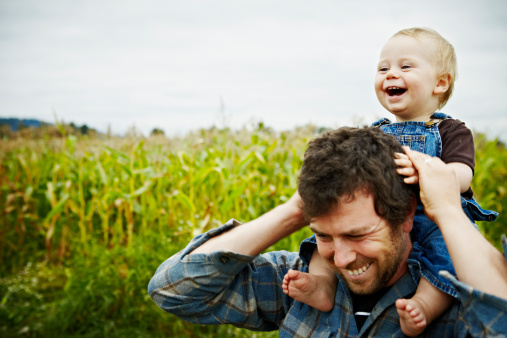 Mothers’ diets get a lot of attention, but a Canadian study suggests that the father’s diet before conception may play an equally important role in the health of their offspring. It also raises concerns about the long-term effects of current Western diets and of food insecurity.

The research led by Sarah Kimmins at McGill University in Montreal, focused on vitamin B9, also called folate, which is found in a range of green leafy vegetables, cereals, fruit, and meats. It is well known that in order to prevent miscarriages and birth defects mothers need to get adequate amounts of folate in their diet.

But the way that a father’s diet can influence the health and development of their offspring has received almost no attention. Now research from the Kimmins group shows for the first time that the father’s folate levels may be just as important to the development and health of their offspring as are those of the mother. Indeed, the study suggests that fathers should pay as much attention to their lifestyle and diet before they set out to conceive a child as mothers do.

“Despite the fact that folic acid is now added to a variety of foods, fathers who are eating high-fat, fast-food diets or who are obese may not be able to use or metabolize folate in the same way as those with adequate levels of the vitamin,” says Kimmins.

“People who live in the Canadian North or in other parts of the world where there is food insecurity may also be particularly at risk for folate deficiency. And we now know that this information will be passed on from the father to the embryo with consequences that may be quite serious.”

“We were very surprised to see that there was an almost 30 percent increase in birth defects in the litters sired by fathers whose levels of folates were insufficient,” said Dr. Romain Lambrot, of McGill’s Dept. of Animal Science, one of the researchers who worked on the study. “We saw some pretty severe skeletal abnormalities that included both cranio-facial and spinal deformities.”

The research from the Kimmins’ group shows that there are regions of the sperm epigenome that are sensitive to life experience and particularly to diet. And that this information is in turn transferred to a so-called epigenomic map that influences development and may also influence metabolism and disease in the offspring in the long term.

The epigenome is like a switch, which is affected by environmental cues, and is involved in many diseases including cancer and diabetes. The epigenome influences the way that genes are turned on or off and hence how heritable information gets passed along.

Although it has been known for some time that there is a massive erasure and re-establishment that takes place in the epigenome as the sperm develops, this study now shows that along with the developmental map, the sperm also carries a memory of the father’s environment and possibly even of his diet and lifestyle choices.

“Our research suggests that fathers need to think about what they put in their mouths, what they smoke, and what they drink—and remember they are caretakers of generations to come,” said Kimmins. “If all goes as we hope, our next step will be to work with collaborators at a fertility clinic so that we can start assessing the links in men between diet, being overweight, and how this information relates to the health of their children.”

The research was funded by the Natural Sciences and Research Council of Canada (NSERC), the Canadian Institute of Health Research (CIHR), Genome Québec, and the Réseau Québécois en reproduction.

From Nature Communications via Newswise