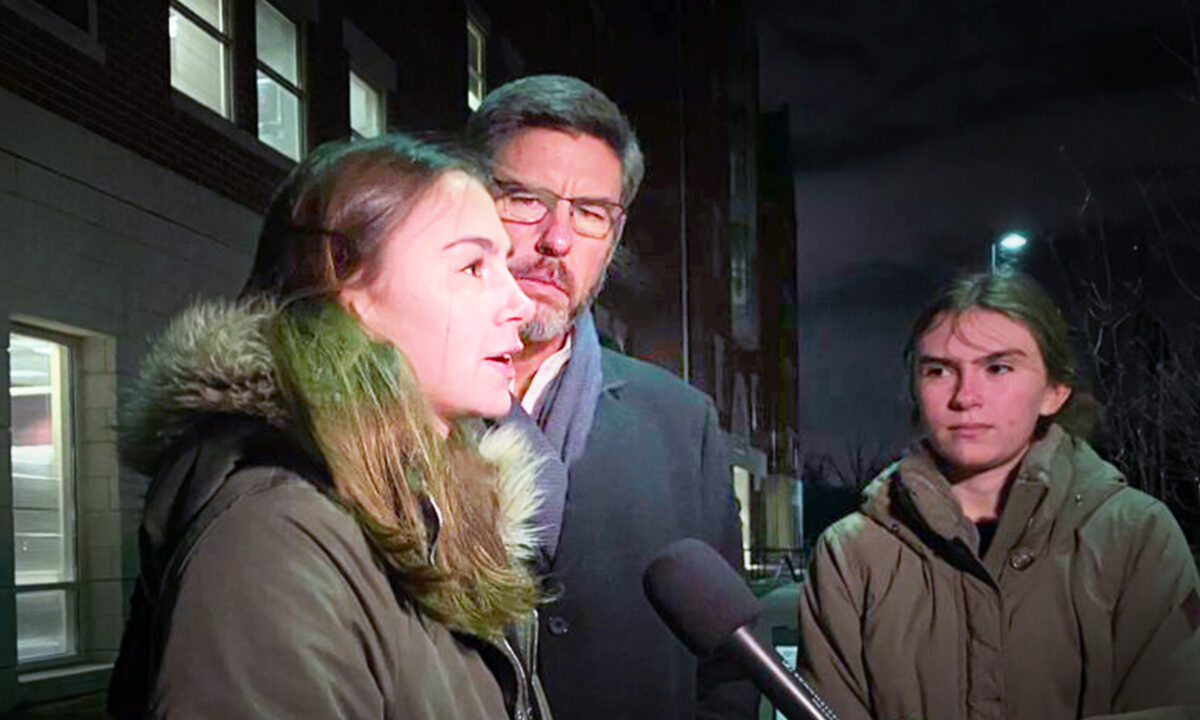 Clint Thomas, his wife, and one of his daughters speak to reporters outside the Loudoun County Public Schools administration building in Ashburn, Va., on Jan. 25, 2022. (Terri Wu/The Epoch Times)
People

Father-of-5 Leads Parents Suing School Board for Asking Students Their Gender Pronouns, ‘About Their Sex Lives’

LCPS was given three weeks to respond. They did not reply, except in “saying that they’re not going to respond,” said the lawsuit’s main plaintiff, Clint Thomas, to The Epoch Times.

On the first day of the school year, two of Thomas’s daughters were forced to declare their gender pronouns publicly in class. All five of his children have gone through LCPS.

The lawsuit takes aim at LCPS’s Policy 8040 and Regulation 8040, which Thomas says “is trying to stifle [parents] from even knowing if the children are expressing different genders in school.”

“There’s just an overarching theme trying to gain information about private matters in our home, survey after survey being issued, inappropriate surveys being issued asking students about their sex lives.”

“It’s all basically about race theory, gender theory. … They’ve been forced to sit through homeroom especially during Pride Month and basically watch videos of people who are trying to change their biological sex.”

The parents accuse LCPS of “knowingly, systematically, and willfully violating the Plaintiffs’ fundamental constitutional rights to care for, nurture, and direct the education, moral instruction, and upbringing of their children.”

Public education should be about academic instruction, said Thomas. Values and moral instruction are for the parents to determine.

For the past year and a half, Loudoun County has been the main battleground for parents and school boards contending over matters of woke content, CRT, mask mandates, sexualized content, and the forcing of young children to use bathrooms and locker rooms with members of the opposite sex.

During COVID lockdowns in 2021, thousands of parents took notice of what their kids were learning in class, said Thomas. Since then, it’s “just been one thing after another,” prompting parents into action.

Parent protests were galvanized in May 2021 by the sexual assault of a female student by a 15-year-old male in a girl’s bathroom in Loudoun County’s Stone Bridge High School.

This was exacerbated when State Prosecutor Buta Biberaj tried to jail parent Scott Smith, the girl’s father, for protesting the bathroom policy that led to her getting raped.

The lawsuit between the parents and LCPS is still in the early stages, the father of five said.

He speculates what aim lies at the heart of the woke education agenda fundamentally.

“The liberal agenda is no longer about providing a level playing field,” said Thomas. “It’s really about tearing down everything traditional. I think that’s the ultimate sinister reality of the equity agenda. It’s not about equality … it’s really tearing down America.”