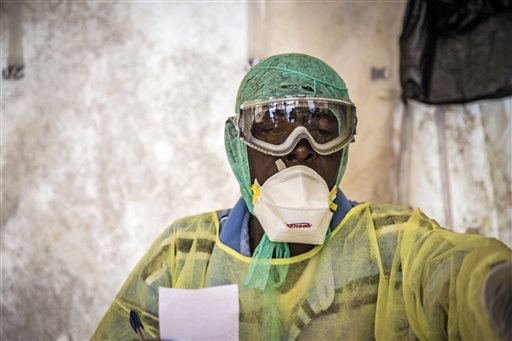 Most agree that if an individual is likely to die and an experimental therapy has a reasonable chance to prevent death, then it should be given.(AP Photo/ Michael Duff)
Ebola

Several therapeutic treatments being developed by other organisations are in experimental phases of testing and show great promise in treating Ebola virus infections in animal models. These include antibodies (one of the body’s natural defence mechanisms to fight infections), RNAi molecules (that target the genetic material of the virus) and several more traditional pharmaceutical drugs.

Before being administered to people, each of these new potential therapies would require human clinical trials, starting with a phase I safety trial. In phase I, the products under investigation are administered to healthy volunteers to evaluate how safe the treatments are, including determining a safe dose range and potential side effects. These trials generally involve 20 to 80 individuals.

Phase II trials, used to determine efficacy, are complicated to carry out for rare viral diseases such as Ebola. Traditionally, in phase II trials two groups are treated, the first group receives the treatment or vaccine while the other group receives a placebo, or mock treatment. Evaluating the efficacy of these compounds will only be possible with direct testing during an outbreak.

But during an outbreak, and for ethical reasons, it may not be possible to administer a placebo to one group of people while treating others with a potentially life-saving therapy.

ZMapp is a mix of three antibodies, all directed to the Ebola virus glycoprotein (GP), which block attachment and entry to cells, the first step of the virus infection cycle.

ZMapp is produced in a Nicotiana plant, related to tobacco, and is being developed as a treatment for Ebola virus infection by Mapp Biopharmaceutical Inc. along with many other partners. These antibodies are “humanised” monoclonal antibodies, stopping the human immune system from recognising them as foreign.

ZMapp was the experimental therapy administered to the two American medical aid workers infected with the Ebola virus. The medics were working in Liberia, trying to contain this outbreak.

This experimental cocktail of antibodies builds on the success of similar antibody therapies, which have protected macaques from a lethal dose of Ebola virus when administered 24 hours after infection. Media reports indicate the two health-care workers have shown signs of improvement.

ZMapp is not the only experimental therapy to show promise in animal studies in preventing lethal disease for Ebola virus. Tekmira Pharmaceuticals Corporation are currently undergoing a phase I clinical trial of TKM-Ebola, a RNAi therapeutic targeted towards Zaire Ebola virus. This therapy was demonstrated to give 100% protection in macaques from an otherwise lethal challenge of Zaire Ebola virus.

In March 2014, the US regulator, the Food and Drug Administration (FDA), fast tracked TKM-Ebola as a drug for an unmet medical need. However, the phase I clinical trial was recently suspended due to safety concerns, with individuals receiving higher doses developing an inflammatory, flu-like response to treatment.

Due to the relative risk from the disease versus the treatment, in the last week, the FDA has eased the restrictions on TKM-Ebola. This may allow for TKM-Ebola to be used in infected patients.

Other drugs, which have been shown in the laboratory to be effective against Ebola viruses include BCX4430 and Favipiravir, both of which are nucleoside analogues that block viral RNA replication.

Developed by BioCryst Pharmaceuticals Inc., BCX4430 is a broad-spectrum antiviral that inhibits different many viruses. BCX4430 has been demonstrated to protect rodents from Ebola virus and macaques from Marburg virus, a closely related virus.

Favipiravir, which is in late-stage clinical development for the treatment of influenza, has reduced the severity of disease and risk of death in a mouse model of disease.

So, should these therapies be used now to treat infected people, bypassing clinical safety trials?

Giving treatments, which are unlicensed and untested in humans, is an ethical issue. Likewise, not administering a potentially life-saving therapy is also problematic. These decisions would have been carefully considered prior to the treatment of the two American aid workers with the unlicensed ZMapp antibody.

In recognition of the difficult ethical issues that arise in this debate, the World Health Organization is meeting to discuss the current outbreak and relevant issues. Much of the debate centres on a popular belief: if an individual is likely to die and an experimental therapy has a reasonable chance to prevent death, then it should be given.

But there are other issues to consider: what if the experimental therapeutic makes the disease worse? And who decides who to treat when only small numbers of doses are available?

Additionally, for many of these experimental therapies, only a small number of doses are currently available to be used for treatment. Many of these therapies would require weeks, if not months, to produce sufficient doses for large scale use.

Although there is currently no end in sight for this outbreak, research and clinical trials of these new therapies for Ebola virus needs to continue. That way, when the next Ebola virus outbreak occurs, there will be licensed options available and the discussion about whether unlicensed drugs should be used will be negated.

Glenn Marsh receives funding from NHMRC. This article was originally published on The Conversation. Read the original article.