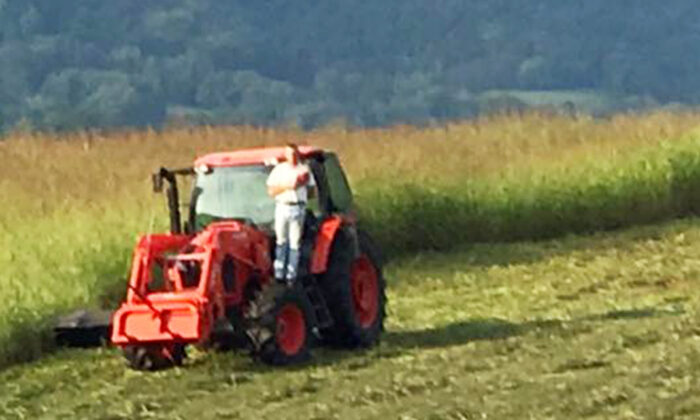 It was a picture-perfect moment—as golden as a Norman Rockwell painting.

Before a high school football game in Virginia, the national anthem was about to play. In a neighboring field, a lone farmer stands patriotically, respectfully, hand over heart.

Local mom Monica Osborne captured the magical scene on camera late August, as her son readied for his debut performance in the school band. The sight gave her chills.

“As I turned to face the flag, hand over heart, the sight of this young man was almost magical, like something you’d only see in a movie or commercial on TV,” Osborne told The Epoch Times.

“I got very emotional to the point of feeling a lump in my throat and tears filling my eyes,” she added. “I knew it was a special moment immediately.”

The farmer had been mowing his hayfield for nearly an hour but shut off the tractor and mower a few minutes before the anthem. “He was already prepared, standing on the tire, hat in hand over his heart,” Osborne said.

As the band started playing, his show of “morals, and respect” suddenly captivated the crowd—to the point where even the announcer called for a round of applause.

Then, he waved his hat, climbed back in his tractor, and continued working—but not before Osborne snapped the perfect picture. It even had the American flag in it.

On returning home, the mom assumed that somebody else would have already posted the scene on Facebook. But no one had. So she posted her own photo, sharing how the farmer’s patriotic act inspired her.

She captioned: “This gentleman was busy mowing the large hayfield, but took the time to stop and stand for our national anthem. True respect…. hard working role model. He was even awarded a round of applause from the crowd following praise from the game announcer. Greatest thing I’ve seen in a long while.

The post went viral, garnering thousands of shares; while her notifications and comments exploded with “praise for the gentleman.”

Through the comments, she soon learned the young man’s name: Alex Couch.

“His younger sister had commented how she was so proud of her brother,” Osborne said. “I have previously transported Alex’s younger siblings on my school bus.”

She said that Alex is a “wonderful role model.”

“Our entire community is proud of Alex,” she added. “We even received praise from the opposing football team fans from the game, which are from North Greene High School in Greenville.”