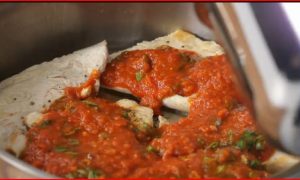 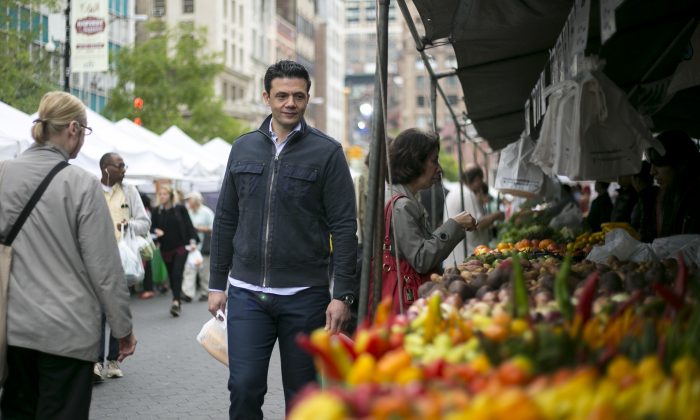 At first, I’m not sure what to make of it. What hazards is he talking about? Jet-lag-inducing daylight saving time? Elections? Finicky weather?

For a minute I forget he’s the executive chef at County, whose American menu is focused on the seasonal, the ephemeral—the now.

He elaborates. It’s about produce, of course.

“You don’t have so many options, but you have so many varieties. Like pumpkin gives you 10 different types, right?” he said.

The farmers market is where he finds his inspiration. He goes there early in the morning, every other day, after his routine nighttime sleep of two or three hours. (And if you’re curious, there is no forthcoming nap later in the day. His caffeine consumption? Just two cups a day.)

Paffenroth Gardens is one of his favorite purveyors. “Almost 99 percent of the time, they’re good. You can always find good stuff for the price you pay for,” he said.

Then, straight from the market, he heads a few blocks north to Gramercy, to County’s kitchen. For a couple of hours every morning, before prep starts, he experiments. It’s his time and his space.

“What I learned from Jean Georges [Vongerichten] is, you don’t have to make it complicated. Let the food speak, let it be simple, clean,” he said. “My dishes, you don’t see more than three or four items. If you’re putting 14, 15 things in a dish, they get lost in each other and you don’t even know what you’re tasting.”

He roasts beets with jewel tones ranging from golden to a deep pink-crimson and sets them on a bed of yogurt. It’s as simple as it gets but it is delicious.

In another dish, he traces a creamy spiral of ricotta cheese and sets ripe fig halves on it, a labyrinth on a plate, with a dash of balsamic vinegar and the garnish of smoked speck bringing out the delicate sweetness of the figs. The yielding texture of the fig with creamy ricotta and goat cheeses is to be savored slowly.

Some vegetables, as Feshan will tell you, need a lot of help, such as cauliflower.

His dish of Romanesco and cauliflower, roasted till fragrantly nutty, is topped with a poached egg, its oozing yolk mixing with the caramelized onions and crushed walnuts.

Carrots for Feshan are versatile. He sometimes turns them into sauces, to accompany fish, for example. Feshan also loves spices, and this fall, he’s created a side dish of roasted carrots containing almost a dozen spices, including coriander and chilies.

He transforms the usually monotonous flavor of the carrots into something much more—something of a playground for all those spices. To offset that complexity, he adds avocado, for a mild creaminess. The dish is finished with toasted seeds: pumpkin, sunflower, and sesame.

Sometimes his love for spices is only apparent in small touches. A simple apple and pear salad, dressed lightly and showered with Parmesan shavings, has pops of heat here and there from spicy walnuts.

Advice for the Home Cook

Home cooking can likewise be simple.

Of course, having the skills helps, but in the end, a lot comes down to tasting. Making mistakes is part of the process.

If you’re starting at the farmers market, pick up produce and smell it. Feshan smells everything at the market. It’s become such a habit he doesn’t even notice.

Vendors sometimes present him with beautiful produce, such as tomatoes so perfect and beautiful they look straight out of photos. “But you cut through and taste it, and it tastes like nothing, like water,” he said.

As we walked the market, he dispensed some home cooking advice about various produce. “Pumpkins are the star of the season,” he said. “Fairytale, butternut squash, acorn, each one is good for something.”

Here are some autumn vegetable tips from Feshan:

Acorn Squash
Roast and purée acorn squash for an excellent filling for ravioli.

Butternut Squash
Its creaminess makes it excellent for soups. Rather than cream, Feshan makes an infusion out of herbs, for example a ginger infusion or a lemon-thyme fragrance for added flavor and fragrance. His butternut squash is no less creamy for it. Many a customer has asked him, “Are you sure there is no cream?” “I’m sure,” he answers.

Spaghetti Squash
Be particularly careful not to hurt yourself when you cut these in half. Take out the seeds, put them in a steamer face down for about 10 minutes. They’re ready when a paring knife goes through cleanly. Use a fork to make “spaghetti strands.”

The perfect pairing, Feshan said, is sautéed garlic and shiitake mushrooms, with a bit of chopped parsley. It’s an excellent side dish for fish like salmon.

Delicata Squash
Cut the squash in rings, toss in oil, chilies, salt, and pepper and roast them in the oven at 350 or 375 degrees for about 20 minutes. You can use tempura batter and deep-fry them.

Carrots
To get the best flavor out of carrots at home, roast them. You can blanch them a little (don’t salt the water) so they cook half way through to help them roast faster. Carrots go well with cumin. Carrots are also very good with garlic, red chili flakes, and a little bit of oil. Just toss them all together on a sheet pan in the oven at 350 degrees for 10–15 minutes.

Cauliflower
“Cauliflower, by itself, doesn’t have flavor. It’s like zucchini. It needs a lot of help,” Feshan said. The solution? Roast it to bring out its nutty flavor.