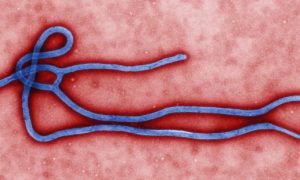 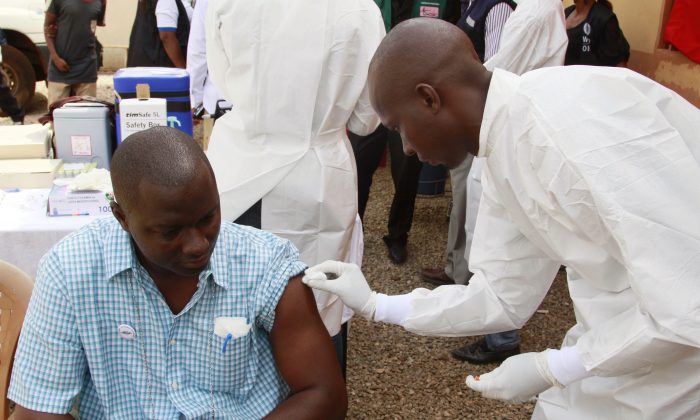 In this March 7, 2015 file photo, a health worker, right, cleans a man's arm before injecting him with a Ebola vaccine in Conakry, Guinea. (AP Photo/ Youssouf Bah)
Africa

LONDON — An experimental Ebola vaccine tested on thousands of people in Guinea seems to work and might help shut down the waning epidemic in West Africa, according to interim results from a study published Friday.

There is currently no licensed treatment or vaccine for Ebola, which has so far killed more than 11,000 people in West Africa since the world’s biggest outbreak began in the forest region of Guinea last year. Cases have dropped dramatically in recent months in the other two hard-hit countries, Sierra Leone and Liberia.

“If proven effective, this is going to be a game-changer,” said Dr. Margaret Chan, Director-General of the World Health Organization, which sponsored the study. “It will change the management of the current outbreak and future outbreaks.”

Scientists have struggled for years to develop Ebola treatments and vaccines but have faced numerous hurdles, including the sporadic nature of outbreaks and funding shortages. Many past attempts have failed, including a recently abandoned drug being tested in West Africa by Tekmira Pharmaceuticals.

The study involved several thousand people who had been near a new Ebola patient or a close contact of one. They were randomly assigned to get the vaccine right away or in three weeks.

Researchers started tracking results 10 days after they set up the groups to give time to weed out any people who might have been silently harboring the virus when the study began.

Using a tool like this vaccine, we would be able to stop the epidemic from going really wild and spreading further.
— Marie-Paule Kieny, WHO vaccines expert

The vaccine, developed by the Canadian government, has since been licensed to Merck & Co. but has not yet been approved by regulators. The study results were published online Friday in the journal Lancet.

At the moment, officials think the vaccine would only be used once an outbreak starts, to protect those at high-risk; there are no plans to introduce mass vaccination campaigns like those for measles or polio or to create huge stockpiles of the shots.

Merck, based in Kenilworth, New Jersey, noted its vaccine is in what is normally the final round of human testing in Sierra Leone, and in mid-stage testing in Liberia.

Merck will manufacture the vaccine if it’s approved for use outside patient studies. In late-morning trading in the U.S., Merck shares were up 62 cents, or 1.1 percent, at $59.13.

Last December, Gavi, the vaccine alliance, said it would spend up to $300 million buying approved Ebola vaccines. The private-public partnership, which often buys immunizations for poor countries, said Friday that it “stands ready to support the implementation of a WHO-recommended Ebola vaccine.”

An expert group monitoring the study’s data and safety recommended the trial be stopped on July 26 so that everyone exposed to Ebola in Guinea could be immunized.

The vaccine uses an Ebola protein to prompt the body’s immune system to attack the virus.

Ebola Outbreak: Where We Are Now and What Happens Next

“It looks to be about as safe as a flu vaccine,” said Ben Neuman, a virologist at the University of Reading who was not part of the trial. Researchers are still assessing possible side effects; the most serious seemed to be fever and the stress experienced by patients who believe such symptoms were due to Ebola.

“This (vaccine) could be the key that we’ve been missing to end the outbreak,” Neuman said. “I don’t see any reason on humanitarian grounds why it should not be used immediately.” He said further tests would be necessary to see if the vaccine might also protect pregnant women, children and adolescents; those trials are already under way. It’s also uncertain how long protection might last.

WHO vaccines expert Marie-Paule Kieny said having an effective vaccine might avert future disasters but added it would still take months to get the shot approved by regulators.

“Using a tool like this vaccine, we would be able to stop the epidemic from going really wild and spreading further,” she told reporters, noting that stamping out future outbreaks still depends on early detection. WHO first identified Ebola in Guinea last March but did not declare the epidemic to be a global emergency until August, when the virus had killed nearly 1,000 people.

Other Ebola vaccines are being studied elsewhere but the declining caseload is complicating efforts to finish the trials.