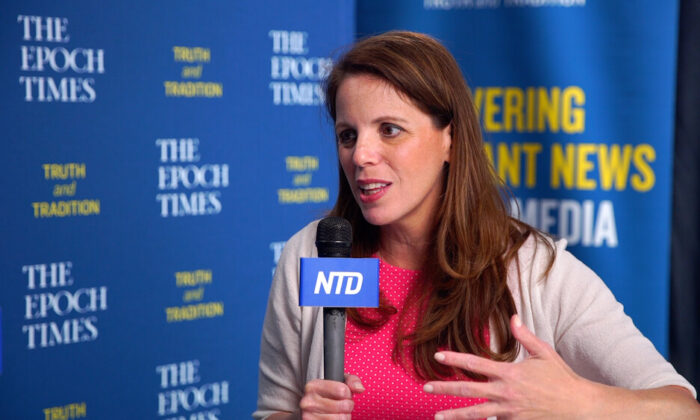 EXCLUSIVE: Solitary Confinement Was ‘One of the Most Horrible Experiences’ for Dr. Simone Gold: AFLDS Founder

Being put in solitary confinement was one of Dr. Simone Gold’s “most horrible experiences of her life,” according to the chairman of the board for America’s Frontline Doctors (AFLDS), the organization that Gold founded.

“I mean, unfortunately, she had to spend about eight days in the SHU, which is also known as solitary confinement because she’s unvaccinated,” Joey Gilbert said. “So that was, as she says, one of the most horrible experiences of her life.”

Gold surrendered herself to the Federal Detention Center in Miami (FDC Miami) on July 26, where she was put in solitary confinement for eight days, as part of the prison’s COVID-19 infection prevention protocol for not being fully vaccinated, classified as having received two doses of the COVID-19 injection.

“Not fully vaccinated inmates need to complete a 10-day quarantine as new intakes or if they have a known or suspected exposure to a case of SARS-CoV-2,” the Federal Bureau of Prison that manages federal prisons said on its website.

Gold, in an Aug. 12 email from prison, said that solitary confinement was a “punishing and inhumane experience.”

“Using the excuse of COVID-19, all incoming female inmates are put into a punishment isolation cell under the guise of a ‘quarantine.’ They told me it wasn’t for punishment, but it was certainly a punishing and inhumane experience,” Gold wrote. “Apparently, men are not subjected to this treatment.”

Gilbert claims that if the federal detention center had opened up another unit for its female detainees, Gold and other female inmates would not have been put in solitary confinement during their quarantine.

“They don’t separate the men like this,” Gilbert said. “They could open up another unit but they don’t want to, and you know, it’s all cost-based.”

“The women in this prison are not being treated the same as the men for sure.”

Spokesperson Benjamin O’Cone from the Bureau of Prisons, in a reply to The Epoch Times, said the federal agency can’t comment or provide information on inmates’ “conditions of confinement or medical care” due to privacy, safety, and security reasons but claimed that all inmates are treated equally.

“All institutions have areas set aside for quarantine and medical isolation,” O’Cone wrote. “All inmates are managed per CDC guidelines and treated equally regardless of gender.”

“Concerning your inquiry on ‘solitary confinement,’ the BOP [Bureau of Prisons] does not house inmates in solitary confinement. Rather, the BOP operates under the guiding principle that inmates should be housed in the least restrictive setting necessary to ensure their own safety, as well as the safety of staff, other inmates, and the public; and they should only remain there for as long as necessary to address the specific reason(s) for placement. It is the practice of the BOP to use restrictive housing only as necessary,” he added.

As of Aug. 23, Gold is 28 days into her 60-day prison term for entering the U.S. Capitol on Jan. 6. She pleaded guilty in March 2022 to the misdemeanor charge of trespassing the restricted building. On June 16, she was sentenced to serve 60 days in jail, one year of supervised release, a $500 restitution, and pay a $9,500 fine.

Gilbert says that overall, Gold is “staying you know very, very positive” and keeping busy with writing her second book, reading, and her work with AFLDS.

“So she really is staying in the fight more than anything. She’s right on the same place she was when she went in … On the fight for medical freedom, medical privacy, [and] parental rights, we talk about that every time we speak, every email,” Gilbert said. “She is a woman of her word and she’s not backing off an ounce on the stuff that we’ve been fighting for since really March 2020.”

He also said that the letters, postcards, and well wishes that Gold’s been receiving in prison have helped her tremendously get through some days.

“I would just say that, please don’t assume or think your card or postcard or words of well wishing are not important. They are so important to her,” Gilbert said, adding that “some days, it’s the only thing getting her through.”

Since entering prison, the Medical Board of California has placed Gold’s medical license on inactive status, which will continue throughout the duration of her sentence.

“The license of Dr. Gold was automatically placed in ‘inactive’ status pursuant to Business and Professions Code 2236.2, which states ‘a physician and surgeon’s certificate shall be automatically placed on inactive status during any period of time that the holder of the certificate is incarcerated after conviction of a misdemeanor,’” Carlos Villatoro, public information manager for the Medical Board of California, told The Epoch Times in an email. “The law further explains that license shall be returned by the Board to its appropriate status within five business days of receiving notice that the physician and surgeon is no longer incarcerated.”

“I should note that the automatic change in the license from active to inactive is not considered discipline,” he added.

Gold is also licensed to practice in Florida where she has an active status.

Correction: A previous version of this story had the wrong month Dr. Gold surrendered herself to prison. The Epoch Times regrets the error.