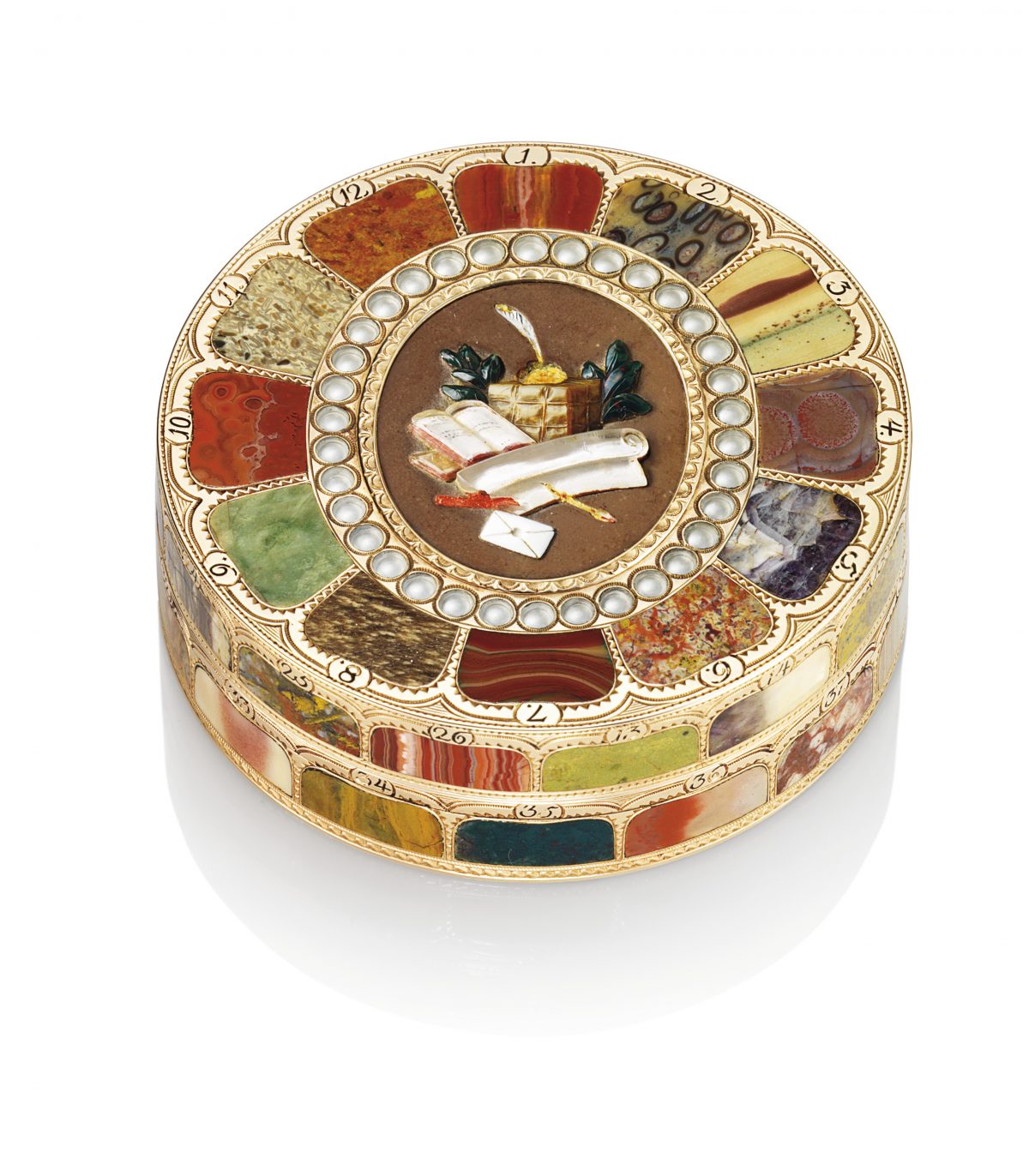 Take in a tour of the world through the art of the ages, piece by exquisite piece, starting with herculean sculptures for the Sun King and ending with the smallest of golden boxes for the average aristocrat. Christie’s “Classic Week,” through July 12 at Christie’s London, showcases the sale of the most extraordinary fine and decorative art in the world. It’s a chance to take a sneak peak at art we will perhaps never see again, if the works are bought by private owners.

Two Powerful Pieces From the Court of a King

From the court of the Sun King, Louis XIV of France, two significant sculptures come to the market for the first time: “Louis XIV on Horseback,” by François Girardon and “Hercules Overcoming Acheloüs” by Ferdinando Tacca.

“Not since the record-breaking sale [$27,885,000] of the bronze figure by Adriaen de Vries [in 2014] have works of this extraordinary caliber and rarity come to the market,” said Donald Johnston, the international head of European sculpture at Christie’s, in a press release.

King Louis XIV’s sculptor François Girardon’s rediscovered masterpiece “Louis XIV on Horseback,” is a sculpture that was thought to be lost from the artist’s own collection. Yet, as it was depicted in the famous engraving “Galerie de Girardon,” it was known to have existed.

The sculpture shows the Sun King in full power at the height of his reign, sitting high on his horse, one hand raised and the other holding a baton, exerting his strength both in his stance and on his stallion as he pulls heavily on the reins.

It is the only reduction of this original monument privately owned and not in European royal hands. The full-scale monument was commissioned for the Sun King’s newly built Place Louis le Grand (now Place Vendôme) to immortalize his majesty, power, and absolute authority. The original statue was destroyed in the French Revolution.

The sculpture shows the allegorical battle of Hercules overcoming the god Acheloüs, who here appears as a bull. The fierce force of the fight can be felt through Tacca’s skillful and dynamic composition.

In 1681, the sculpture was gifted to the Grand Dauphin by his father, King Louis XIV. The piece remained in the French Royal Collection until the French Revolution.

Estimated at around $6.6 million.

A Painting of a Child Lost and Found: Rubens’s ‘Portrait of Clara Serena’

A rare glimpse into Sir Peter Paul Rubens’s intimate life comes up for sale in the portrait of his daughter Clara Serena, who died early, at the age of 12. This portrait is of special significance as it was very nearly lost as a Rubens.

Until 1947, the painting was attributed to Rubens. In 1960, The Metropolitan Museum of Art in New York was gifted the piece, but since it was attributed to a follower of Rubens rather than to the master himself, it was sold in 2013 into private hands for some 30 times the lower estimate of $20,000.

The new and present owner sent the painting for extensive restoration work, and after the removal of a layer of green paint that had caused the painting to be hard to analyze, it was re-attributed as an authentic, autographed Rubens.

Rembrandt van Rijn’s “Christ Presented to the People” (“Ecce Homo”) is considered to be among his most significant achievements in any medium, and an exemplar of the Western printmaking tradition. It is one of eight known impressions from his acclaimed first state of this print. A first state of print refers to an impression taken of the first design on the plate; subsequent states are therefore reworkings of the original design or first state. This is the last known copy in private ownership.

Rembrandt was considered a master printmaker and made 300 prints, ranging from miniature portraits to complex compositions containing many figures. Along with his “The Three Crosses,” this is the largest of Rembrandt’s prints.

Rembrandt created “Ecce Homo” at the height of his printmaking in the 1650s. It’s executed in drypoint, where a needle-like implement is used to draw a design on a copper plate. “Ecce Homo” is printed on what would’ve been at the time an expensive piece of Japan paper. Rembrandt experimented with many exotic papers.

“Rembrandt essentially executed a huge drawing on copper, while making full use of the rich, inky effects, intense contrasts, and graphic clarity that can only be achieved in print,” said Tim Schmelcher, international specialist in prints and multiples at Christie’s.

In Rembrandt’s composition, the drama is played out: This is the moment when Jesus is judged. What’s interesting to note is Rembrandt’s portrayal of the people in the crowd, with some wearing clothes of his time. Perhaps he was pulling his contemporaries into the unfolding drama or even commenting on the state of his time.

Estimated from $3 million to $5 million

Virtuoso Art Abounds in the Blooms of ‘Les Liliacées’ by Redouté

A first edition of Pierre-Joseph Redouté’s “Les Liliacées” (“Liliacaea,” the lily family), bound in a sumptuous red Morocco gilt binding, is one of the most opulent and spectacular botanical books ever published. “Les Liliacées,” along with Redouté’s contributions to Étienne Pierre Ventenat’s “Le Jardin de la Malmaison,” was deemed “the highest peak of artistic and botanical achievement” in “A Catalogue of Redoutéana,” exhibited at the Hunt Botanical Library, in Pittsburgh in 1963.

The eight volumes of “Les Liliacees” contain not only lilies but also flowers outside the lily family, such as irises, orchids, heliconias, agaves, amaryllis, and bromeliads, including pineapple and banana.

The time-consuming technique that Redouté employed to depict the flowers required adding all the colors of ink at once to a stipple-engraved plate, allowing delicate soft tones, and the flowing plant contours to emerge from the impressions. But it also required that each new print be re-inked. It was a technique that hadn’t been applied to botanical art before.

This edition of Redouté’s classic was made for the Duchesse de Berry, a student of Redouté’s and an ardent supporter of his work. She collected many of his works, including 170 of his original drawings for his famous “Les Rose.”

The Duchesse de Berry had formed a library of fine drawings, paintings, and books with the best of bindings and materials, but she sold the “Liliacées” volumes and other fine books in England in 1831, possibly to raise funds while exiled from France with her father-in-law, Charles X.

Previously unrecorded, and never before seen in public, is a circa 1785 Saxon hardstone and gold bonbonnière by Johann Christian Neuber. Neuber became a master of the goldsmith’s guild in Dresden in 1762, and in 1769 became the director of the Green Vault in Dresden Castle, one of the largest collections of treasure in Europe.

Neuber designed a few gold boxes in which stones were individually numbered and set using a technique called “Zellenmosaic,” whereby mineral stones form a mosaic pattern between stripes of gold; the process is similar to creating cloisonné enamel.

In 1775, Neuber was appointed Hofjuwelier, or court jeweler, to Frederich Augustus III. The “steinkabinettabatiere” or snuffbox was created as a response to European aristocracy’s interest in geology. The boxes were mini-geological collections and were often accompanied by a catalog, with entries numbered to match and detail the stones. Neuber said he had created a small portable masterpiece merging “luxury, taste, and science.”