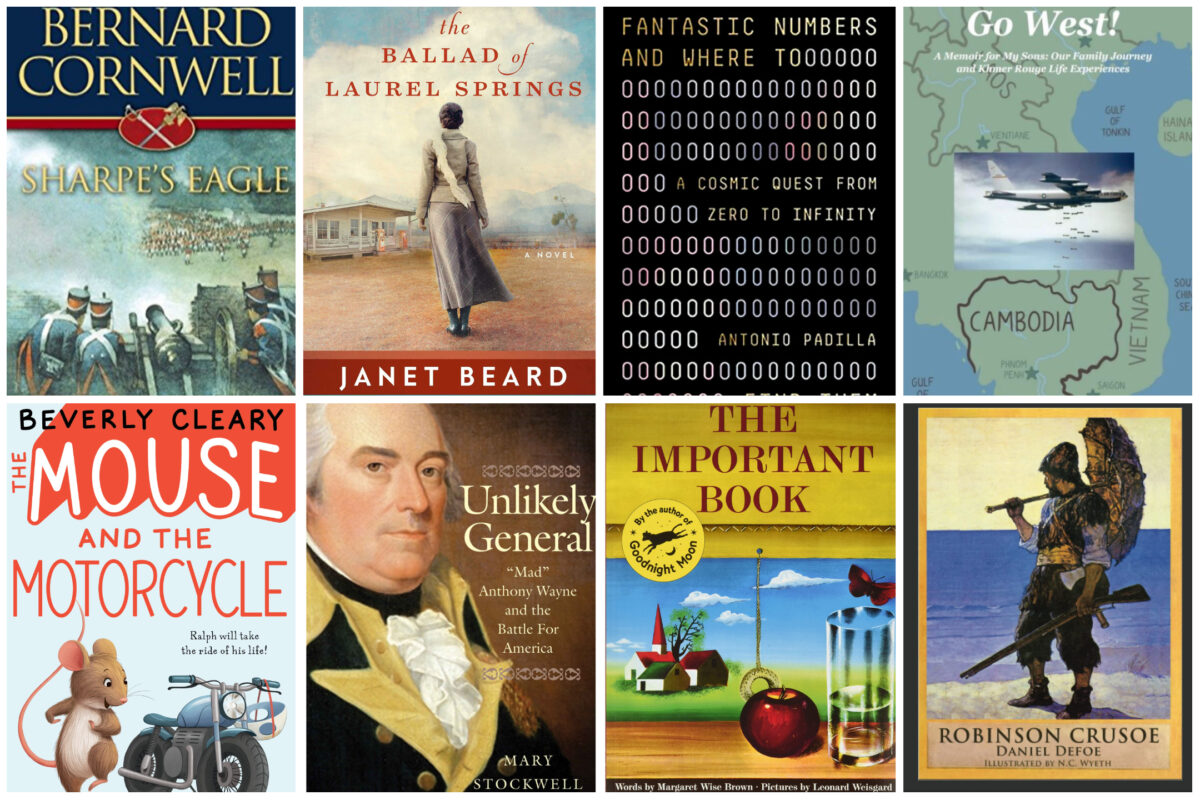 This week, we feature a memoir from a survivor of the Khmer Rouge and a compelling biography of an unlikely hero of the American Revolution.

This is the first in the Sharpe’s Series by Bernard Cornwell. The novel follows the adventures of Richard Sharpe of the South Essex Regiment during the Talavera Campaign in 1809, as he attempts to restore his regiment’s honor by securing a French Imperial Eagle.

‘The Ballad of Laurel Springs’
By Janet Beard

As she did with her bestseller “The Atomic City Girls,” Janet Beard sets her tale in Eastern Tennessee, but with a focus here on Appalachian ballads. Some of these ballads feature lovers’ quarrels and even murders. Grace, a fifth-grader, begins investigating her family’s history as part of a school project, and with that introduction, readers encounter the secrets and passions of the women in this clan, what all they’ve suffered, and how each generation has been influenced by the ballads they hear.

‘Unlikely General: ‘Mad’ Anthony Wayne and the Battle for America’
By Mary Stockwell

They called him “Mad” Anthony Wayne. A flawed, often-despised man, Wayne rose above his weaknesses to save the United States. This book tells of Wayne’s greatest achievement: his 1794 victory at the Battle of Fallen Timbers. That victory permitted the United States to grow into a nation that spanned the North American continent. We discover how Wayne built the army that defeated the Native Americans, despite inadequate supplies, scant troops, and a second in command who actively undermined him.

Too Large (and Small) to Count

‘Fantastic Numbers and Where to Find Them: A Cosmic Quest from Zero to Infinity’
By Antonio Padilla

About more than numbers, this book outlines the relationship between numbers and physics—how the world works at the largest and the smallest scales. Padilla’s numbers are fantastic in two ways: They challenge belief and they’re so extravagant as to seem fancy. They define how the universe works. There’s math involved, yet it’s entertaining, informative, and worth reading, even if math frightens you. It has a high “wow” factor.

From Cambodia to Freedom

‘Go West! A Memoir for My Sons: Our Family Journey and Khmer Rouge Life Experiences’
By Sideth D. Niev

Under communist Khmer Rouge rule in the mid-1970s, lives in Cambodia drastically changed. Tragically, millions died. Triumphantly, thousands lived to see a new beginning in a new land. This is the story of one family who survived the darkest of days. The author wrote this heartfelt memoir and its hopeful message for his sons.

When All Appears Lost

Based on reports from a real-life castaway, this 300-year-old story of a shipwrecked survivor is one of the first English novels and one of the most published and popular tales in the world. Defoe depicts in detail Crusoe’s efforts to unload the battered vessel before it sinks and the cunning and logic that he employs to carve out a life on the deserted island. Critic Charles Van Doren described this adventure as “one of the treasures of mankind.” This edition contains N.C. Wyeth’s illustrations from an earlier version.

The Magic of the Ordinary

In this sweet book, the author of “Goodnight Moon” invites preschoolers to take a closer look at objects such as rain, daisies, apples, and spoons. A tender explanation of everyday things, beautifully illustrated by Leonard Weisgard.

The Ride of His Life

‘The Mouse and the Motorcycle’
By Beverly Cleary

A hotel mouse discovers a young guest’s toy motorcycle and heads off on an unforgettable adventure. Published in 1965, it’s the first of the Ralph trilogy. This fun tale is perfect entertainment for readers gaining independence.