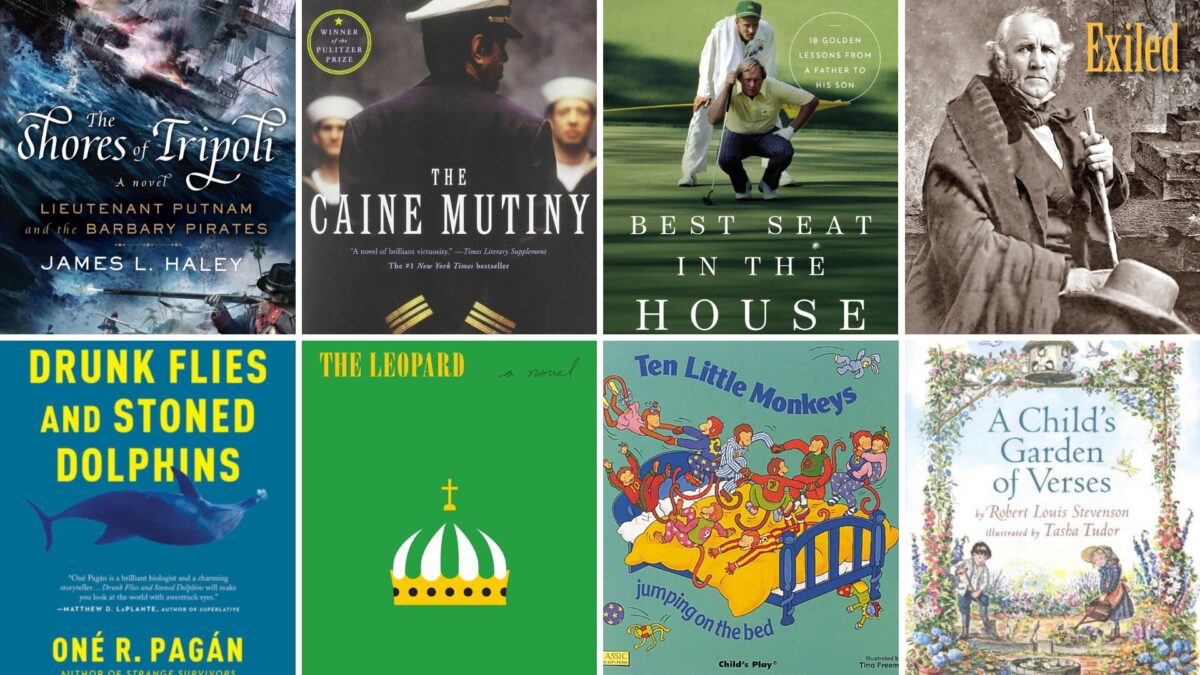 This week’s selection features a potent biography on Sam Houston’s late career and a perfect Father’s Day gift—life lessons from a golf champion.

‘Shores of Tripoli: Lieutenant Putnam and the Barbary Pirates’
By James L. Haley

Packed with naval battles and marine heroism, this work of historical fiction is the first of the “Bliven Putnam Naval Adventure Series.” Set against the ongoing threat of the Barbary pirates and full of history, it recreates the earliest years of the U.S. Navy.

The Moral Complications of Command and Obedience

‘The Caine Mutiny: A Novel’
By Herman Wouk

It’s World War II in the Pacific, and some officers and crew of the minesweeper U.S.S. Caine are convinced that their commander isn’t only incompetent, but also possibly mentally ill. When a typhoon forces them to act, they relieve by-the-book Capt. Queeg of duty. They survive the storm, but now face charges of mutiny. The climax of this modern classic comes during the court martial and its aftermath. Wouk’s study of leadership and the limits of obedience remain as pertinent today as when it was written.

The Weird World of Intoxicated Animals

‘Drunk Flies and Stoned Dolphins: A Trip through the World of Animal Intoxication’
By Oné R. Pagán

Only humans get drunk and stoned on drugs; animals know better, right? Not true. Not only do animals use drugs and alcohol, but many animals seek them out. The author shows how chemistry, zoology, and botany work and how they all come together. Pagán tells this story with humor and language accessible to those who made it through remedial science classes with a gentleman’s “C.” Even if you hated science in school, odds are you’ll love this informative, entertaining, and witty book.

‘Exiled: The Last Days of Sam Houston’
By Ron Rozelle

Most biographers concentrate on Houston’s early career, but Rozelle takes a different tack. He presents the end of Houston’s public life, as Texas’s first U.S. senator and governor of the new state of Texas. Rozelle depicts Houston as a complex, three-dimensional, yet very human character—a giant despite great flaws. This portrait is of a man standing athwart history, as the tides of public opinion turn against him.

Lessons from the Golden Bear

‘Best Seat in the House: 18 Golden Lessons from a Father to His Son’
By Jack Nicklaus II and Don Yaeger

As a youngster, Jack Nicklaus II followed his father on many golf courses. At 14, he was asked to caddie and took on the role. To honor his father, a record-holding PGA golf champion, businessman, and philanthropist, he shares 18 valuable life lessons inherited from a rich legacy that extends beyond the greens.

‘The Leopard’
By Giuseppe di Lampedusa

The 19th-century forces of democracy and political change are sweeping aside Sicily’s ancient aristocracy. Regarded by many as one of the world’s great historical novels, “The Leopard” follows the decaying status and fortunes of Don Fabrizio Corbèra, an aristocrat caught between the revolutionary forces of his time and his devotion to tradition and the Church. Some of the book’s themes include human frailty and the hold of the past on the present. The book begins slowly, but read on. Many readers have found riches in these pages.

‘A Child’s Garden of Verses’
By Robert Louis Stevenson

With Stevenson’s poems and illustrations by Tasha Tudor, this slim volume evokes the magic of childhood. “The world is so full of a number of things, I’m sure we should all be as happy as kings.” Perfect for the littles at bedtime.

And the Doctor Said …

‘Ten Little Monkeys Jumping on the Bed’
By Tina Freeman

This recognizable rhyme inspires counting, recitation, and lots of giggles as, one by one, despite Mother’s and Doctor’s orders, monkeys fall, heads bump, and 10 monkeys learn the perils of jumping on the bed. This is a fun child’s read.