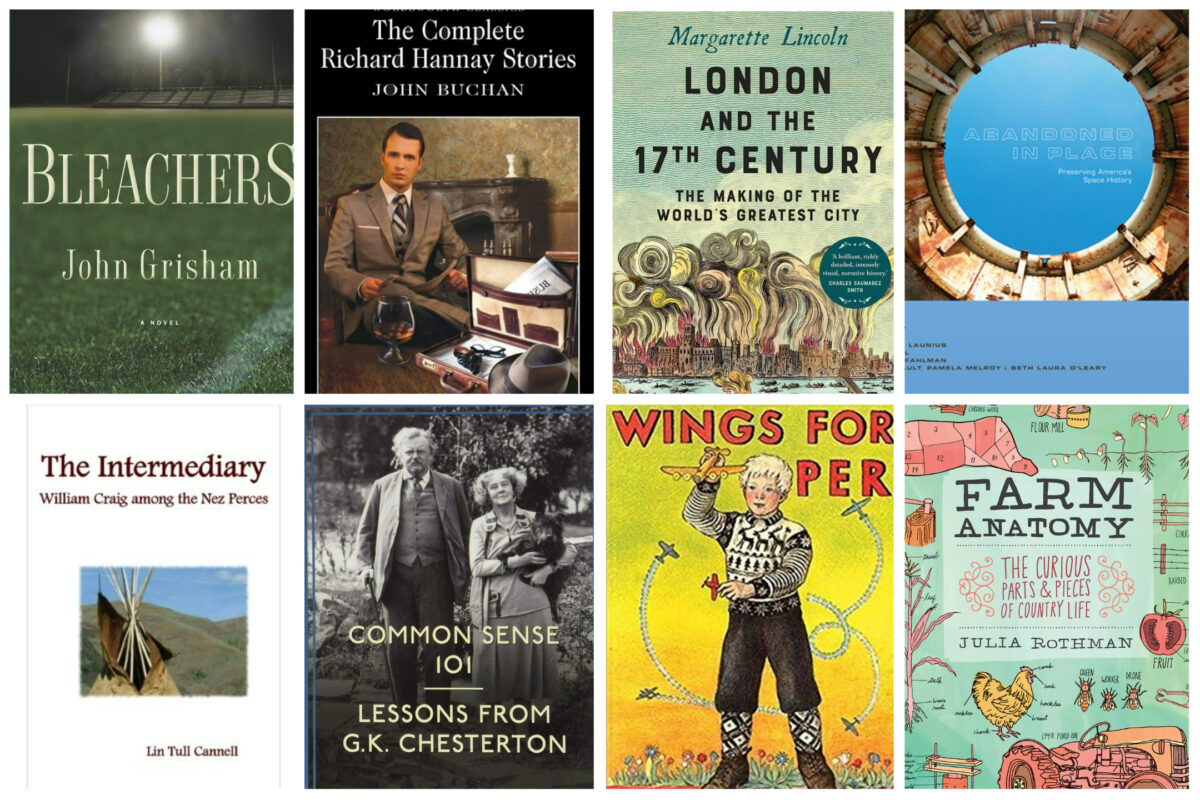 This week, we look at a lively overview of England’s formative years and their impact, and a biography of a U.S. frontiersman and peacemaker.

This is a different book than what we might expect from the law-drama king. Grisham takes readers on a walk down memory lane to a former high school football team gathered to bury the football coach who deeply impacted them. This book is a tribute to high school football.

The Grandfather of Spy Thrillers

In these five novels of adventure and suspense, British secret agent Richard Hannay takes center stage. Some readers may be familiar with “The Thirty-Nine Steps,” in part because of the Alfred Hitchcock film. But here are other stories that lend depth to Hannay and launch readers into a world of fast-paced suspense not unlike our own. In “Greenmantle,” for instance, the spy works to thwart a jihad plot in the East. Critic Roger Kimball describes reading Buchan as “a tonic exercise.” This book is for teens as well as adults.

London During Its Rise to Greatness

‘London and the 17th Century: The Making of the World’s Greatest City’
By Margarette Lincoln

Lincoln examines London’s formative years: between Queen Elizabeth I’s death and King William III’s reign. It was a consequential period. London’s population was 200,000 in 1600, nearly tripling to 570,000 by 1700. We read about the Gunpowder Plot, the English Civil War, the Great Plague and Great Fire, the Restoration, the Dutch Wars, and the Glorious Revolution of 1688. Entertaining and informative, it leaves readers appreciating 17th-century London’s contributions made to today’s world.

Miller has created a thoughtful photo essay of U.S. space-flight heritage. Intrigued by the space race since childhood, he began photographing abandoned launch facilities decades ago. The images reveal some of space exploration’s most historic sites following closure. Between the photographs of secure military or NASA facilities, most no longer existing, are essays by space-travel notables, including three Ray Bradbury poems.

More Than a Mountain Man

‘The Intermediary: William Craig Among the Nez’
By Lin Tull Cannell

William Craig was young when he fled Virginia and headed West in the early 1800s. He wore many hats: fur trapper, trader, interpreter, farmer, husband, father, guide, and explorer. Most significantly, he served as the official liaison between the Nez Perce and the wave of newcomers to Native American lands. This is his story.

Is this book a classic? No. Are some of Chesterton’s better-known works—”Orthodoxy,” for instance, or the Father Brown stories—classics? Possibly. Are his aphorisms? Absolutely. Chesterton remains one of the most quoted authors of our age. “If a thing is worth doing, it is worth doing badly” is only one of his many adages that regularly see print. Here Ahlquist, a leading Chesterton scholar of our day, provides an excellent introduction to the classic wit, goodness, and wisdom of this man who “wrote about everything.”

‘Wings for Per: Real-Life Story of Norwegian Pilot During World War II’
By Ingri and Edgar d’Aulaire

Readers follow the exploits of Ingri d’Aulaire’s nephew, a Norwegian boy who wants to fly, makes his way to the United States, and returns to Europe as a pilot to fight the Nazis. This book includes vivid illustrations and historical background and is for those aged 8 to 12.

A Study Through Illustration

‘Farm Anatomy: The Curious Parts and Pieces of Country Life’
By Julia Rothman

Julia Rothman invites readers to delight in the varied facets of farm life through her drawings, diagrams, recipes, and instructions. The first of her engaging and informative “Anatomy” series is worth discovering in its entirety.