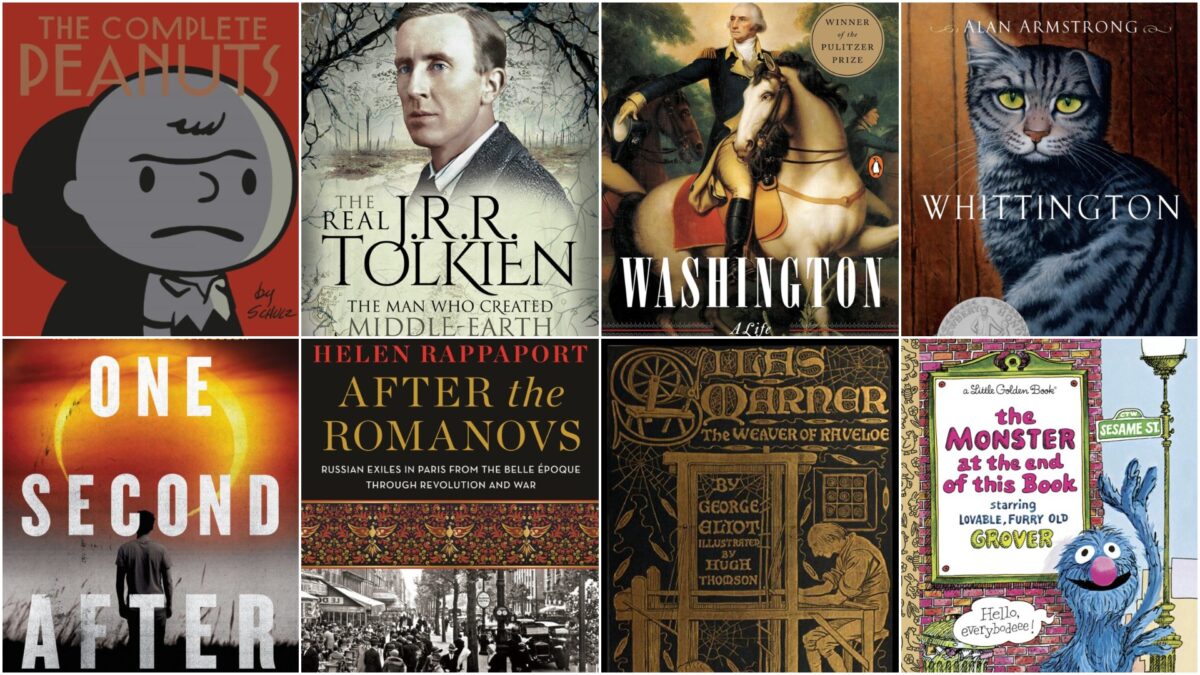 This week’s selection features biographies of George Washington and J.R.R. Tolkien, and a classic about healing through a child’s love.

A Stroll Down Memory Lane

‘The Complete Peanuts’
By Charles Schulz

There are 26 volumes of the “Peanuts” cartoons. This set features some strips dating back to 1950 and previously unpublished. This is a great way to keep these memorable characters around forever, including Charlie, Linus, Lucy, and, of course, Snoopy. Great for laughs.

‘One Second After’
By William Forstchen

America is thrown back into the 19th century when an electromagnetic-pulse attack knocks out cars, computers, phones, and electricity. John Matherson, an Army veteran and now a college professor in a small mountain town of North Carolina, finds himself struggling to save his family, his friends, and the town itself in the ensuing horror and chaos. They run out of medicines, nearly starve, and find themselves fighting for their lives against a band of marauders intent on killing or enslaving them all.

Exiled From the Bolsheviks

‘After the Romanovs’
By Helen Rappaport

Paris was a second home to Russia’s nobility from the late 19th century until World War I. Some, in fact, visited year-round. Following the Russian Revolution, many fled to France for safety. This book follows these Russians in France before and as expatriates after the Revolution. It shows how princes who had lived in luxury were reduced to driving taxis and how their wives had to work at fashion houses. As they carved out new lives in a strange land, they also had an impact on their new home.

An Ordinary and Extraordinary Man

‘The Real J.R.R. Tolkien: The Man Who Created Middle Earth’
By Jesse Xander

J.R.R. Tolkien may be the most beloved 20th-century author with the most diverse reader base, as he appealed to readers across the spectrum. This book offers a fresh look at Tolkien’s life. Xander reveals Tolkien as simultaneously archetypically ordinary and extraordinarily remarkable, an obscure professor who wrote momentous fiction. It offers a fascinating look at the author and the influence Tolkien has on modern letters.

A Great Single Volume on Washington

‘Washington: A Life’
By Ron Chernow

Here is an incredible single volume on the life of the great and the good man George Washington. Ron Chernow has produced a great work for those hoping to receive a fair, detailed, and beautiful glimpse into the man’s life as a youth, soldier, farmer, general, and president. It’s a worthy addition to works on our first president.

Falsely accused of stealing money from his church, weaver Silas Marner departs town for Raveloe, where he’s a stranger. He keeps to himself, turns his back on God, and hoards the money he earns. When his gold coins are stolen, he is crushed, but then one night he finds a golden-haired toddler asleep on his hearth. Her mother has died, and so Silas raises the child, naming her Eppie. This sweet girl becomes the tool of his salvation, bringing him back into the company of others and allowing him to learn to trust again.

Cats, Kids, and Learning to Read

A stray cat makes his way to a barn full of rescued animals, where he tells them and two children, Ben and Abby, stories about his ancestor who had helped Dick Whittington. Meanwhile, with their help, Ben becomes a better reader.

‘The Monster at the End of This Book’
By Jon Stone, Illustrated by Michael Smollin

Introduced in 1971, featuring the “lovable, furry old Grover,” this book has become a childhood staple and will have readers laughing as Grover boisterously laments each turning page, getting ever closer to the so-called monster.