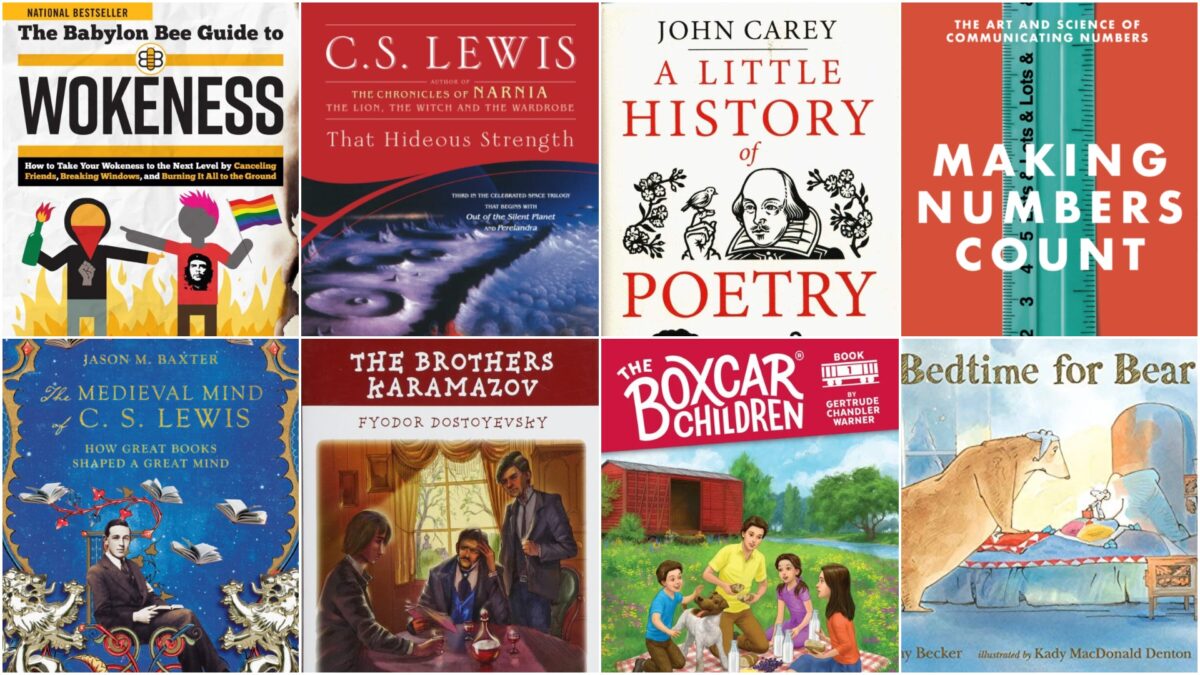 This week’s selection of books includes a satire on our times, a novel by C.S. Lewis, and a book to help us communicate and understand numbers.

The world has truly gone insane, and sometimes the best way to reflect the insanity is through satire. The Babylon Bee’s new book is a goldmine of hilarious graphics and text that will keep you laughing and open your eyes to how destructive “wokeness” is.

Dystopian Battle of Good and Evil

‘That Hideous Strength’
By C.S. Lewis

Set in England, this final novel in Lewis’s space trilogy features a struggle between power-hungry utopians seeking to create a totalitarian government and those who resist them. The utopian crew belongs to an organization called the National Institute of Coordinated Experiments, or N.I.C.E., which hopes to retool society, culture, and human nature itself. Although the resistance, led by an otherworldly director, seems without resources, cosmic forces—including a resurrected Merlin—come to their rescue.

‘A Little History of Poetry’
By John Carey

Poetry, the oldest language art, predates literacy. Its cadence, rhythm, and rhyme allowed complex things and events to be remembered. When literacy arrived, the first literature recorded was poetry. Written for a general audience, this book delivers a short history of poetry, offering a useful introduction. Carey starts at 4,000 B.C. with the Epic of Gilgamesh and continues through the poets of the 21st century. It may introduce you to previously unknown poets or renew old friendships.

‘Making Numbers Count: The Art and Science of Communicating Numbers’
By Chip Heath and Karla Starr

Most people have trouble with numbers. They can easily visualize numbers up to 12. Beyond 100, numbers blur together. This book presents tools to understand numbers and effectively communicate their meaning to others. Through some simple rules, the authors provide a step-by-step process to allow mastery of the incomprehensible. It’s written both for those who intuitively grasp numbers and those for whom they are baffling.

Musings on the Masters

‘The Medieval Mind of C.S. Lewis’
By Jason M. Baxter

Regarded as one of the great minds of the 20th century, C.S. Lewis is perhaps best known for his fantasy literature, mostly “The Chronicles of Narnia.” In his early 30s, Lewis converted to Christianity; he’s likewise famously known for his works of apologetics such as “Mere Christianity.” What books sparked his keen imagination?

A Masterpiece of Mind and Spirit

‘The Brothers Karamazov’
By Fyodor Dostoyevsky

This sweeping tale looks at the meaning of religion, guilt, morality, life, and death. When their father is murdered, brothers Dmitri, Alyosha, and Ivan seek to come to grips with their past and present. Dmitri is the sensualist, Ivan the intellectual, and Alyosha the spiritual guide who tries to bring peace to those around him. Key themes in this often-dark story are the search for God and faith and the transformative power of forgiveness and mercy. It’s considered by many to be one of the greatest novels ever written.

Orphans and siblings Henry, Jessie, Violet, and Benny make a home in an abandoned boxcar, but then go to live with their wealthy grandfather, who makes their beloved boxcar a playhouse. This is the first in the long “Boxcar” series.

‘A Bedtime for Bear’
By Bonny Becker, Illustrated by Kady MacDonald Denton

A delightful installment of Becker’s Bear and Mouse series, “A Bedtime for Bear” engenders smiles throughout as the lovable Bear, who likes everything “just so,” hosts his first overnight guest (Mouse), who makes “quite a racket.”