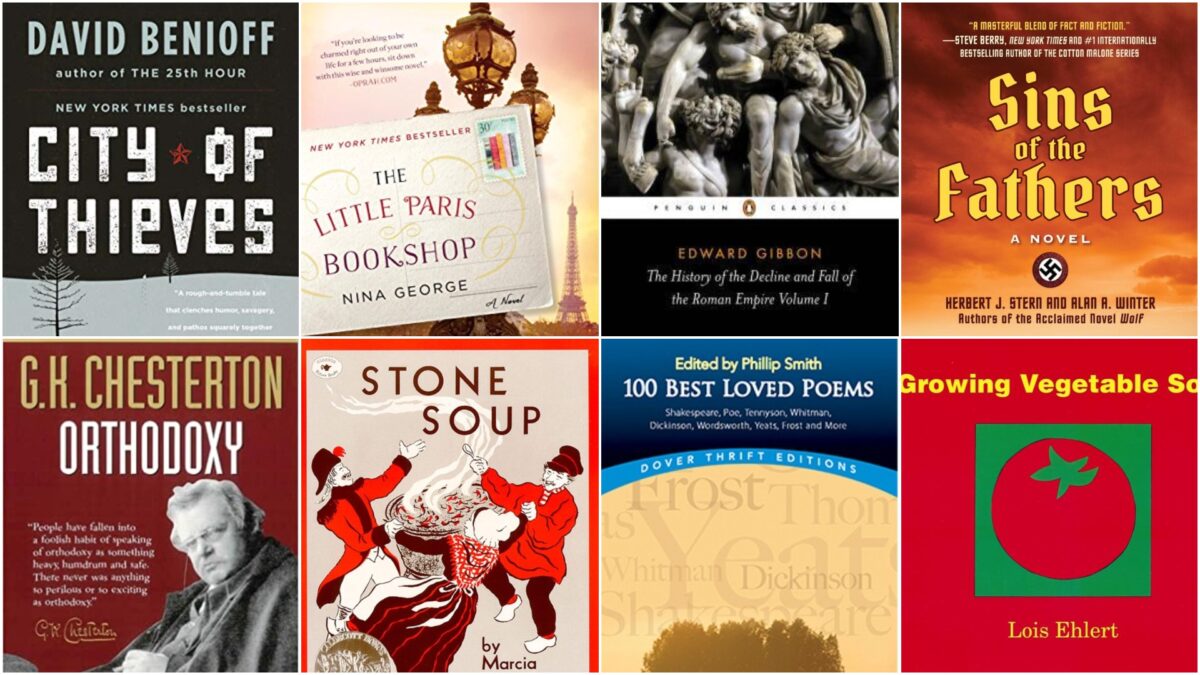 This week, we range from a collection of first-rate poetry to a fictional work on the rise of Adolf Hitler for a great selection of recommended reads.

‘City of Thieves’
By David Benioff

The Nazis have invaded Russia and besieged Stalingrad. Lev and Kolya, two Russian prisoners, can avoid execution if they accept a mission to find 12 eggs for a Soviet colonel’s daughter’s wedding cake. This book has great action, memorable characters, and incredible writing.

Books, a Barge, and Broken Hearts

Jean Perdu sells books and dispenses advice via literature from his barge on Paris’s Seine River. Accompanied by a bestselling author and an Italian chef, Perdu sets off in his boat to discover the fate of a woman he had loved long ago. On this adventure, the three become fast friends and work their way through personal difficulties. Here’s a romantic novel with a French background, literary references, and even some recipes. If those ingredients appeal, then you’ll enjoy this story of a floating bookshop.

How the Roman Empire Fell Apart

This is one of the greatest works of human genius. In the mid-1700s, Sir Edward Gibbon wrote six volumes about the Roman Empire, with the first volume being published in 1776. He begins the work with the throne of the Caesars being ever in turmoil and up for grabs. The empire shifts its power from West to East and back, with wars and coups being nearly constant. The author weaves the tale majestically through the lives of the Caesars and through the Byzantine era. It’s a masterpiece that should be read.

Trying to Stop the Rise of Hitler

‘Sins of the Fathers’
By Herbert J. Stern and Alan A. Winter

The second book in a series is set within the years of Adolf Hitler’s rise. The authors traverse the decisions made within and without Germany that ultimately brought Hitler to power and empowered him to overtake numerous countries. Protagonist Friedrich Richard, Hitler’s fictional best friend, SS officer, and confidant, works tirelessly to bring Hitler’s reign to an end. A fun, historically accurate, and highly detailed book.

G.K. Chesterton was one of the most influential thinkers of the 20th century. His mix of humor with devastating truth about modern society reverberates in the 21st century. “Orthodoxy” is a work of genius that indicts the postmodern movement for moving society in the wrong direction. It reads like a book that was written for 2022.

This collection features some of the greatest and most beloved poems in the English language. It opens with ballads from long ago, moves to Elizabethans such as Marlowe and Shakespeare, and then guns its way through luminaries such as Poe, Tennyson, and Emily Dickinson up to the great bards of the 20th century. This book is a great reminder of the glory of the English language. Each selection includes a brief biography of the poet. It’s perfect for everyone from high schoolers to adults just wanting to read or revisit great verse.

A Lesson in the Joys of Sharing

In this French folk tale, three hungry soldiers tell stingy villagers that they can make soup from stones. Their problem? They need more ingredients. The gullible villagers supply the extras and create a feast. The reading age for this book is between 4 and 8 years.

Bright, modern graphics and a simple text celebrate the joys of gardening and harvesting. The descriptive labels accompanied by bold graphics add educational value. It even concludes with a soup recipe for young readers to try.