Enthusiasm for Shen Yun Bubbling Forth From Mezzo-Soprano 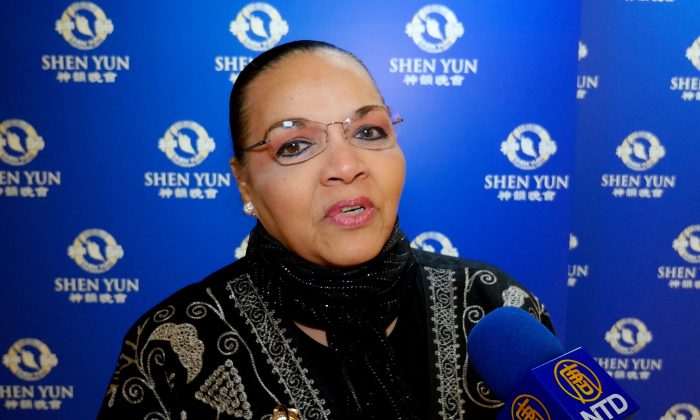 A Julliard graduate, Ms. Myers debuted at the Metropolitan Opera under James Levine. Her opera and concert career spanned performances in Europe, Mexico, and the Caribbean, in addition to the United States.

“I love your soprano,” the singer said, sharing a few words about the performance at Lincoln Center after the March 5 matinee.  “The soprano is delicious.”

Ms. Myers heard soprano Haolan Geng three years ago at Carnegie Hall, and said, “She blew me then, and she blew me away again tonight.”

Haolan Geng, a graduate of China’s Guangzhou Conservatory of Music, starred with the Guangdong Opera Company before gaining international attention in 2009 when she won first place in the International Chinese Voice Competition sponsored by New Tang Dynasty Television.

The feat of singing in Chinese and yet maintaining the Italian bel canto style is a rare achievement, which only Shen Yun performers may have mastered.

Ms. Myers’s animated praise began with lauding the soprano, but  soon included almost every aspect of the performance by the New York-based classical Chinese dance and music company.

She loved the costumes and picked out the combination of orange and emerald green in one piece that particular struck her as distinctively Chinese.

Of the dancers, she felt the men were incredibly virile and the ladies so very “elegant and so poised,” and noted the obvious training behind the tumbling and aerial techniques which are a hallmark of the dance.

“The precision is out of this world in this company, unbelievable, you know,” she added, describing the way the large groups of dancers maintain seemingly flawless uniformity.

The choreography is out of this world, she said, and the emcees delightful. Their explanations before each dance made a glance at the programs unnecessary. “Everything is so beautifully represented, so clear,” she said.

“I will come every single time if you come to America, and to New York, I am going to be here. Just unbelievable,” Ms. Myers said.

Of the orchestra which combines traditional Chinese instruments with a full Western orchestra, she gave compliments and a “bravo” to both the conductor and the players.

“There is no show in the world like this, you know,” she said. “I’m going home now and start calling: ‘You’ve got to see them, got to get over there.'”