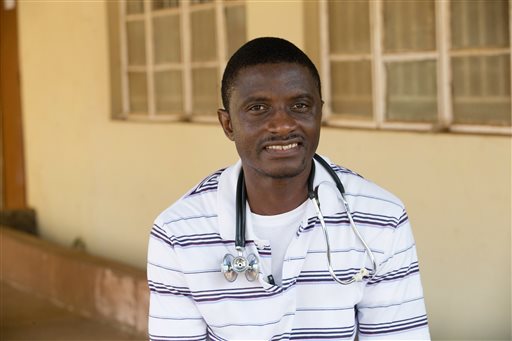 Initially, when surgeon Martin Salia’s Ebola test came back negative, he and his friends were elated. As noted by The Washington Post, they all sort of celebrated a bit, and relaxed, removing their protective gear and crying with him.

But his symptoms would not go away, and when they lasted another week, Salia was tested once again, on Nov. 10. And this time, the test came back positive, “sending the Sierra Leonean doctor with ties to Maryland on a desperate, belated quest for treatment and forcing the colleagues who had embraced him into quarantine,” the Post reported.

Now, Salia has died while being treated at the Nebraska Medical Center in Omaha, an institution that has treated other Ebola patients. And his family is wondering if the results would have been better had the first test come back positive and he had received more timely treatment.

“We were celebrating. If the test says you are Ebola-free, we assume you are Ebola-free,” Komba Songu M’Briwa, who took care of Salia at the Hastings Ebola Treatment Center in Freetown, told the paper. “Then everything fell apart.”

Salia’s widow, Isatu, lives in New Carrollton, Maryland. They have two children — 12 and 20 — and both of them also live in the U.S. And though he had visited the Maryland residence, he had devoted most of his time to caring for the sick in Freetown.

“Dr. Salia was extremely critical when he arrived here, and unfortunately, despite out best efforts, we weren’t able to save him,” Phil Smith, medical director of the biocontainment unit at Nebraska Medical Center, told the Post and other reporters.

In a sign that the Ebola epidemic still poses a danger, even though it may have eased in parts of Liberia, the Centers for Disease Control and Prevention announced Sunday that airport screening will begin for travelers arriving in the United States from Mali, which lies inland from Sierra Leone and Liberia and has begun to report cases of the disease.

The country of Sierra Leone has seen its creaky medical establishment completely rocked by Ebola, and the infection — and now death — of yet another doctor was particularly hard-hitting. Since the current outbreak began, now the worst since the disease was discovered in 1976, 320 health workers in the country have died from Ebola. In recent days, workers have added faces to billboards around Freetown of doctors who have died, with the words, “Some of our national heroes killed by Ebola.”

The medical facility where Salia worked in Freetown has been closed, health officials said, and three of his co-workers have been placed in quarantine in the surgery ward where he used to treat patients.

He Continued to Have Symptoms

Physicians who looked after him in the Sierra Leonean capital seemed not to be aware that early Ebola testing — taken within the first three days of showing signs and symptoms of the illness — is not always conclusive. And, in a nation where Ebola-related disease information is not well disseminated, the lack of knowledge served as another tragic mistake.

In a number of cases, negative Ebola tests at that early stage mean nothing, because “there aren’t enough copies of the virus in the blood for the test to pick up,” according to Ermias Belay, head of the Center for Disease Control and Prevention’s Ebola response team in the beleaguered country.

However, M’Briwa and others thought the test was definitive proof of non-infection, though Salia continued to run a fever and suffer fatigue and weakness for days afterward. The first lab results came from a team of Chinese lab technicians who were operating a nearby hospital. The Post said those technicians declined to speak to reporters on the record about Salia’s case.