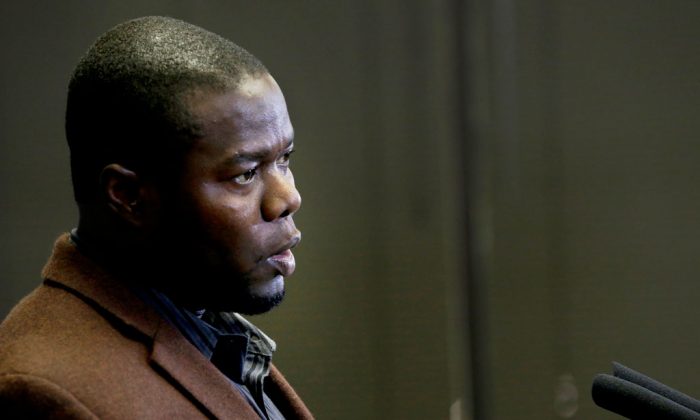 Josephus Weeks, nephew of Thomas Eric Duncan, speaks during a news conference in Dallas, Wednesday, Nov. 12, 2014. The hospital that treated Duncan, the only Ebola patient to die in the United States, will pay his relatives an undisclosed sum and create a charitable foundation in his name, the family’s attorney said Wednesday. (AP Photo/LM Otero)
Health

DALLAS—The hospital that treated the only Ebola patient to die in the United States will pay his relatives an undisclosed sum and create a charitable foundation in his name, the family’s attorney said Wednesday.

The agreement heads off a lawsuit from relatives of Thomas Eric Duncan, who died Oct. 8 at Texas Health Presbyterian Hospital Dallas.

Duncan, who arrived in North Texas from Liberia on Sept. 20, was initially sent away from the hospital’s emergency room with antibiotics, something Presbyterian administrators have acknowledged was a mistake. He returned to the hospital in an ambulance two days after his release and was quickly diagnosed with possible signs of Ebola, which has killed more than 5,000 people in West Africa.

Attorney Les Weisbrod declined to say at a news conference how much money the family would receive but said the settlement was a “very good deal” that would provide for Duncan’s parents and his four children. Weisbrod also said Presbyterian hospital was not charging Duncan’s family for his medical treatment. The foundation will assist efforts to fight Ebola in Liberia, he said.

Duncan’s nephew, Josephus Weeks, has previously been critical of the care Duncan received, saying his death was partly due to his race, nationality and lack of insurance. But on Wednesday, he credited Presbyterian’s officials for moving quickly to settle the case and acknowledge mistakes.

Weeks said he will be “the face of the foundation,” which he hopes will lead to a new hospital or the dedication of a hospital wing in Liberia.

“The main focus is that Eric’s name is on something and everybody knows that he didn’t die in vain,” Weeks told The Associated Press.

Texas Health Presbyterian Hospital Dallas confirmed the creation of the foundation in a statement and said it has “amicably addressed all matters” with Duncan’s family.

The hospital has apologized for releasing Duncan the first time, and after initially denying he had told them he was from West Africa, they acknowledged key caregivers missed his travel history in their record system.

Duncan’s sister, Mai Wureh, said that the hospital had satisfied her request for the remainder of her brother’s medical records, including lab results of his treatment with the experimental drug brincidofovir.

Wureh also said she and Weeks met Wednesday morning with John Mulligan, the nurse who administered the drug.

“He gave me closure because he was the last one in that room. He was able to talk to him, comfort him. He held onto him, and that made me feel better. At least he didn’t die alone,” Wureh told AP.

Louise Troh, Duncan’s fiancee, will not receive anything in the settlement, Weisbrod said.

Duncan’s family would have faced a very high bar had they filed a lawsuit against Presbyterian hospital. Texas medical malpractice law places a $250,000 limit on noneconomic damages related to pain and suffering in almost all cases.

It also gives extra protection to emergency room doctors and nurses. Instead of just proving that Duncan’s doctors were negligent in his care, Duncan’s family would have to prove that any negligence was “willful and wanton” — essentially, that doctors knew they were causing harm.

Two Presbyterian nurses were infected during Duncan’s care; both have recovered. More than 100 people who had contact with Duncan and the two nurses have been cleared after 21 days of monitoring for Ebola symptoms.

From The Associated Press. AP writer Nomaan Merchant contributed to this report.