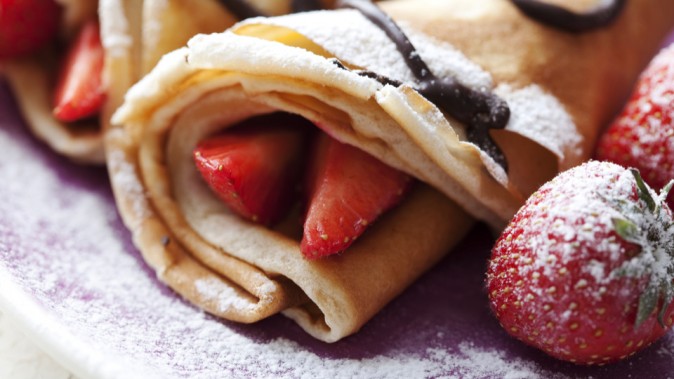 You’ve heard the saying “Life is short.  Eat dessert first.”  Do you know anyone who always wants to order dessert first when out to dinner…just in case? Perhaps you are that person.

Take it one step further.  Instead of just eating dessert before dinner, why not eat it before lunch? How about chocolate cake at breakfast?

If that sounds like a diet disaster, think again. Research from Tel Aviv University presented at a meeting of the Endocrine Society finds that eating dessert as part of a balanced 600 calorie breakfast can help you lose weight and keep it off for the long haul.

Does it sound too good to be true? Maybe not. According to the researchers, if you indulge in dessert in the morning as part of a meal that includes proteins and carbohydrates, your body’s metabolism is more active and you may be better able to burn off those sweet calories during your day.

In addition, you might find that having dessert at breakfast prevents you from obsessing on what you really want and helps you lose the cravings for sweets the rest of the day. On the other hand if you try to cut out treats altogether, you might develop a psychological addiction to the very thing you’re trying to avoid.

In the 32 week study of 193 dieters, participants ate the same number of calories on a daily basis but half of them added cookies, cake or chocolate to their breakfast. Surprisingly, the dessert-eaters lost an average of 40 pounds more than dieters who abstained, and they kept the weight off longer.

How can this be? The researchers noted that ghrelin, the hormone that increases our sense of hunger, is most effectively suppressed at breakfast time.

There seem to be two things going on here. One is that while the dessert-eaters had the same total daily calories as the other dieters, they ate more of their calories earlier in the day. It’s not clear whether you could just increase calories (maybe more fruits, vegetables and whole grains) at breakfast to get the same result.

However, the other thing that may be significant is that the dessert-eaters avoided cravings that often accompany a restrictive no-dessert diet. In fact, the no-dessert-eaters lost just as much weight as their peers during the first half of the trial but regained most of it during the second half – evidence that they just couldn’t stick to the diet over the long haul.

The researchers concluded that it’s better to curb cravings than to be overly restrictive about dessert.

One word of caution: the successful dieters were not eating only sweets at breakfast. Their meal consisted of a balance of protein and carbohydrates. So this study is no green light for a breakfast of donuts and brownies, but it will be of great comfort to many dessert-deprived dieters.

*Image of “crepes” via Shutterstock