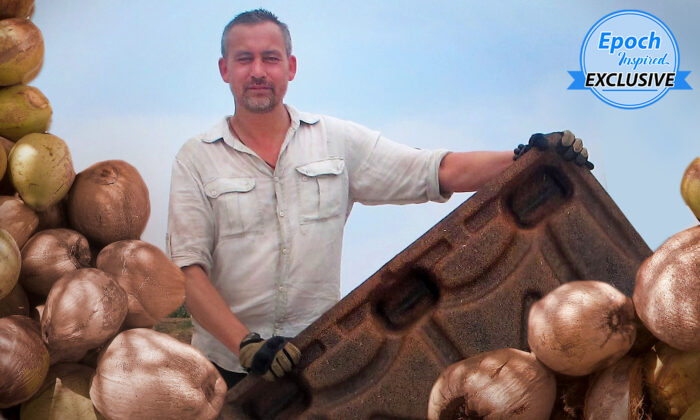 From serving in the Dutch army to living on a beach in Barbados, Michiel Vos has trekked the globe finding his niche. Perhaps taking a cue from the beach where he once lived, Vos realized that coconuts were exactly what the world needed.

Supply chain backlogs in California are in the news lately, but another shipping challenge posed are the 1.7 billion wooden pallets annually shipped one-way from China—where wood is scarce and valuable—and worthlessly discarded stateside. That’s 170 million trees felled per year.

That’s where the coconuts come in.

One day, an agricultural professor handed Vos a paper on how to make panel board from coconut husk, which looked promising. Though he was told that it would never work, and no one succeeded making it into a viable business, Vos wasn’t convinced.

“That remined me of a quote from my favorite poet Rumi, ‘When setting out on a journey, do not seek advice from someone who never left home,’” Vos told The Epoch Times.

He set out to northern China, found a tool shop to manufacture him a press, and after plenty of research, Vos learned how to make a pallet out of worthless coconut husks—in a way that is profitable.

“The first two years were quite disastrous and frustrating, but after many trials, we were able to make a decent set of pallets,” he said.

As a material, coconut husk, said Vos, who launched CocoPallet, is a bulky, light-weight waste product in Asia with no appreciable use and is disposed of by burning in places like the Philippines. Long-distance transport of the material is just not feasible in manufacturing.

“In our case, we need massive amounts of coconut husk nearby,” Vos said. “Just like any other business, we need talent, clean and reliable energy, housing, and a reliable government, and so on. Our focus for the first large plant is now in the south of the Philippines.”

Vos sought a niche in a part of the world where bamboo is far more common than wood trees—such as pine—which, he said, makes great furniture but makes less sense as single-use pallets in the shipping industry. Environmentally, the venture will “save millions of trees” per year, he said. CocoPallet claims to save 0.5 million trees annually.

Making pallets in Asia for shipping to America only makes sense; that’s the direction products are moving. The pallet market is wide open for a cheap alternative to expensive wood; low cost, sustainable project models that can be scaled up will attract investors.

All of which led Vos to set up a plant in the Philippines.

The intrepid Dutchman delved deep into the local people’s economy to learn the ins and outs of the coconut trade where he obtains his wares directly. He visits farmers and co-ops to grasp how they’re run on the ground. “You can only do this by getting yourself out of the office and in the fields, deep listening, eating together, and connecting,” Vos said. “This is also the part I truly love.”

“We source the coconut husks, we mill it to small parts, we dry this matter, feed it in the massive presses and make CocoPallets 24/7,” he explained. “You do not want the machines to cool down and at the same time make maximum use of your capital investments.”

CocoPallet is geared toward producing the smallest carbon footprint possible, using biomass to power their boilers; and at the opposite end of the supply chain, single-use coconut husk pallets can serve as organic soil improver of considerable value to replace peat moss.

CocoPallet’s model has attracted global interest in investment. Vos says real-impact investors don’t shy away from setbacks he’s had, which are normal in innovation; meanwhile, capital looking to back “green” projects abounds—few of which are scalable and cost-effective like CocoPallet is.

“Investing in tobacco, fossil fuels, landmines is not done anymore,” Vos explained. “This will result in a competition for project such as ours.”

Governments, like the Netherlands and EU, also embrace ventures like CocoPallet, which “tick all the boxes” in “sustainability,” Vos added. Locally in the Philippines, Vos’s company could improve the lives of people in rural areas and has been endorsed by the Philippine Coconut Authority (yes, a real ministry).

As for CocoPallet’s future, Vos fathoms his limits and recently welcomed aboard its new CEO and CFO, who know the Asian pallet industry through and through, and have built factories around the globe.

“When I ever stand in the way of the growth of the company, I will leave immediately and step aside for people who are better fit for the job,” Vos said. “The brilliant thing of working with great people, you create a time accelerator. Everything goes so much faster.”

Looking forward, Vos daydreams: “An importer from California might say to her manufacturer of teddy bears in Chengdu, China: ‘Please use a CocoPallet instead of the wooden pallet, we can sell these to a local pot soil company after arrival, and you save some cash.’”