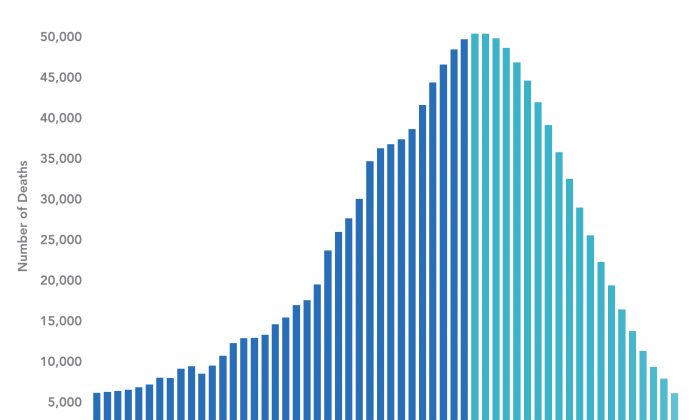 The epidemic of drug overdose deaths will peak in 2017 then recede until 2035. (Mailman School of Public Health)
Health News

Drug Overdoses Expected to Peak in 2017

In a study of smallpox in the mid-1800s, pioneering British epidemiologist William Farr made the astonishing discovery that the rate and duration of the epidemic’s rise was mirrored in its decline.

More than 150 years later, researchers at the Mailman School of Public Health have taken Farr’s Law out of retirement and put it to new purpose: to project the trajectory of the drug overdose epidemic in the 21st century.

At present, more than 40,000 Americans die every year by unintentional drug overdose—a number that has ballooned tenfold since 1980.

While overdose deaths have reached epidemic proportions, would William Farr sanction this novel use of his law? Can Farr’s Law apply to a phenomenon like drug overdose?

Salima Darakjy, a doctoral student in Epidemiology and the study’s first author, makes the case by pointing to the other end of the timeline of epidemiologic innovation. In the last 10 years, she says, scientists have developed a theory of “social contagion,” which suggests that non-infectious epidemics like overdose deaths follow a dynamic much like what Farr saw with smallpox, but instead of spreading by way of a virus, they propagate through social networks.

“To some extent, drug use is a social behavior and has the potential to spread like a contagious disease among individuals in a network,” says Darakjy.

By applying Farr’s Law to overdose data from the National Center for Health Statistics, Darakjy and her co-authors projected that the epidemic will top out at about 50,000 annual deaths in 2017 before declining to a non-epidemic state of approximately 6,000 deaths in the year 2035—at roughly the same rate seen before the start of the epidemic. All told, they estimate the epidemic will claim upward of 1.3 million American lives by the time it recedes. Their results appear online in the journal Injury Epidemiology.

According to the paper’s senior author Guohua Li, professor of Epidemiology and director of the Center for Injury Epidemiology and Prevention at the Mailman School, the time is ripe for a revival of Farr’s Law. Future studies may explore other non-infectious epidemics like obesity as well as outbreaks like Ebola in West Africa. Farr’s Law, he believes, could prove more accurate than complex computer models. “None of these complex models appears to outperform the simplest: Farr’s Law,” says Li. “But it’s so old that few epidemiologists today know about it.”

The Mailman School researchers say their projections are based on data showing drug overdoses have already slowed, driven by a decline in prescription painkillers, which account for two-thirds of all the drug deaths. While tighter rules on painkillers have led some users to switch to heroin, Li says this substitution effect is unlikely to alter the course of the epidemic.

But the overdose epidemic—like most epidemics—won’t end by itself. In their calculation using Farr’s Law, the researchers assume a steady commitment by public health to prevent overdoses. Congress has committed $20 million in 2015 to the Centers for Disease Control and Prevention for controlling the drug overdose epidemic.

Li stresses that public health efforts must continue even as the number of deaths drops off. “A decline in overdose deaths shouldn’t be used as justification to pull back,” he says. “That would be wrong. If there is no intervention then the epidemic will last much longer.”

“If the epidemic of drug overdoses is indeed waning,” the researchers conclude, “it may imply that the intensified efforts in recent years, such as enhanced prescription drug monitoring, are working and should be continued.”