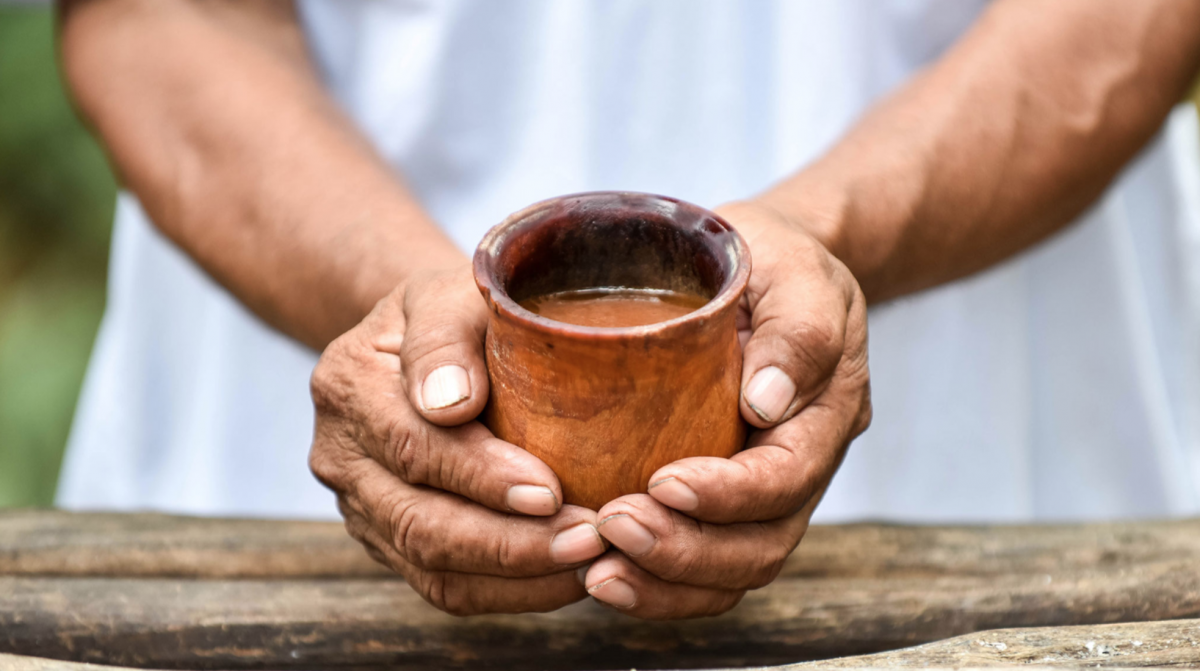 Xocolatl, the drink’s ancient ancestor, was neither hot nor sweet
BY Amanda Burrill TIMEFebruary 27, 2019 PRINT

This origin story is chock full of cosmic healing, international exploration, and closely guarded secrets. My kind of tale.

Did you know: The Institute of Culinary Education in New York City has a world-class Chocolate Lab, run by James Beard Award-winning pastry chef Michael Laiskonis. While I finished my culinary education in 2011, I am always game for workshops to brush up on my skills or learn something new. In the Chocolate Lab, I recently learned that well before becoming one of the world’s premier edible indulgences or a warming wintry drink, chocolate was revered as a tepid, liquid gift from the gods that didn’t taste good.

Evidence suggests chocolate was being used by pre-Olmec cultures as early as 1900 B.C., and we know for certain that their descendants, the Mayans of Mesoamerica, were using it by 200 A.D. Mesoamerica is the name used to describe the Mayan homeland, known today as the Central American countries of Belize, Guatemala, Honduras, El Salvador, and Mexico’s Yucatan Peninsula.

The word “chocolate” is believed to come from the Mayan “xocolatl,” which means “bitter water.” There was no sugar in Central America at the time, so this was no sweet treat. To make xocolatl, the beans inside cocoa pods were harvested, dried, crushed, and combined with chili peppers and cold water. Some accounts state that cornmeal was used as well. The liquid was poured from one vessel to another until a frothy foam appeared on top.

Xocolatl was often consumed during religious ceremonies and marriage celebrations, and was valued for its healing, medicinal, and aphrodisiac properties. Decorated Mesoamerican artifacts and temple walls depicted kings and gods imbibing the bitter drink, showing how closely cacao was woven into Mayan society. Turns out, they were onto something.

Cacao’s nutritional value and noted health benefits make it a modern-day “superfood.” It’s high in calcium, iron, and magnesium, which contributes to heart health, and packed with antioxidants, compounds known to prevent or delay some kinds of cellular damage. The noted aphrodisiac properties of the ancient drink make sense, too, as cacao contains mood-boosting serotonin and dopamine, as well as phenylethylamine, thought to elevate mood and increase energy.

All Mayans could enjoy xocolatl, regardless of their social status. Think of it like a healthy version of modern-day champagne, often used to celebrate but easily enjoyed any day of the week. And as outsiders exposed to Mayan culture caught on to the drink, the demand for cocoa beans helped establish a network of trade routes throughout the region.

By 1400 AD, Mayan power had greatly decreased and the Aztecs came to dominate Mesoamerica. Cocoa beans wouldn’t grow at the heart of their civilization, the dry highlands of central Mexico, far from the Mayan rainforests, so they forced the Mayans to trade and pay taxes in cocoa beans. The beans became Aztec currency, and though their money really did “grow on trees,” the drink was a luxury few could afford. Montezuma, the Aztec king, supposedly drank 50 cups of cocoa a day—extra if he was going to meet a lady friend.

Christopher Columbus landed in the Americas in 1502 and brought cocoa beans back to King Ferdinand and Queen Isabella in Spain, but they weren’t especially interested. In 1519, the Spanish conquistador Hernan Cortes landed in present-day Mexico and was offered a cup of cocoa by Montezuma himself. Though he didn’t enjoy the bitter drink, he was amazed at how the Aztecs valued it. He found that warming the drink made it taste better, and voila! “Hot chocolate” was born.

When Cortes returned to Spain in 1528, he brought not only cocoa beans, but also the metate, the mealing stone used to grind the beans, and the recipe and enthusiasm for making the chocolate beverage. The Spanish kept cocoa beans secret from the rest of Europe for decades. In 1579, some foolish English pirates attacked a Spanish merchant ship filled with cocoa beans and, mistaking them for sheep droppings, burned the Spanish vessel in frustration.

In Spain, cooks experimented with the recipe, adding sugar to sweeten it. Spaniards enjoyed the drink during church services and even during Lent, as it was considered necessary for health and energy.

In 1615, drinking chocolate was noted at a royal wedding in France. In the 1650s, chocolate houses, like the coffee houses of today, popped up in both France and Great Britain.

A Dutchman named Coenraad Van Houten discovered that adding alkaline salts to powdered chocolate helped it mix better with water. His process, called “Dutching,” after his nationality, made chocolate smoother, creamier, and tastier by reducing bitterness. Then, in 1829, he invented the cocoa press, ushering in the modern era of chocolate.

The “food of the gods” has come a long way from the bitter Mesoamerican drink. I would include a recipe for xocolatl, but you don’t want to taste it. Trust me—I took one for the team by tasting it before proceeding with the rest of the chocolate workshop. My tastebuds are thankful for the trajectory cacao has seen through the ages. Following its gradual evolution from bitter drink to delicious treat, our samples became sweeter and creamier, and ended in some of Chef’s world-class creations. Progression complete!

Below is Chef’s favorite modern recipe for hot chocolate, inspired by Mexican-style chocolate prepared today, warmed by spices and a dose of dried smoked chilies.

Combine the milk, cream, sugar, salt, spices, and the vanilla bean in a medium sauce pan and bring to a boil over medium heat. Reduce heat to low and hold at a bare simmer, stirring occasionally, for five minutes.

Whisk in the chopped chocolate and continue to simmer an additional five minutes. Remove the vanilla bean and the whole spices. Blend well with an immersion blender to create a froth and serve immediately.