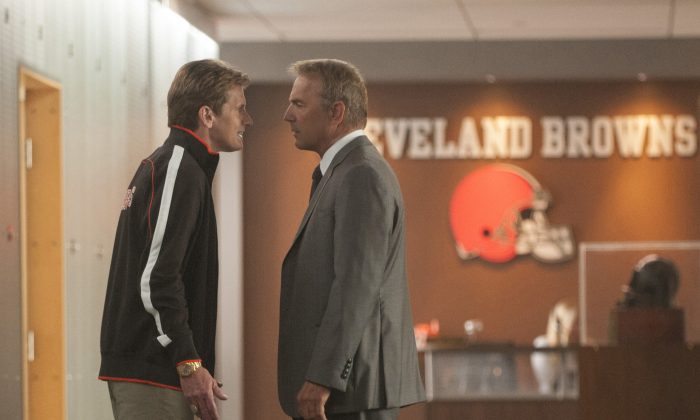 ’Draft Day’: A Dude-Flick for the Hardcore Sports Fan

The NFL Draft—it hypes football sort of like the Oscar hypes movies. Public picking of players for pro ball makes money. Is “Draft Day” an infomercial for the NFL? Of course it is. It’s big hype. How do we know this? Commissioner Roger Goodell has a speaking role. Enough said.

Is that good movie material? Is that an interesting topic? Are you a football fan? Quit your complaining! You know you’re going to see it.

Not a fan? Not a problem. If you liked “Moneyball” and “Trouble with the Curve,” you’ll like the dude-fest that is “Draft Day.” How do we know this? It has Kevin Costner. It’s not “Bull Durham,” but it’s not bad. The ladies like Kev too, so you can even do a “Draft Day” double date.

Stealing the ticking-clock visual from the hit TV show “24,” “Draft Day” packs the normally bloated three-day draft process into one harried, decision-making day in the life of Sonny Weaver Jr.

Sonny (Kevin Costner) is the general manager (“GM” to those of you fluent in American sports-speak) of the sorry-loser Cleveland Browns. His choices this day can make or break Brown-ville. Will he save football in Cleveland by trading for the No. 1 pick? Everyone hopes so.

Especially the team owner (Frank Langella, all Learjet and clad in dark shades), who nags Sonny for “something splashy.”

The head coach (Denis Leary playing Coach Penn as only Denis Leary can) wants a team he can work with.

Will Weaver pick an aggressive, whip-smart, family-man, defensive back (Chadwick Boseman in the “Jerry Maguire” Cuba Gooding role)? Or will it be the slick, morally suspect Heisman Trophy winner?

Who else is up for grabs? There’s a Florida State halfback, an otherwise good kid despite a rap sheet for under-the-influence shenanigans. His dad was a Cleveland Brown before him. Good opportunity for a GM-to-potential-player “Can you behave yourself?” speech.

The bottom line is, Weaver values principles and integrity. So is he going to kiss the owner’s ring? Kiss the head coach’s much-brandished Super Bowl ring? Or step into his own belated greatness?

Woven into Weaver’s sports life are threads of his annoying mom (a scene-stealing Ellen Burstyn), the story of how he fired his dad (the Browns’ previous coach), as well as his salary-cap expert and pregnant girlfriend (Jennifer Garner).

We’ve seen lots of this type of “Art of the Deal” maneuvering—how GMs spread gossip, bait and switch, gamble, anticipate, mislead, haggle, and play angles against each other. It never gets old. It’s also the best part.

What with the NFL, ESPN, and the NFL Network all over this film like white on rice, it all feels pretty authentic.

Kev is doing perhaps a bit too much of the Low-Key-Kev. He can do this kind of role while in a coma. And we’ll still go pay to watch. That’s a movie star.

The actual NFL draft doesn’t contain a lot of drama, per se, except for the most grizzled sports fans: the freezing-weather, naked, cheese-head-wearing, holler-til-yer-hoarse, war-paint freaks. You know who you are. Bless you. That’s America. Sports around the globe, actually. It’s a tribe.

The reviewer sat next to two such tribal members at the screening. They didn’t have their war paint, but he could recognize them. For there was much derisive snorting, eye rolling, leaning forward, and slamming back, accompanied by vigorous upward throwing of hands.

Upon exiting the theater, they were overheard to say that this movie was a … well, a disappointment. The reviewer is not so sure about that.

The reviewer bets that these dudes will have a copy of “Draft Day” in their personal collection the minute it comes out.

“Draft Day” is a dude-flick that sports dudes will love to diss, while enjoying themselves immensely.