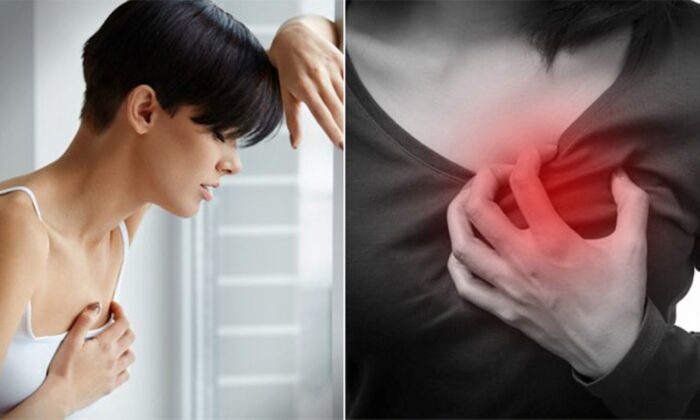 Don’t Ignore These Breast Cancer Signs & Symptoms—If You Have 1 or More, Do See Your Doctor

If you’re a woman, there’s a roughly one-in-eight chance that you’ll end up with breast cancer during your lifetime. Therefore, it’s more than worth it to know exactly how to detect your risk—no matter what your symptoms may be.

Every year, over 7 million people die from some form of cancer out of over 12 million diagnosed on an annual basis.

Of those millions diagnosed, over 300,000 will be women with breast cancer in the United States alone; that’s one every two minutes. That’s also almost 3 percent of all cancer diagnoses worldwide, making it one of the most common forms of the disease for women.

It’s not quite as common for men but remains lethal for both genders, regardless. An estimated 3,000 men in the United States will be diagnosed with breast cancer each year as well—meaning that early detection is one of the most important things anyone can do for themselves.

Many know that finding irregular lumps in breast tissue is an easy red flag, but few know the other signs and symptoms to look for. That leads to anywhere from 30 to 40 percent of all cancer-related deaths ultimately being preventable. That’s a number that’s far too high.

Here are a few of the things you should watch out for:

Aches and pains in the breast area

It’s easy to get annual breast exams, having a medical professional examine for those telltale lumps. But keep an eye out for other symptoms, too, such as unusual aches or pains—which should be detectable before the lumps show up. Rather than pushing past the discomfort, always schedule a visit to your doctor instead.

The symptoms aren’t always localized to the breast area, either.

Changes in nipples, such as dry, cracked skin or unusual discharge, are a huge warning sign, the National Breast Cancer Foundation says. The symptoms can spread out, though, manifesting as anything from a sore throat and nagging cough to back pain that just won’t go away.

A sign of inflammatory breast cancer, an aggressive form of the disease, a buildup of lymph fluid in the breast can cause swelling, dimpling, or pitted skin, according to MedicalNewsToday, which resembles the surface of an orange and is thus termed by doctors as “peau d‘ orange.”

The sore throat and cough will be noticeably wrong; you won’t mistake this as just a normal cough and cold. That’s because while breast cancer can often spread from the breast to the uterus, more than half of all breast cancer cases that spread out through the body head to the lungs instead. Lung cancer can make it feel impossible to breathe, and the coughing is more severe than just a normal scratchy throat would produce.

Breast cancer can affect lymph nodes in the breast or in surrounding areas. Lymph nodes are small, rounded collections of immune system tissues, which filter fluid and capture cells that can be potentially harmful, such as bacteria, viruses, and cancer cells.

Affected areas can exhibit swelling and appear as firm, small, swollen bumps that are tender to the touch, MedicalNewsToday states. If the cancer spreads, such symptoms will first travel to the underarm, and may also appear under the collarbone.

There is a logical explanation behind pain in the back, as well.

As the breast tumors form, the growths place pressure on the ribs, which then place pressure on the spine. Back pain is always something that should be investigated by a doctor—but if it comes with nipple problems and sore breasts, that’s a big warning sign that the doctor should check for cancer cells.

Skin changes can result from cancer, such as discoloration, sometimes with the appearance of  bruising, redness, purplishness, or even bluish skintones.

If the area was not affected by physical trauma that might result from bruising or if the resulting discoloration does not go away, you should have it looked at by a medical professional.

Sometimes, cancer in the breast area might not appear as a distinct bump or lump but as swelling in the overall breast area, which may cause one breast to appear larger than the other or tightness in the skin area of the breast—although having different-sized breasts is normal, abnormal swelling is one potential indication of cancer.

You may also notice irregular urination, which can seem like a bizarre (and unrelated) symptom. But if it comes with the other warning signs—some or all of them—it’s a sign that hormonal changes from the tumors are wreaking havoc on your body, and it’s time to go get things checked out.

If you don’t catch the warning signs until the cancer is late-stage, the signs may start to change. For some, the early stages may even have no warning signs at all.

Keep an eye out, though, for things like noticeable veins on the chest—similar to what you’d see when pregnant—and painful urination, along with heavy fatigue and unexplained weight loss. You may notice the texture of your skin change, almost feeling like an orange peel, and one breast may grow larger than the other as the tumors grow.

For men, many of the nipple-related symptoms are similar, which should be a huge warning sign. Nipple discharge or a rash, swelling and pain, and lumps are all immediate signs that a doctor needs to check things out. For both genders, also keep an eye out for nipples turning inward; that’s a warning sign as well.

Not all forms of breast cancer are deadly. Not all even spread through the body; with some forms, the tumor doesn’t grow or spread, and a cure is relatively fast and easy.

Taking the chance, though, certainly isn’t worth it. Knowing the signs, and keeping an eye out for early intervention, can make a huge difference in the survival rate among women moving forward.