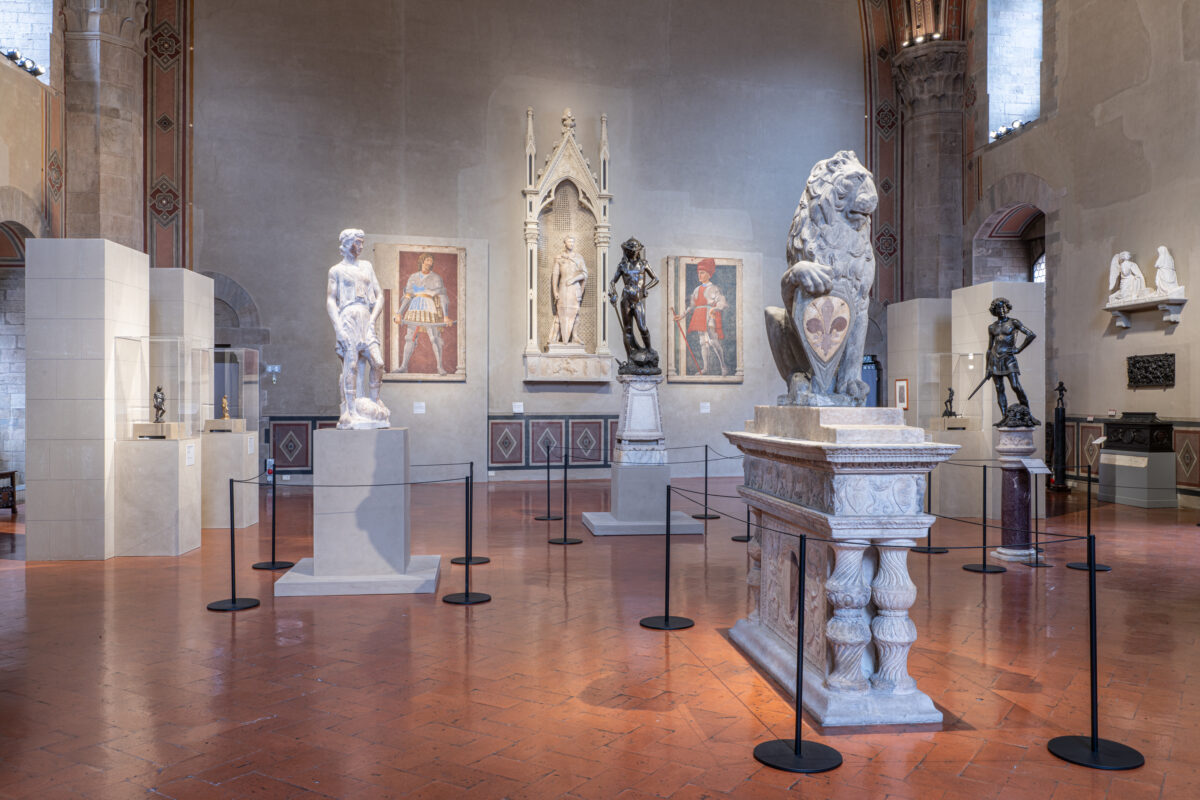 Donatello’s David statues are part of the “Donatello: The Renaissance” exhibition at the Palazzo Strozzi and the Museo Nazionale del Bargello in Florence, Italy. (Ela Bialkowska/OKNO Studio)
Arts & Tradition

Donatello and His Victorious Davids

Italian sculptor Donatello worked at the dawn of the Renaissance. His works epitomize the beauty and ingenuity of the era and set the standard for sculpture from then on.

Donatello sculpted figures full of life. He did so by looking at the classical sculptures of ancient Rome, and by faithfully copying life itself. His sculptures have realistic human features, gestures, and expressions.

Sculptures made so true to nature had never existed before.

Two of Donatello’s statues, made nearly three decades apart, show how the master departed from the graceful Gothic style of his time, full of idealized figures with elongated limbs, to develop his realistic style.

Both sculptures, each called “David Victorious,” show the point of David’s victory over Goliath in the age-old biblical tale of how a young man’s faith and courage achieved the impossible. In both sculptures, Donatello departed from tradition by showing the victorious David as a young shepherd, rather than as a king. In the bronze version of the sculpture, David holds the giant Goliath’s sword after he’d used it to sever Goliath’s head.

Donatello made his marble version of David when he was in his twenties. He’d been commissioned to make the figure for the dome of Florence Cathedral. He used the newfound rules of perspective from his friend, the architect Filippo Brunelleschi, so the figure could be seen accurately from below. But the statue fell too short for it to be placed so high, and it never made it up on the dome.

His bronze David is considered his masterpiece, and it was the first freestanding bronze statue since ancient times. The Medici family is believed to have commissioned the piece as, in the 15th century, David became the symbol of Florence after the city successfully overcame its enemy.

Both Davids stand in contrapposto, a pose from ancient Greek art, when the body’s weight rests on one leg. Sculptures in contrapposto naturally appear as if in motion.

Donatello’s marble David is wearing clothes, some of which are draped, and his fingers and neck are elongated as per the Gothic style. He gazes into the distance, rather detached.

In contrast, Donatello’s bronze David is more dynamic and his face shows real expression. He’s naked, similar to classical art, which was rare. (Medieval artists created nude figures of certain subjects only to show morality, such as when depicting Adam and Eve or souls being banished to hell.) His toned, athletic body reflects his trade as a shepherd boy out in the fields tending his sheep, under the harsh heat of the sun.

Behind his back, he holds one of the rocks he used to bring the giant down—another symbol showing the triumph of faith in the hard-fought battle over tyranny.

On the pedestal of Dontaello’s marble David is inscribed: “To those who fight bravely for the fatherland the gods lend aid even against the most terrible foes.”

Donatello’s David statues are part of the “Donatello: The Renaissance” exhibition at the Palazzo Strozzi and the Museo Nazionale del Bargello in Florence, Italy. The exhibition runs until July 31. To find out more, visit PalazzoStrozzi.org