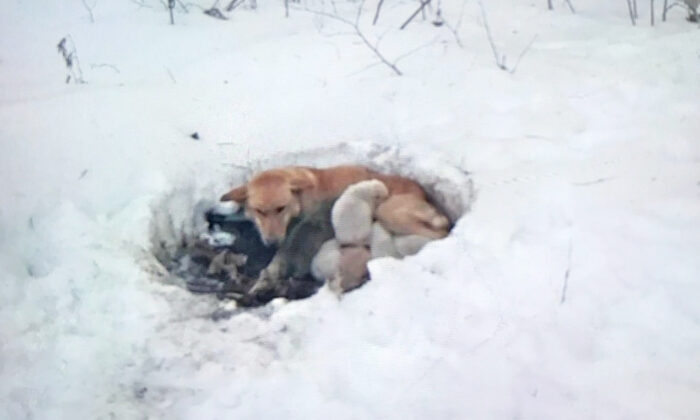 On a cold winter day, a family spotted a stray mama dog curled up with her 3-week-old puppies alone in a snowdrift barely surviving the freezing temperatures in northwestern Minnesota. The concerned family then drove the mama dog and her litter of six puppies to Red Lake Rosie’s Rescue shelter, where they were cared for and have since found forever homes.

The staff at Red Lake Rosie’s Rescue, an animal rescue organization located on the Red Lake Indian Reservation in northwestern Minnesota that has rescued over 10,000 animals, named the mama dog, Snowbelle. They couldn’t believe how Snowbelle and her litter of puppies had survived the harsh weather condition.

According to shelter staff, the puppies were very hungry as Snowbelle had stopped producing milk.

However, not long after, the mama dog and her puppies were nursed back to health. “After a few days of warm shelter and good food Snowbelle started producing lots of milk for her babies,” the shelter wrote in a Facebook post from February 2020.

Since Snowbelle’s heartwarming story was posted on the rescue organization’s Facebook page, it received 1,200 likes and nearly 500 shares. Hundreds of people took to the comments section to express their admiration for the brave mama dog and for the rescue shelter that took them in.

One commentator wrote, “Bless you for all you do. And bless the family who stopped and brought these dogs out of the cold.”

While another commented: “Unbelievable that both the kindness of man and the cruelty of man cross paths. That poor Momma dog and her puppies were so fortunate to have been found.”

Snowbelle had her litter of 6 puppies in a snowdrift this winter. A concerned family drove her and her babies to the Red…

The courageous mama dog, now named Asha, was spayed and then taken to Pet Projects, a rescue in Nerstrand, Minnesota.

Alluding to Asha’s condition, Nancy Bruley, founder of Pet Projects, told The Dodo, “We don’t really know anything about her past.”

“She was very, very thin and in tough shape, so she had been scrounging on her own for a while,” she further added.

According to Bruley, Asha was “extremely shy” and didn’t know how to walk on a leash. However, after six weeks, the timid mama dog transformed and gained weight.

“She’s really blossomed,” Bruley said. “She walks well on the leash now and is much more confident. She jumps and puts her paws up on me. She’s definitely more outgoing than when she came in.”

Fortunately, just like her puppies who were being adopted, Asha too found her forever home.

Sherry Lichstinn, who opened her heart and home to Asha, wrote on Feb. 23 in the comments section on Facebook, “She’s going to be filled with love, hugs, kisses, spoiling and more food and warmth to never go hungry or cold ever again.!!!!!!”

Asha has also made a black labrador her close companion.

“She’s got such a personality,” Lichstinn wrote early this March, updating all those who have followed Asha’s story. “She has learned to eat treats instead of hiding them. She has learned what a bone is.”

From freezing alone with her litter of six puppies in the harsh winter to thriving in her forever home, Asha has indeed come a long way.