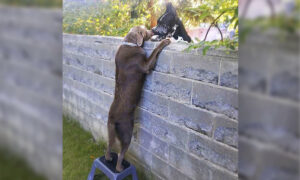 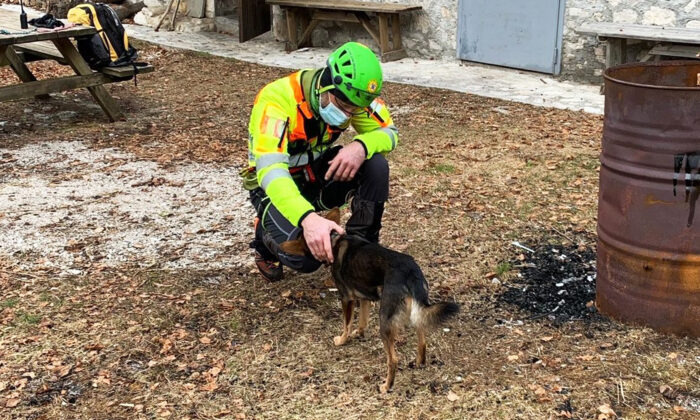 When a hiker slipped and broke his ankle in the remote foothills of the Italian Alps, his loyal canine companion refused to leave his side for seven days and nights in the freezing cold. The hiker credits the mixed-breed pup for saving his life.

The unnamed 33-year-old from Trieste, Italy, was hiking with his dog, Ash, north of Udine at an altitude of nearly 2,300 feet (approx. 700 m) when he slipped, People reported. Immobilized, and without a cellphone signal, he was unable to call for help.

“He claimed that he had slipped several meters into a canal and dragged himself, albeit with a broken ankle and other traumas, as close to the creek water as possible, and that he managed to survive thanks to the company of the doggy.”

The pair spent a week in sub-zero temperatures, using a thermal blanket, leaves, and even a topographic map to protect themselves from the elements. The hiker had originally planned to camp in mountain huts and bivouacs.

He and Ash were reported missing by the hiker’s fiancée on Feb. 15 when they failed to return home on schedule.

The hiker and his loyal pup were spotted near the Tacia Fork by a CNSAS search and rescue team from the air on Feb. 18, when someone noticed the man’s thermal blanket reflecting the light of the sun. The hiker and his dog were soon located approximately 100 meters (approx. 328 feet) from there.

“The man was wounded and badly bruised but conscious, and had the little dog, Ash, next to him,” states CNSAS. The injured hiker was “thirsty and hungry,” but was stabilized by the medical team, wrapped in a depression bag, and winched aboard a Civil Protection rescue helicopter.

Both man and dog were airlifted to safety. CNSAS shared footage of the successful rescue on Facebook.