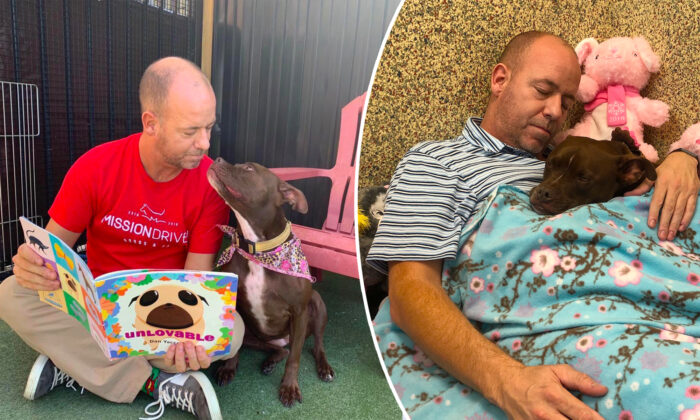 A 3-year-old homeless terrier named Queen was picked up by the Great Plains SPCA after being discovered living in a dumpster on the streets of Kansas City, Missouri.

The gentle, lonely pup was overlooked by potential adopters for over 400 days, but then a shelter volunteer came up with a bright idea. In late 2019, he moved in with Queen to give her a fighting chance at a new life.

Scott Poore had always been a dog lover. “I was very fortunate to grow up in a family that loved pets,” he told The Epoch Times.
“When I left corporate America I started volunteering at Great Plains SPCA, and fostering dogs from there.”

A couple of months into Scott’s volunteer role, he was offered a job at the adoption center. “I worked [there] for the next two years and learned so much about animal rescue,” Scott explained.

The Queen of Hearts

Queen came to Scott’s attention as the longest-staying resident of the shelter’s kennels. Shelter employees had “literally tried everything to get her adopted,” Scott explained, but to no avail; the longer Queen spent in her kennel, alone and without a family to shower her with love, the more withdrawn she grew.

In mid-September of 2019, Scott’s imagination kicked into action. “I knew I had to think outside the box in order to get her the exposure that she deserved,” said Scott, who already has a dog of his own at home, “which is why I came up with the idea to move in the animal shelter with her.”

Scott was unsure, at first, whether or not the shelter staff would allow his incredible yet controversial stunt to take place, but he decided he had nothing to lose. “Thankfully,” he shared, “they said yes.”

Scott and Queen were already firm friends, but in sharing a kennel for seven long days and even longer nights, their relationship blossomed. “I’ve visited Queen almost every day for the past 400 days, so I got to know her really well,” Scott explained. “We became very close friends and I knew I had to help her.”

When asked to describe a typical 24 hours of “kennel life” to The Epoch Times, Scott began: “Kennel life was really hard on me because of the environment, noise, and the amount of people that came to visit us.

“It was very hard on me,” Queen’s biggest advocate continued, “but I knew it was all about Queen, and as the exposure started getting out I decided I would stay there as long as it took to find her a forever home.”

Scott kitted out the kennel with a small desk and chair so that he could continue working while living with Queen. Given the available space, his bed was only 4 feet long, and the ambient temperature in the kennel was around 60 degrees Celsius (140 degrees Fahrenheit). “When the week was over,” Scott explained, “I was happy to get back to my house and sleep in my own bed.”

Scott and his canine companion, however, got on like a house on fire. “My closest friends weren’t very surprised,” said Scott, speaking of the people who watched his plan to help Queen find her forever home unfold.

“I’m always thinking outside the box and doing wild things to help my homeless pet friends find forever homes,” he said, adding, “The people who didn’t know me either thought I was a little crazy or thought it was an amazing idea. I say it’s a combination of both!”

Whether crazy or amazing, or a little of both, after seven long days of bonding, raising visibility, and sleepless nights, Scott’s plan triumphed; Queen, at long last, found a loving, local family to call her own.

“The day that she was adopted was very emotional for me,” Scott recalled, “and I knew that we had to give her a send-off made for a queen, which is why we had all of the staff and volunteers there throwing rose petals in the air.”

“My world is an emotional rollercoaster,” Scott reflected. “I go out of my way every day to make sure the good always outweighs the bad.” Explaining the personal philosophy that keeps him buoyant through the highs and lows of shelter life, Scott continued: “For example, if I do ten things in a day, I make sure six of them are positive and make me happy. It’s my own set of rules.”

Scott was so driven by wanting to make a positive impact that he even started a clothing line, enabling him to devote himself to shelter work full-time. “Mission Driven is a clothing line that I started four years ago,” he said, “because I wanted to volunteer seven days a week; I knew I had to start my own business in order to have a chance at reaching my goal.”

Scott channeled his creativity into a collection of fun pet-related apparel and uses the money generated by sales to fund his animal-rescue work.

“We desperately need more volunteers and have to inspire people to choose adoption over pet stores and breeders,” Scott implored. “I always say that if everyone would spend one day volunteering at an animal shelter, we could save so many lives.”

“Adopt, volunteer, foster, and donate,” is Scott’s advice for anybody wishing to contribute to the solution of the homeless animal crisis. “Just choose one and think of the difference we could make,” he said.

Helping almost 10,000 pets annually, Great Plains SPCA continues to work hard to save, protect, and improve the lives of the animals in their care. Mission Driven apparel is available through Scott’s website.

Queen’s adoption, after over 400 days alone in a shelter kennel, is testament to what can be achieved when animal lovers combine forces and make truly incredible things happen.