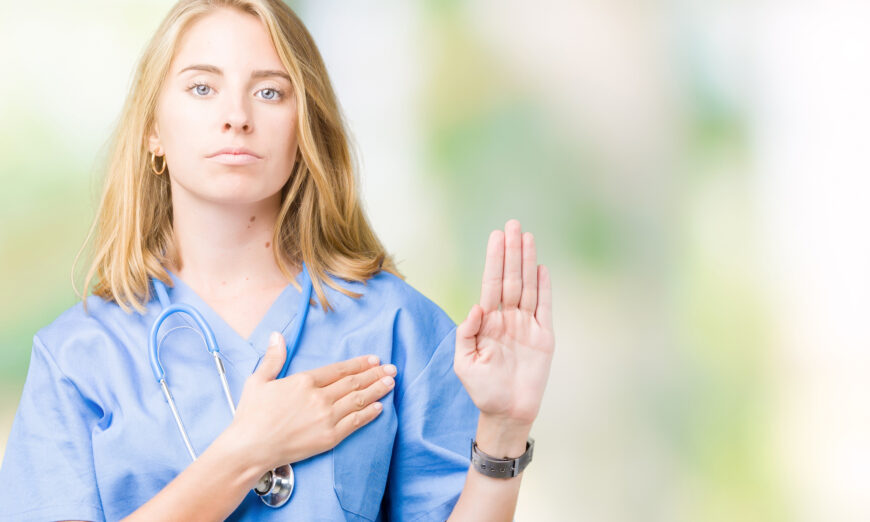 California Gov. Gavin Newsom on Friday signed a bill that subjects the state’s doctors to discipline, including the suspension of their medical licenses, for sharing “misinformation” or “disinformation” about COVID-19 with their patients.

California Gov. Gavin Newsom on Friday signed a bill that subjects the state’s doctors to discipline, including the suspension of their medical licenses, for sharing “misinformation” or “disinformation” about COVID-19 with their patients.

Newsom said the law applies only to physicians’ speech with patients during discussions directly related to COVID-19 treatment.

Language in the bill points out that the Federation of State Medical Boards (FSMB) has warned that physicians who spread misinformation or disinformation “risk losing their medical license, and … have a duty to provide their patients with accurate, science-based information.”

The FSMB, as previously reported by The Defender, takes money from Big Pharma and has a history of challenging and attacking non-pharmaceutical medical approaches used by integrative doctors as falling outside the “standard of care” as they define it.

“Under the new rubric, the doctor no longer serves the best interest of the patient but acts as an agent of state policy.

“History is replete with nightmarish examples of what happens when doctors stop healing and act instead to advance ‘the greater good.’ Governments have variously cited that phrase to justify euthanasia of the elderly, mental defectives, homosexuals and other ‘useless eaters’ and to enforce ‘one-child’ policies.

AB 2098 was introduced in mid-February by California Assemblymember Evan Low — one of seven Democratic lawmakers who in January formed the Vaccine Work Group to develop legislation promoting the use of COVID-19 vaccines while “battling misinformation.”

The American Medical Association (AMA), which strongly supports the bill, hopes other states will follow suit in “ensuring that licensing boards have the authority to take disciplinary action against health professionals for spreading health-related disinformation,” according to a new policy adopted at its mid-June annual meeting aimed at addressing public health “disinformation.”

‘Tool for Enforcing Propaganda and Censorship Policies’ Approved by State

The Defender reached out to numerous physicians who support informed consent and medical freedom.

Here’s what they told us.

“The Golden State has declared its intent with the passage and signing of AB 2098 to effectively muzzle physicians in regards to ‘COVID-speak.’

“Physicians were reticent prior to the passage of this draconian bill to speak on behalf of their patients. With looming threats of loss of livelihood, it is unlikely that any physician will speak out at this juncture. For those physicians still willing to throw down the gauntlet, a mass exodus from California will likely ensue …

“But the largest concern is regarding our children. Parents will not be able to depend on medical professionals and need to protect their own children against ill-advised experimental therapies. This bill will not only remove healthy discourse but will further divide our communities.”

“In a rapidly evolving pandemic resulting from a new virus … there is all the more reason to insist on the passage of time before codifying prevailing norms into enforceable policies. …

“Throughout the pandemic, contrarian scientific voices have been subjected to censure and censorship. However, often these very perspectives were later proven to be irrefutably true ….

“Informed consent requires the discussion of risks, benefits and alternatives to any medical intervention. CA AB 2098 enables medical board disciplinary action for perspectives that challenges the accuracy and thoroughness of CDC [Centers for Disease Control and Prevention] and FDA [U.S. Food and Drug Administraton] safety monitoring. That itself will cause patient harm.

“Science demands open and transparent debate. Throughout the history of modern medicine there are numerous examples in which the contrarian view led to advances in knowledge and in reassessing product post-market safety.

“CA AB 2098 is the wrong approach to improving trust in public health and maximizing adoption of rational, risk-stratified, evidence-based mitigation efforts during a pandemic that indubitably caused tremendous morbidity and mortality.”

“I am despondent that AB 2098 is now law. ‘Misinformation’ is not defined. Scientific truth evolves over time — what is labeled as today’s misinformation may be tomorrow’s ingenious breakthrough.

“I worry that excellent physicians who discuss early treatments for COVID or weigh risks versus benefits of the jabs will flee the state.”

“This bill will primarily act as a strong incentive for all independent-thinking physicians and other medical care providers to migrate their practices to other states.

“It creates yet another social engineering policy that will be weaponized by any person with an axe to grind against any physician or medical provider in the state by filing accusations, which will then have to be investigated and litigated, functionally creating a medical Stasi.

“This is clearly a tool for enforcing propaganda and censorship policies approved by the state of California.”

“As a medical expert treating patients with COVID-19 and vaccine injury syndromes, I anticipate AB 2098 will cause physicians to retract from treating such patients.

“AB 2098 makes it impossible for healthcare providers to have honest and fully informed conversations about the rapidly evolving pandemic and the health problems it has brought to Californians.

“This new law hurts the most vulnerable at a time when they need their physicians to be honest and forthright.

“California is on a slippery slope of medical totalitarianism.”

“I am not surprised by the passage of AB 2098. Our authorities have been hinting at making this kind of move for two years, from the time sufficient evidence of the effectiveness of early treatment was dismissed and suppressed in 2020.

“The Newsom administration fails to see that the passage of this bill into law will deliver a potentially fatal blow to our public health agencies’ already plummeting credibility.

“It’s obvious that this bill was proposed and codified into law because the number of physicians in California that are spreading ‘misinformation’ is rapidly growing.

“This is a desperate attempt to squelch scientific debate, and it will eventually backfire. It’s only a matter of time before California physicians will see this as an unjust attack on their colleagues and the medical profession as a whole.”

“Clearly it is of the utmost importance to the newest world order that all challenges to the public health COVID narrative be destroyed.

“Doctors, who have authority to speak about such things, must be made to speak in one voice. But the practice of medicine is regulated at the state level, not at the federal level. So doctors must be controlled by the states.

“For patients who want the right to obtain honest information from their physicians and want to have choices regarding their medical treatment, now is the time to speak up. The screws are tightening. This could be your last chance.”