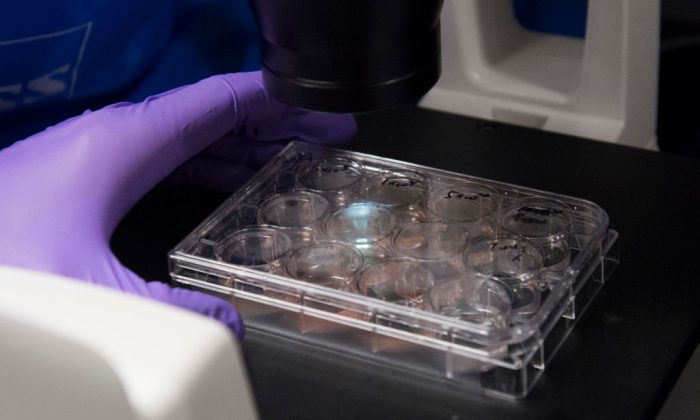 Dr. Benjamin Jin, a biologist working on immunotherapy for HPV+ cancers, works in the lab of Dr. Christian Hinrichs, an investigator at the National Cancer Institute at the National Institutes of Health (NIH) in Bethesda, Md., Feb. 7, 2018. (SAaul Loeb/AFP/Getty Images)
Health News

An Ohio mother’s cancer vanished after a clinical trial, according to her doctors.

Denise Keenan, 66, of Youngstown, was diagnosed with non-Hodgkin’s lymphoma in 2009.

Keenan went in and out remission several times over the past decade but it always came back.

In August, though, doctors informed her that the CAR T-cell clinical trial that she underwent was successful.

Keenan was the first patient for the trial at Seidman Cancer Center at University Hospitals, which is the first in the nation to engage in the trial.

CAR T-cell Therapy is a “type of treatment in which a patient’s T-cells (a type of immune system cell) are changed in the laboratory so they will attack cancer cells,” according to the National Cancer Institute.

The hospital calls it harnessing the power of the body’s immune system to fight cancer.

Just a month after starting the trial, Keenan’s cancer disappeared.

She said that she’s aware the cancer could return again but is optimistic about the future.

“The jury’s still out as far as how long this is gonna last because they just don’t have a lot of long-term data,” she told WJW. “The future is unknown so just enjoy the moment. I think you’re a lot happier if you can do that.”

Doctors at the Seidman Cancer Center at University Hospitals are hopeful the trial treatment can knock out cancer, saying it has big potential.

“CAR T-cell therapy has a huge potential to cure leukemias and lymphomas,” Dr. Marcos de Lima, director of Hematologic Malignancies and Stem Cell Transplant Program, said in a blog post. “It’s not a widespread application yet, but the potential is huge.”

He imagines a day, after the science progresses, that cancer patients are prescribed generic CAR T-cells, just like they get a wide range of prescriptions now.

“We’d love to have an off-the-shelf product, and we are working towards that end result,” De Lima said.

“Immunotherapy doesn’t help everybody, but researchers are always looking for new drug combinations and weaknesses in cancer cells that can be targeted so that, one day, everyone with cancer will benefit.”

“I expect future CAR T-cell therapy products to target multiple molecules: two, three or even more different molecules on a particular tumor. That would allow CAR T-cells to still recognize the cancer, even if one target molecule disappears,” he said in an interview posted on the hospital’s website.

“Eventually, the hope is that CAR T-cell therapy could replace chemotherapy and stem cell transplants altogether. But first, we have to show that it’s at least as effective—or more effective—than those therapies. This is a major breakthrough in the way we treat B-cell lymphoma and leukemia. And it’s offering hope to people who’d previously been given only about six months to live.”