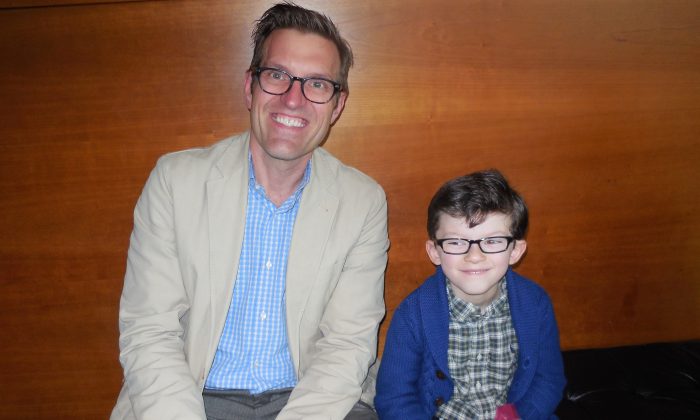 Dr. Brad Berg and his son at the Long Center for the Performing Arts on Dec. 27, 2014. (Stacy Chen/Epoch Times)

AUSTIN, Texas—Shen Yun Performing Arts entered the second day of its 2015 world tour on Dec. 27 with performances in Austin and Fort Lauderdale in the U.S. and Hamilton in Canada.

Brad Berg, a paediatrician and medical director at McLane Children’s Baylor Scott & White in Round Rock, said he highly enjoyed the afternoon performance at Austin’s Long Center for the Performing Arts.

Gesturing toward his son who accompanied him to the performance, he said the performance offers good educational value as it “brings the past to life, preserving the culture.”

According to Shen Yun’s website, the mission of the New York-based classical Chinese dance and music company is to revive China’s divinely inspired culture.

Dr. Berg said he also enjoyed seeing the spiritual side of Chinese culture through the performance.

“It is a great performance to come to—lots of colors, lots of energy, just very well done.”

‘The choreography is amazing’

Also attending the performance was Dr. Paul Foster and his parents.

“The choreography is amazing,” he said. “The athleticism of the dancers is impressive.”

Dr. Foster said he was also impressed by the wide array of colors and the hundreds of handmade costumes in Shen Yun.

“The work that had to have gone into this is astounding. It’s beautiful, it’s really fun to see.”