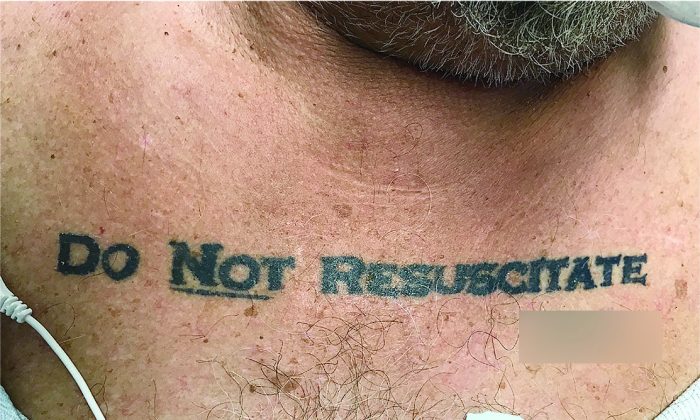 Doctors faced an ethical dilemma when they discovered a dying man with "do not resuscitate" tattooed on his chest. (The New England Journal of Medicine ©2017)
US News

Doctors were faced with an ethical dilemma when a 70-year-old man was wheeled into their hospital with the words “do not resuscitate” tattooed on his chest.

Medical staff found that the man had a high blood alcohol level and no identification, according to The New England Journal of Medicine.

The patient was brought to Miami University Hospital where doctors discovered the DNR request tattooed on his chest with the word “not” underlined.

Doctors also reportedly found the patient’s signature underneath the tattooed request, although this is masked in the image of the patient’s chest.

The medical staff had no way to contact the patient’s next-of-kin. With a dying man in front of them, they initially chose to ignore his tattoo—in case it did not reflect his genuine wishes.

Then, after consulting with the hospital’s ethics consultants, the doctors decided to honor the tattoo.

The authors of the article published in the journal wrote: “We initially decided not to honor the tattoo, invoking the principle of not choosing an irreversible path when faced with uncertainty.

“This decision left us conflicted owing to the patient’s extraordinary effort to make his presumed advance directive known.”

The lead author of the case study, Dr. Gregory Holt, told Gizmodo, “Florida has stringent rules on this.”

He said to the website that the biggest concern was whether the decision was legally acceptable.

“It has to be on yellow paper, both the doctor and the patient have to have signed it … it doesn’t say anything about tattoos,” Dr. Holt told the Daily Mail.

A couple of hours later, the team found a DNR order—legal documentation that showed the tattoo did reflect the man’s wishes.

The patient deteriorated in the night and the doctors let him go.

“It’s a concern for both physicians and patients,” Dr. Holt told the Mail.

“You want to do right by someone and if you don’t know, you do everything you can think of because we always pick the reversible choice, not the one you can’t take back when faced with uncertainty,” he said.

Please support our independent journalism by sharing this article on your social networks. Thank you.