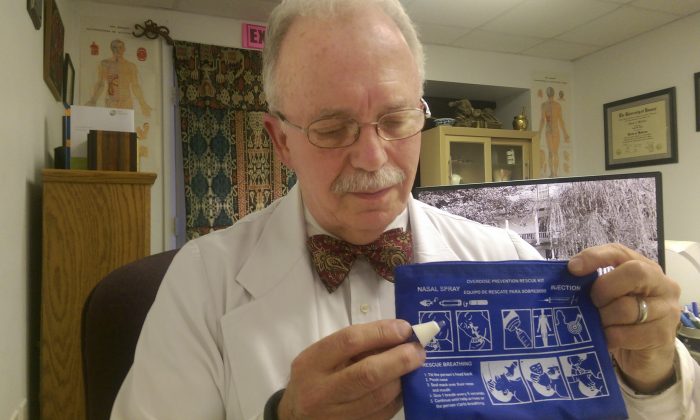 Dr. John Aldis holds a noloxone nasal spray kit with the instruction sheet in Martinsburg, W.Va., on Nov. 3, 2015. Aldis trains people so that they can administer noloxone to an individual who’s having a heroin overdose. (Jenni Vincent/The Journal via AP)
Health

Doctor Taking Opioid Overdose Problem Into His Own Hands

MARTINSBURG, W.Va.—Dr. John Aldis had no way of knowing when he graduated from medical school 44 years ago that something else from that same time—the federal Food and Drug Administration’s approval of the naloxone, a medication that reverses opiate overdoses—would become an important part of his practice.

However, Aldis, who works with the New Life Clinic, now voluntarily spends his own money and time to educate others about how to use this medicine, also known by its brand name Narcan, to treat overdoses including what might otherwise be fatal heroin overdoses.

He also sees patients at Callahan Counseling Services, where owner Peter Callahan allows him to hold his training session each Friday beginning at 6 p.m. Two meetings have been attended by more than two dozen people, and they listen to a lecture before being given a prescription for naloxone and a nasal administration kit that’s needed to give someone the medicine, Aldis said.

Interested individuals can sign up for the class by calling the receptionist at Callahan Counseling Services at 304-886-4118.

“I found the best way to approach this was to just start doing it—to start offering a class to get this into the hands of people who need it the most. Build it and they will come is my philosophy,” he said.

“And it turns out there is a large group of intensely interested people who want to have naloxone available to them,” Aldis said, adding that not everyone who attended was one of his patients.

It’s already having an impact, because two of the individuals who’ve participated in his training classes have saved the lives of two heroin addicts, he said.

One woman was pregnant, while the other was saved after collapsing in the driveway of an individual who’d attended his class, Aldis said.

An opioid antagonist, naloxone can be used to counter the effects of an overdose of heroin, morphine or other opioid prescription drugs if it is administered in time, he said.

High doses of opioids, such as heroin, can cause reduce lung function and slow, shallow breathing—even respiratory depression that can be life threatening, Aldis said.

“Naloxone is used to treat respiratory depression cause by opioids. Opioids produce their effects by acting on opioid receptors in the brain and nervous system. Naloxone works by blocking these opioid receptors, thus stopping opioids from acting on them. This reverses the effects of the opioid,” he said.

Flakka: New Scary Street Drug Emerging in NYC; What Is It Made Of?

Getting naloxone into the hands of people who have frequent encounters with heroin addicts is especially important locally given Berkeley County’s heroin epidemic, he said.

The time is also right since state law which formerly allowed only EMS personnel to administer naloxone in these types of situations has changed so that others, including police, firefighters and other emergency responders as well as family members of drug addicts can carry it, Aldis said.

Government officials at both the federal and state level had advocated for this change, including Gov. Earl Ray Tomblin who said at last week’s Substance Abuse Summit that he considers this legislation an important part of his administration’s effort to win the war on drugs.

After being passed during the 2015 legislative session, Tomblin signed the bill into law on March 19, and it took effect May 27.

Numbers don’t lie, but they do tell a deadly tale about West Virginia’s growing drug problem.

The Trust for America’s Health reported in 2013 that the state had the highest drug overdose mortality rate in the country. It placed the state’s overdose deaths at 33.5 per 100,000 and that was considered the worst in the nation.

Statistics show that the number of people dying from an overdose in West Virginia increased from 360 in 2009 to 460 in 2013.

This epidemic has also captured President Barack Obama’s attention, so much so that he traveled to Charleston last month to hold a community meeting that included families of recovered addicts, law enforcement, health, and education officials.

His visit came on the heels of his administration’s proposed $133 million in new spending to curb overprescribing of pain prescriptions by doctors, to increase the amount of overdose data being collected and expand access to naloxone.

As proposed, Obama’s plan doubles the number of providers that can prescribe naloxone.

Aldis has no plans to discontinue his Friday sessions, and they are still open to the public.

There is no charge for participating in the program, although a “$10 donation to cover the cost of the nasal administration kit will be appreciated, but is not necessary as we have extra kits for individuals who cannot give that donation,” Aldis said.

In other words, Aldis is footing the bill for this public outreach and education by having already spent roughly $1,000 on providing these naloxone kits.

As time goes on, he’d like to see even wider participation and hopefully other area doctors will take a similar interest in making naloxone more available locally.

Addiction is a disease, he said, and those who suffer from it deserve treatment.

“It’s really no different in that regard from heart disease. If a person has a heart attack in front of you, you are going to do CPR. This is CPR for addiction, for heroin overdose,” Aldis said.

“You’re not preventing that person from being a heroin addict, just the same as you’re not healing someone from heart disease. But when someone is overdosing right in front of you, and is clinically dead, there’s no time to wait so you have to do something to change that around,” he said.

“And what if this is some woman’s kid? Doesn’t that mother have the right to save her son or daughter? We have the drug, and it is available because the legislature also saw the need for moving ahead to help save opioid addicts,” Aldis said.

Sadly, other essential elements of addiction treatment are lacking locally and that means addicts are being revived with little hope of having anywhere to go to get the rest of the treatment needed to move past the drug use, he said.

“I know that too, and that there aren’t any easy answers here. But first, it the guy is dead, let’s do something,” Aldis said.

Herb Linn, who works with the West Virginia University Injury Control Research Center in Morgantown, said he is excited about Aldis’ professional efforts and hopes others in the state will follow his lead.

It’s also groundbreaking work since it may represent the first time this kind of public involvement has been used directly to save a life since the law was changed allowing an addicts’ family members and friends to administer naloxone during an overdose, Linn said in an email.

“The young pregnant woman whose life was saved on Sept. 11 by the administration of naloxone is significant, because it may represent the first lives saved in West Virginia through a state doctor prescribing naloxone directly to drug users and their family members, peers and caregivers,” his email reads.

“It is impressive that Dr. Aldis has put in place the first such ‘take-home naloxone’ program in the state a type of program that was authorized by the recently enacted Senate Bill 335,” it concludes.