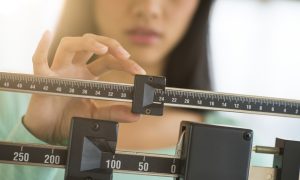 Eat Healthy and Exercise But Still Gain Weight? If So, It Might Be Your Thyroid
0
Share Now
TelegramFacebookTweetEmailTellMeWeReddit
Copy Link 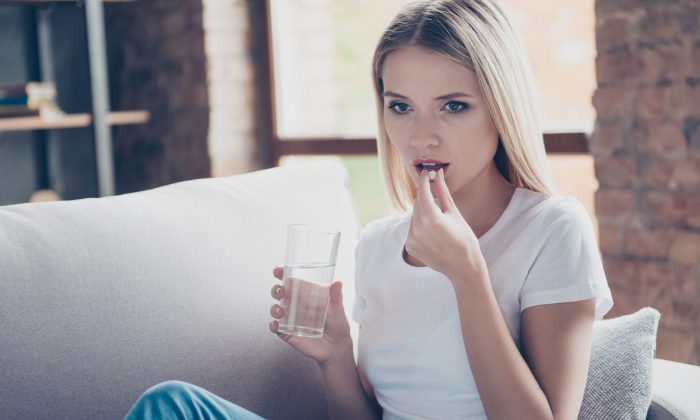 Women are especially susceptable to an underperforming thyroid, which can lead to them being treated for depression that can result from the condition. (Roman Samborsky/Shutterstock)
Lifestyle

If you walk into a doctor’s office and tell a conventional doctor that you’re depressed, gaining weight, fatigued, having trouble concentrating, cold, and constipated, chances are that the doctor would tell you that it’s depression, aging, or just stress, and that’s why you’re feeling the way you do.

They might prescribe you some medication and off you go.

But one thing that the doctor might fail to realize is that those very symptoms of depression also double as symptoms of a commonly underdiagnosed condition: hypothyroidism.

An underperforming thyroid (hypothyroidism) is one of the most underdiagnosed conditions in America, yet it’s incredibly common—especially in women. Over 20 percent of all women have a “lazy” thyroid, but only half of those women are diagnosed.

Science has known about the relationship between a dysfunctional thyroid and symptoms of depression for a long time. Depression often occurs concurrently with changes in the hypothalamic-pituitary-thyroid axis, which is a hormonal feedback control loop that regulates metabolism.

So exactly how many patients are told they have depression when it’s really a thyroid problem? A new study published in the peer-reviewed journal BMC Psychiatry is shedding a bit of light onto that question.

In a 2019 study, researchers from several Malaysian universities used a meta-analysis technique to evaluate the association between subclinical hypothyroidism—meaning hypothyroidism that is not severe enough to present definite observable symptoms—and depression amongst 12,315 individuals. The researchers were hoping to further clarify the prevalence of depression among people with subclinical hypothyroidism (SCH) and the effect of levothyroxine therapy, the most common synthetic thyroid hormone drug that is sold under the brand names of Synthroid, Tirosint, Levoxyl, Unithroid, and Levo-T.

What does that mean? The researchers found that thyroid imbalance seems to be a driver of depression—and that trying to replace those missing hormones with the most commonly prescribed synthetic T4 hormone, levothyroxine, doesn’t actually help alleviate depressive symptoms.

This is an interesting finding because about 20 million Americans, mostly women, have some type of thyroid problem and are prescribed synthetic thyroid hormones such as Synthroid, a brand of the levothyroxine. Instead of using synthetic chemicals to “fix” our bodies, which apparently isn’t really working, we should be finding the root cause of the thyroid dysfunction and take a more holistic approach in healing our bodies.

To better understand why this study was interesting, we first need to understand more about the thyroid in general. The thyroid is a butterfly-shaped gland that sits at your throat just a little under the Adam’s apple. The gland produces a range of hormones, but its two most active substances are T3, the active form of thyroid hormone, and T4, the storage form of thyroid hormone.

A healthy thyroid regularly secretes T3 and T4 into the bloodstream so that most of the T4 can be converted into its active form, T3, around the body, including the brain. To do that, the process depends on a wide variety of factors: the amount of available specialized enzymes, optimal cortisol (your stress hormone) levels, and certain nutrients such as iron, iodine, zinc, magnesium, selenium, B vitamins, vitamin C, and vitamin D.

But thyroids do much more than pump out hormones; they also take information in from the body to adjust its own pace. The thyroid sits in the middle of a complex and dynamic web of hormones and chemicals that controls metabolism, which is how fast and efficiently cells can convert nutrients into energy. In conversation with the brain, adrenal glands, and more, the thyroid indirectly affects every cell, tissue, and organ in the body—from muscles, bones, and skin to the digestive tract, heart, and brain.

One major way that thyroids affect us is through our mitochondria, the organelles in most cells that are widely considered to be the powerhouses of the cell. Mitochondria not only help generate energy for our body to do things, but they also determine the time of cell death and more.

Our mitochondria are maintained by our thyroid hormone—which is why patients whose thyroids are underperforming experience an array of symptoms, including fatigue, constipation, hair loss, depression, foggy thinking, cold body temperature, low metabolism, and muscle aches. That’s partially why thyroid problems have such resounding and far-reaching effects on the body. When your mitochondria aren’t being properly cared for by your thyroid hormone, everything in your body has less energy to do the work it needs to do, and everything slows down.

What Makes the Thyroid Misbehave?

It’s no surprise that so many factors go into keeping the thyroid happy. The thyroid can be thrown off balance by all sorts of reasons: chemicals and food additives, like emulsifiers (found in commercial soda), synthetic plastic chemicals, fluoride (found in much of our tap water), and mercury (from large fish), or immune responses. Importantly, this circuitry is also influenced by another hormone, cortisol, which is produced by your adrenal glands at the command of your brain.

When we look at adrenal function, we have to take our analyses one step farther and understand what is causing adrenals to be stressed out.  From there, we know that the adrenal glands are affected by the gut, diet, and environmental immune provocation and that many lifestyle and environmental factors can influence this relationship, which in turn, can disturb the thyroid.

Thyroid Disease Is a Psychiatric Pretender

The point of all of this is to say that because of how interconnected the relationship between the thyroid and other parts of the body are, thyroid imbalance often leads to the symptoms of depression, when the culprit is an unhappy thyroid. The study that we talked about earlier is helping us better understand just how prevalent mistaking thyroid imbalance, particularly subclinical hypothyroidism, for depression is.

Of course, it doesn’t help that symptoms listed above are a vague bunch and could have many causes, so conventional doctors frequently write them off as a symptom of aging, depression, or stress in the few minutes they usually spend talking with patients. The way that lab tests for hypothyroidism (both subclinical and hypothyroidism) are run and the way reference ranges are established aren’t very accurate.

Keeping a thyroid healthy is an exercise in holistic medicine that requires you to pay attention to all aspects of your lifestyle. Check out our free symptom checker at KellyBroganMD.com to see if your thyroid might be affected, or if you have any of the other Top 5 “Psychiatric Pretenders” common physical imbalances that show up as mental or emotional symptoms.

Kelly Brogan, MD, is a holistic women’s health psychiatrist and author of The New York Times bestselling book, “A Mind of Your Own, the children’s book ” A Time for Rain,” and co-editor of the landmark textbook, “Integrative Therapies for Depression.” This work is reproduced and distributed with the permission of Kelly Brogan, MD. For more articles, sign up for the newsletter at KellyBroganMD.com