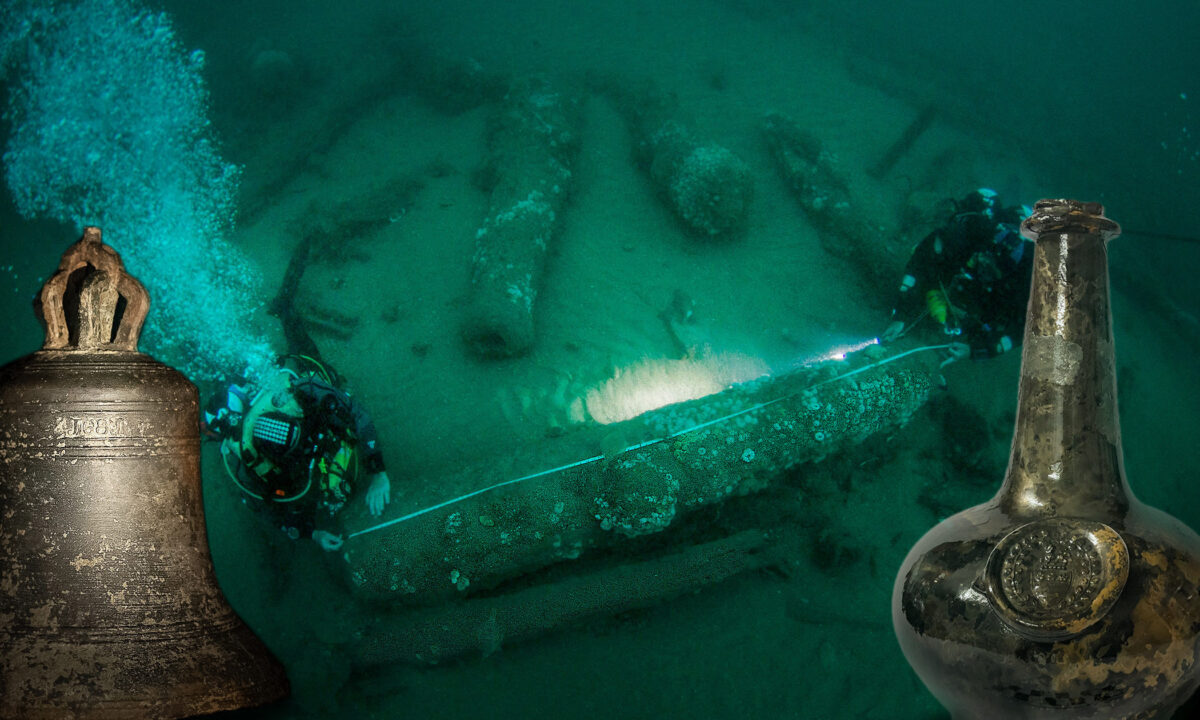 A prestigious English shipwreck was discovered by a pair of brothers 28 miles off the coast of Norfolk. It’s a ship whose sinking could have quite literally changed the course of British history.

The brothers, Julian and Lincoln Barnwell, spent decades diving and exploring World War I and II shipwrecks; but later set their sights on a new challenge, one that took four years to complete: to find the 17th-century warship the Gloucester, which sank carrying the Duke of York and Albany, James Stuart, Britain’s then future king.

Amidst white sand, sunshine, and perfect visibility one fine day in 2007, beneath the waves, they spotted cannons.

The find would also yield countless more artifacts, including the personal possessions of possibly hundreds of passengers who drowned, wine bottles, and a bell which helped identify the vessel.

“Because of the circumstances of its sinking, this can be claimed as the single most significant historic maritime discovery since the raising of the Mary Rose in 1982,” said maritime history expert Professor Claire Jowitt, of the University of East Anglia (UEA). “The discovery promises to fundamentally change understanding of 17th-century social, maritime, and political history.

“It is an outstanding example of underwater cultural heritage of national and international importance. A tragedy of considerable proportions in terms of loss of life, both privileged and ordinary, the full story of the Gloucester’s last voyage and the impact of its aftermath needs re-telling, including its cultural and political importance, and legacy. We will also try to establish who else died and tell their stories, as the identities of a fraction of the victims are currently known.”

The warship sank during a time of particular historical significance when political and religious turmoil and division plagued the nation. It was a critical juncture in Britain, leading up to a transfer of power from the monarchy to parliament during the nation’s “Glorious Revolution” in 1688. Aboard Gloucester was the future King James II of England and Ireland (James VII of Scotland). Had he drowned, British history would have looked much different.

The ship’s sinking, at the time, was submitted by critics as evidence of James’s unfitness to be king. He was later to be removed and replaced by his daughter, Mary, and her husband, William of Orange, who then assumed the throne.

The Gloucester, commissioned in 1652, was chosen to be James’s vessel on a voyage to Edinburgh to collect his wife, then heavily pregnant, and their households. The object was to bring them back to London to King Charles II’s court in time, it was hoped, for the birth of a legitimate male heir.

Setting sail from Portsmouth, the warship rendezvoused with James and his entourage, who had traveled by yacht from London, at Margate. Along the journey, so the story goes, James and the pilot had a dispute as to what the ship’s proper course should be while navigating the treacherous Norfolk sandbanks.

Then, at 5:30 a.m., on May 6, 1682, the Gloucester ran aground 28 miles off the coast of Great Yarmouth. The vessel split down the keel and within an hour sank, resulting in the loss of 130 to 250 passengers and crew. James reportedly refused to abandon ship until the last minute, for which he was blamed, as others could not leave until he did. But he was rescued aboard one of the Gloucester’s small boats with his close friend John Churchill, later the first duke of Marlborough.

Passengers of both high and low caste perished, though no human remains have yet been recovered. As there was almost no time to collect the ship’s cargo and personal belongings, the wreckage today remains rife with artifacts as well as insights into how people lived in those times.

After the discovery, the Barnwell brothers undertook an underwater archaeology course with the Nautical Archaeology Society.

Among the items rescued from the wreck were clothes, shoes, professional naval equipment, personal possessions, and many wine bottles. Some were found sealed and still filled with wine, offering possibility for further research. One wine bottle bears a glass seal with iconography linking it to Colonel George Legge, the son of Elizabeth Washington.

The Washington family crest depicted on the bottle, a shield design bearing stars and stripes, links it and the ship with perhaps the most famous Washington in that line: America’s first president, George Washington.

And a bell found aboard the Gloucester enabled researchers in 2012 to positively identify the vessel.

Due to the time required to determine the ship’s identity, and the fact that it was discovered in an “at risk” site in international waters, only now is it being made public. Though its exact location is withheld, the site was declared to the UK’s Receiver of Wreck, Historic England, and Ministry of Defence.

“When we decided to search for the Gloucester, we had no idea how significant she was in history,” Julian told the UEA. “We had read that the Duke of York was onboard but that was it. We were confident it was the Gloucester, but there are other wreck sites out there with cannons, so it still needed to be confirmed.

“There is still a huge amount of knowledge to be gained from the wreck, which will benefit Norfolk and the nation. We hope this discovery and the stories that are uncovered will inform and inspire future generations.”

The shipwreck’s artifacts will be displayed in spring 2023 in an exhibition called “The Last Voyage of the Gloucester: Norfolk’s Royal Shipwreck,” jointly curated by UEA and Norfolk Museums Service, at the Norwich Castle Museum & Art Gallery, where the discoveries will be staged for five months, from February to July 2023.