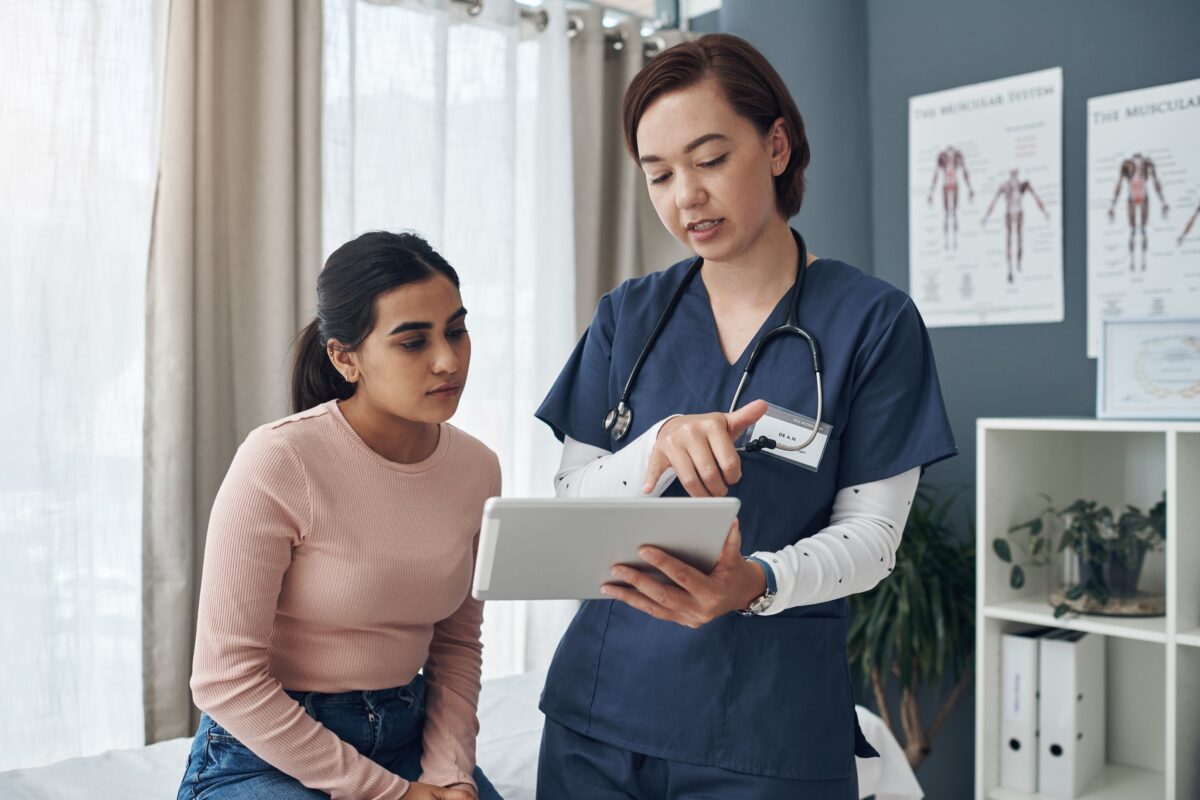 Each year, tens of thousands of women have unnecessary hysterectomies—many without even being told other treatments are available.(PeopleImages.com - Yuri A/Shutterstock)
Women's Health

Did You Need That Hysterectomy?

Nearly 40 percent of these surgeries may not be necessary
BY Jennifer Margulis TIMEJuly 16, 2022 PRINT

While Cesarean delivery remains the most common surgical procedure among women of reproductive age, hysterectomy isn’t far behind, according to Johns Hopkins Medicine. The second most common surgery for women of childbearing age, hysterectomy involves the surgical removal of the womb. It can be performed using three different techniques: vaginal, abdominal, and laparoscopic.

According to the National Women’s Health Network, approximately 600,000 hysterectomies are performed each year.

In fact, about “one-third of American women will have had a hysterectomy by the age of 60,” states Brigham and Women’s Hospital.

However, Dr. Jennifer Lang, an obstetrician-gynecologist and gynecological oncologist based in Los Angeles, believes hysterectomies are over-performed.

“I consider removing this particular organ as a very radical and extreme act that should be only proceeded with after a thorough review and trial of every other less extreme option that is out there,” Lang, who sees the uterus as a sacred organ that plays a spiritual role in a woman’s life, told The Epoch Times.

When nonmalignant tumors cause heavy bleeding and pelvic pain, doctors will often recommend a hysterectomy. Without a uterus, a woman no longer experiences painful periods.

Endometriosis is a condition in which uterine tissue extends outside of the uterine walls and attaches to the ovaries, intestines, or fallopian tubes. This can cause severe bleeding and pelvic pain.

Uterine prolapse occurs when the uterus falls out of its normal position due to the weakening of the ligaments. A woman who has a prolapsed uterus often feels pressure in her lower abdomen and may not be able to fully empty her bladder.

In a 2016 study conducted by Duke Cancer Institute, scientists observed that women with the BRCA1 gene were specifically at risk for uterine carcinomas.

Some women who have the BRCA gene elect, after a recommendation from their doctor, to get a prophylactic hysterectomy to reduce their likelihood of developing cancer.

While you may think hysterectomies—like mastectomies—are mostly performed to prevent or treat cancer, only 10 percent of hysterectomies are to treat cervical, endometrial, or ovarian cancer, according to Johns Hopkins Medicine.

The hysterectomy procedure dates all the way to the Middle Ages when it was done in a more barbaric and dangerous way than it is today. They were previously conducted to remove a prolapsed uterus.

Early hysterectomies were performed without anesthesia.

The mortality rate was around 70 percent, according to the journal Clinical Obstetrics and Gynaecology. Women who were lucky enough to survive the operation often died shortly afterward from complications, which ranged from inflammation of the abdominal wall, hemorrhage, and sepsis.

Hysterectomies became safer in the 20th century as the complications decreased with the invention of anesthesia and antibiotics.

The current mortality rate from a hysterectomy is thought to be less than 1 percent, according to the National Women’s Health Network. While this may seem reassuring, with 600,000 hysterectomies performed a year in the United States, these numbers suggest that thousands of women die from these operations every year.

A hysterectomy is surgical menopause. Pregnancy isn’t possible afterward, and most women need to take hormones for the rest of their lives. That has been an ongoing source of sadness for my friend whom we’ll call Anna. Anna felt she wasn’t adequately counseled by the surgeon who removed her womb. Now, in her early 50s, she and her partner are trying to have a baby via surrogacy using donor eggs.

Complications are possible with any type of major surgery. Some of the short-term risks from getting a hysterectomy, according to Stanford Health Care, include allergic reaction to anesthesia, blood clots, blood loss, damage to surrounding organs, and infection.

Dr. Shannon Laughlin-Tommaso, an obstetrician-gynecologist who works at the Mayo Clinic in Rochester, Minnesota, conducted a longitudinal study for more than 20 years. She analyzed more than 2,000 women who had a hysterectomy for benign gynecological diseases.

That study, published in 2018, found that women who had hysterectomies were at increased risk for hypertension, high cholesterol, obesity, and even cardiac abnormalities.

The same sample of women was also analyzed in a separate longitudinal study published in 2019 in the peer-reviewed journal Menopause. Women post-hysterectomy, researchers discovered, were at an increased risk for anxiety and depression.

The risk of depression was even higher for women who underwent a hysterectomy between the ages of 18 and 35.

Laughlin-Tommaso is critical of the procedure. “Because women often get a hysterectomy at a young age, knowing the risks associated with the procedure even years later is important,” she told a reporter for the Mayo Clinic. “Our study shows that removing the uterus may have more effect on physical and mental health than previously thought.”

In 2021, the FDA approved the Hominis Surgical System, a “new robotically-assisted surgical device (RASD) that can help facilitate transvaginal hysterectomy in certain patients.” Because it enables surgeons to perform hysterectomies remotely, without needing to touch the patient, RASD has become an even more common method during COVID, according to Nature Machine Intelligence.

This technique surgeons to use computer-generated software to maneuver surgical instruments through tiny incisions in the patient’s body to remove the uterus through the vagina, rather than through the abdomen. A video camera is inserted laparoscopically through a small incision in the abdomen so that the instruments inside the patient are visible.

Should You Trust the Robot?

In 2021, the FDA conducted a clinical study of 30 patients undergoing transvaginal hysterectomy using the Hominis Surgical System to test its safety and effectiveness.

Patients ranged in age from 37 to 79 years old. More than half had comorbidities, including high cholesterol, hypertension, and osteoporosis.

According to the FDA, all 30 patients underwent successful hysterectomies via this new technique. Minor complications, such as blood loss and urinary tract infections, occurred.

While this seems promising, the study had several flaws. If the patient’s procedure didn’t have to be converted to a traditional method of hysterectomy, it was considered successful. In addition, study participants were only followed for six weeks after the surgery. Whether they suffered long-term adverse effects is unknown.

But we do know about problems with another robotic hysterectomy method, the da Vinci System, which was cleared for use by the FDA in 2005.

In a 2009 study published in the journal Obstetrics and Gynecology, 510 patients were followed after their procedures were performed with the da Vinci. Twenty-one patients reported dehiscence (opening) of the surgical wound in the vagina. Six of the patient’s bowels prolapsed transvaginally.

A 2018 investigation by NBC found that in a 10-year period there were more than 20,000 adverse events caused by the da Vinci reported to the FDA.

Of those, 17,000 were device malfunctions, including parts of the device falling off into patients’ bodies, and 274 were deaths.

NBC also reported that training programs for surgeons to use the da Vinci weren’t required.

In 2015, Laurie Featherstone received a da Vinci hysterectomy. Weeks after her robotic-assisted operation, excess fluid filled her kidneys. Her ureter and colon had been burned by the device. She will use a colostomy bag for the rest of her life.

Despite her doctor’s reassurance that the robotic technique would lead to fewer complications, Featherstone now lives with permanent health problems.

“I put all my faith in the doctor and didn’t ask questions,” Featherstone told NBC.

Was That Hysterectomy a Necessity?

A 2015 study published in the American Journal of Obstetrics and Gynecology revealed that nearly 40 percent of hysterectomies may not be necessary.

This study analyzed the use of alternative treatments prior to a hysterectomy for women with benign conditions. They examined the medical records of 3,397 women who underwent hysterectomies.

Some of the results were shocking:

If these numbers are correct, of the 600,000 hysterectomized women in the United States, some 120,000 didn’t need the procedure.

It seems women with benign gynecologic conditions aren’t being informed of alternative medical and natural treatments. Many doctors offer hysterectomies to women who may not need them without first considering less invasive methods.

Women with uterine fibroids can get a myomectomy, which surgically removes the fibroid while keeping the uterus intact. The Mayo Clinic describes the procedure as involving the removal of fibroids either through an incision in the abdomen or minimally invasive techniques through the belly button or vagina.

Myolysis is another alternative a woman can receive to treat fibroids. A gonadotropin-releasing hormone agonist is first given to decrease the size of the fibroid. The procedure is then performed by inserting a laser fiber or electrode into the fibroid to shrink it.

Women who experience heavy menstrual bleeding can also try endometrial ablation. This is a less invasive procedure that removes the uterine lining via electricity, fluids, cold, or balloon therapy, among others.

According to the NIH, hormone therapy may also be effective in treating endometriosis without needing a hysterectomy.

Dr. Aviva Romm, an integrative family physician who studied at Yale University, encourages her patients to focus on preventing fibroids in the first place and healing endometriosis naturally.

According to Romm, three lifestyle changes are key.

A 2016 study in the Journal of Obstetrics and Gynaecology Research found that a diet rich in cruciferous vegetables and fruits was correlated with reducing uterine fibroids.

An added benefit to eating fresh vegetables is that it can help cure endometriosis, Romm noted in an article, “The Natural Approach to Endometriosis: Getting to Your Root Causes.”

Endocrine-disrupting chemicals, as defined by the Endocrine Society, are “substances in the environment, food sources, personal care products, and manufactured products that interfere with the normal function of your body’s endocrine system.”

The Darker Side of Medicine

There was a whole generation of obstetricians who were trained to believe that after a woman has reached menopause, her uterus was just an excess object that could cause problems if left inside, Lang said.

“Hysterectomies are fueled by the business of medicine and reimbursement for procedures,” Lang insisted. “There’s money there. That’s the darker side of medicine that we cannot ignore.”