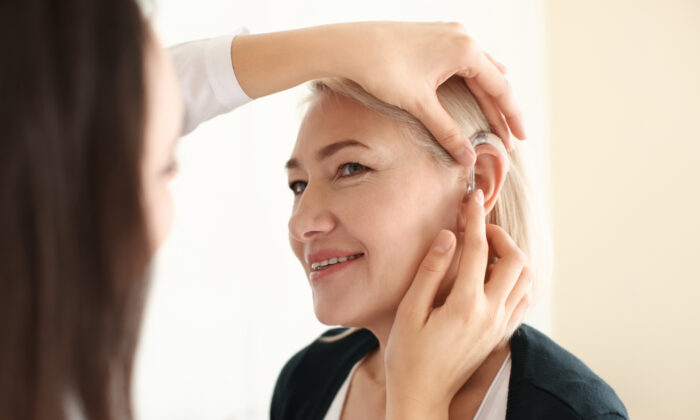 By National Institutes of Health

National Institutes of Health
A part of the U.S. Department of Health and Human Services, NIH is the largest biomedical research agency in the world.
View profile
Follow
biggersmaller
Print

One in eight people nationwide lives with hearing loss in both ears. A common cause of hearing loss is damage to the hair cells found in the inner ear. These cells detect sound waves and communicate with the cochlear nerve, which routes sound information to the brain. Loud noise, aging, and some medications can all potentially cause the loss of these delicate hair cells.

Standard hearing tests measure how well people detect certain frequencies of sound. Yet some people who have normal results on standard hearing tests may still struggle to follow a conversation in noisy environments. This type of hearing loss is sometimes called “hidden hearing loss” because it isn’t readily detected using common tests of hearing.

NIH-funded researchers led by Dr. Stéphane Maison from the Massachusetts Eye and Ear Infirmary have been studying ways to identify cochlear nerve damage, which could be a cause of hidden hearing loss. In their new study, they examined more than 95,000 word-recognition scores from hearing tests. They included scores from people with a wide range of conditions that cause hearing loss. These included aging, noise overexposure, and conditions known to specifically cause nerve damage.

The team hypothesized that people with cochlear nerve damage would have lower scores on the word recognition task than predicted by their standard hearing tests. This could happen because, although they could hear certain sounds, the nerve damage would prevent those sounds from being processed correctly by the brain. The results were published on June 23, 2022, in Scientific Reports.

The researchers found that many people had word-recognition scores that were lower than predicted by their standard hearing tests. Age-related cognitive decline wasn’t a major factor in such discrepancies. The deficits in word recognition were highest in people with conditions known to significantly damage the cochlear nerve fibers.

The team next combined the data from this study with previous work that examined the damage to the cochlear nerve during autopsies in different age groups. They used this information to develop a model that could estimate the amount of nerve, or neural, fiber loss based on the difference between predicted and measured word recognition scores.

“Now, for the first time, we know how much neural loss has to accumulate before scores on the clinical word-recognition test begin to decline. Further work is needed to improve this model and offer ways to assess neural damage in standard hearing exams,” Maison says.

“Diagnosing Hidden Hearing Loss was originally published by the National Institutes of Health.”